Gurus vs Leaders – Two Different Paradigms In Our Monetary System 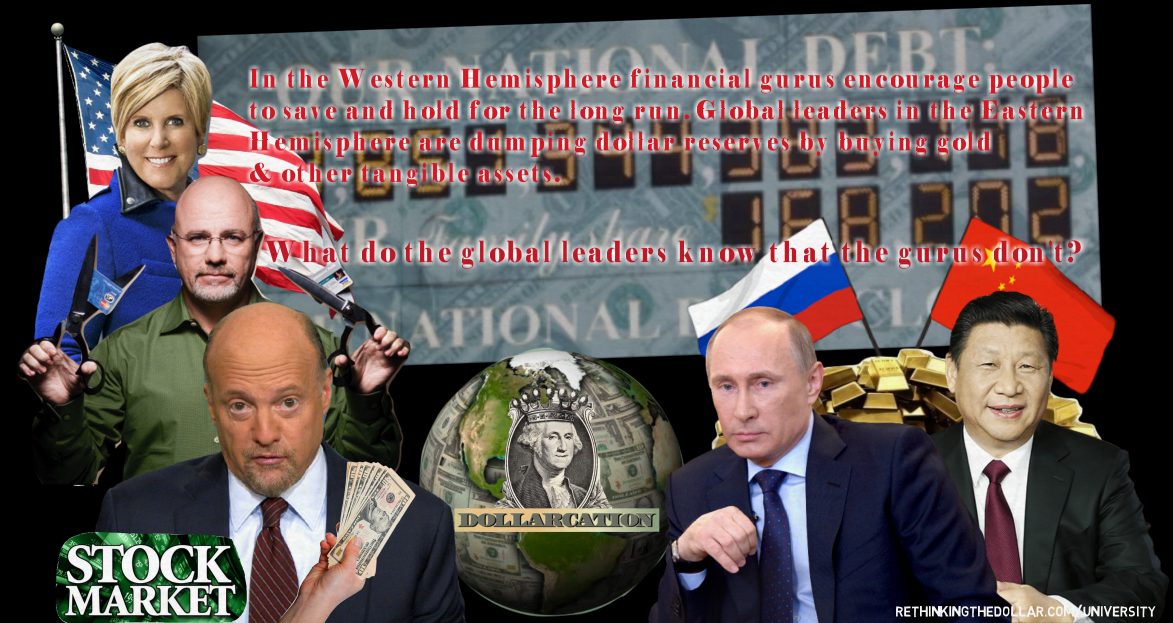 In the last decade, the world has witnessed some of the most life altering events in modern day history. There has been an increase in terrorism by new groups popping up yearly, continuous rumors of war in the Middle East as well as the threat of a nuclear response from American aggression in the northern Asia peninsula. All these threats of safety are issues the mainstream media focuses on as if that’s the only recent developments outside our nation. When it comes to the economy and the impact it has on what people should do with their money, the advice given out by the most notable financial experts tends to stay the same.

Since the dot-com stock market crash in the beginning of the 21st century, global leaders have taken notice of the response by the Federal Reserve and the United States Government. The response to the stock market crash led to what has triggered easy money policies by the Federal Reserve and deficit spending by the USA. This new norm of financial and monetary action has compromised the ability of the world to trust the United States of America with the global reserve currency.

The day the policies in the United States went from stewardship to dictatorship with the policies surrounding the dollar is the moment the monetary system shifted away from the dollar as a dependable storage of value. The western hemisphere easy money policies continued causing what would be later considered the Great Recession of 2008-09. From that point, there has been nothing except increased deficit spending by the United States Government every year since all while the bureaucrats in Washington D.C argue over whether to raise the debt ceiling. But despite all the arguing from both sides of the aisle, the national debt of the United States Continues to rise and has now surpassed $20,000,000,000,000.

The national debt continues to rise and the economy continues to stutter along with retail stores closing, entitlement spending increasing, municipal pensions failing and disposable income vanishing. Mean while the stock market and real estate valuations have become the primary indicator and measurement of personal wealth.

In this new easy money economy, the real wealth has gone to the top income holders while the gap between those that were once considered middle class and upper class have become obvious. According to recent statistics is has become apparent that most families don’t have $1000 saved up for emergencies and so they take out a few credit cards instead. This new emergency thinking of borrowing has become an epidemic with the working class of the United States and it spells trouble for our future.

The world is fundamentally changing because of the crumbling of the current monetary system which is based upon debt and deficit spending. As the United States goes deeper into debt so do the American people on average. There is no way of ever going back to what was considered normal when a person received their paycheck on a Friday, paid their bills and had a little left over to save.

As we get closer to 2020 there are already a ton of preparations by global leaders to push back against the western school of thought. No more are the days of loaning money to a dysfunctional government that’s dependent upon borrowing without taking any measures to cut spending. The Western Hemisphere realizes that the need for the Federal Reserve Note has ended. Nations no longer want to hold the liabilities of a bankrupt nation as their foreign reserves. The dollar dependency in the monetary system is over.

Since the development of organizations such as the BRICS (Brazil, Russia, India, China, and South Africa) organization has emerged along with several non-USA banking institutions (AIIB & BRICS New Development Bank) nations are figuring out how to use their own currencies to trade. Along with this new payment method is the implementation of gold back into the equation as a method to back these currencies to reassure the world that governments can’t print their way to prosperity.

This new international financing model has turned the western world model of debt and deficit spending a thing of the past. As the monetary shift moves further along the need for dollars will grow less and less. This leads to the differences in paradigms between financial gurus and global leaders.

The global leaders, primarily in Russia and China, already know the fate of the dollar. Once the dollar is exposed for the worthless piece of paper it has become then the world will turn their backs on settling trade with it. Once the dollar is abandoned on the international stage it will solely become an American citizen liability.

The problem in the western hemisphere is that the financial gurus only focus on giving financial advice based upon history and not developing trends. The usual advice to “live within your means” and “save for retirement” with this same dying currency won’t be valid for much longer. If the world is dumping dollars at an increasing rate then why are they still telling their fans and viewers to save dollars?

The answer is that the western hemisphere has yet to realize the fate of the dollar has become their biggest financial liability. If they knew that the supply of dollars was going to increase massively because of nations unloading them or the Federal Reserve banks need to print them when the next recession comes they would be skeptical to hold just dollars. The financial advice of save and hold for the long run will turn out to be disastrous when the monetary system shifts governance from the western world to the eastern world when gold is fully implemented in trade. The paradigm shift has already occurred in the eastern world now it’s just a matter of time before the western world feels the side effects of this shift.

The best advice you might not hear these days is to watch what the leaders do and rethink what the gurus teach. While the global leaders find new ways to unload their balance sheets of dollars the mainstream narrative will stay the same. The chance of anyone with a large following coming out and encouraging people to diversify their storage of wealth with unconventional forms of legal tender is unlikely.

Little do people know that if they were to research and find out what other options they had outside of Federal Reserve Notes they would see that according to the U.S. Code (Title 31 › Subtitle IV › Chapter 51 › Subchapter I › § 5103) it states that, United States coins and currency (including Federal reserve notes and circulating notes of Federal reserve banks and national banks) are legal tender for all debts, public charges, taxes, and dues. That gives the public three options of wealth storage that’s not really brought up when it comes to the traditional financial advice.

Unfortunately most people think the usage of Federal Reserve Notes is the only form of money that can be used as a monetary instrument. If financial gurus just offered a little monetary education on the role of United States coins (i.e. Silver Eagles, American and Buffalo Gold coins) as money along with Federal Reserve Notes people would have a little hedge against failing monetary policy.

The chance of that every happening is not likely so it’s sad to say only a small remnant will truly understand what’s happening with the pending monetary restructuring out of the western world’s control. However, if you managed to make it down to the bottom of this page then you’re a part of the monetary savvy that knows something is up and more likely to take action immediately.