Greece Wants ‘Wall In the Sea’ to Stop Migrant Boats, Refugees Sent Back When Homeland Safe 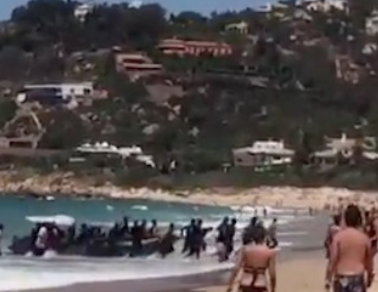 Greece Wants ‘Wall In the Sea’ to Stop Migrant Boats, Refugees Sent Back When Homeland Safe

Greece last year was the first EU port of entry for migrants and has struggled to manage the influx, with many kept in overcrowded camps on the Aegean Greek islands near the Turkish coast.

“The asylum we grant has a duration of three years, it is not indefinite,” Mitarachi told To Vima weekly.

“If conditions change in a country [of origin], asylum may not be renewed,” Mitarachi added.

“It is difficult to integrate different populations,” he said.

More than 36,000 asylum-seekers are currently crammed into camps on five islands, where the official capacity is for 6,200 people and in conditions repeatedly condemned by aid agencies.

Overpopulation in migrant camps on Lesbos and other islands near Turkey has led to an outpouring of anger in recent days among island residents and asylum-seekers.

Since the migration crisis erupted in 2015, mainly fuelled by the war in Syria, Greece has granted asylum to around 40,000 people, Mitarachi said.

Another 87,000 asylum applications are pending, he added.

Repatriation of asylum seekers whose applications are rejected are to be discussed in an overhaul of EU migration policy next month, the minister said.

The new government has introduced stricter asylum rules, and last month put out a call for a floating barrier in the Aegean to stop migrant boats.

The system — criticised as unethical and impractical by rights groups and opposition parties — could involve either barriers or nets, 2.7 kilometres (1.7 miles) long, and would be used as an emergency measure by the Greek armed forces.

Mitarachi on Sunday said the barrier project would be given a “tryout” and implemented only if deemed effective.