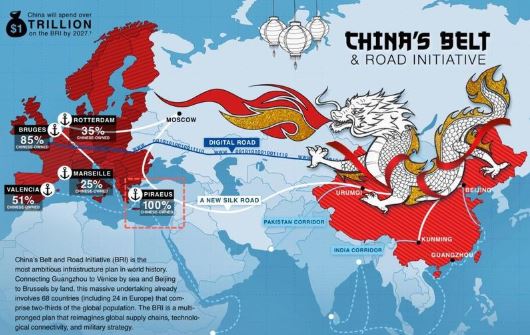 Beijing is planning on significantly boosting Chinese investment, which could lay the groundwork for a superhighway of trade between Europe & China.

Chinese President Xi Jinping is on an official visit in Athens Monday has signed 16 agreements in sectors including agriculture, energy, ports, and tourism aimed at increasing Belt and Road Initiative (BRI) projects in the European Union, reported Bloomberg.

Beijing is planning on significantly boosting Chinese investment in Greece, which could lay the groundwork for a new superhighway of trade between Europe and China.

President Xi said China and Greece “are natural partners” for the BRI. He added, “we want to strengthen the transit role of Piraeus Port to expand bilateral trade and to invest in energy, transportation, and the banking sector.”

“I think our cooperation can combine our advantages and benefit everyone. At the port of Piraeus, we can see that the result of our cooperation has made it the largest port in the Mediterranean,” Xi said.

Greece could be emerging from a decade-long financial crisis. Under the 16 agreements with China, direct foreign investment is expected to soar. One of the investment deals will allow the physical presence of the state-owned Bank of China in Athens.

China’s expansion of the BRI in Greece will likely draw notice from Athens’ western allies, especially ones from the US.

“Greece recognizes China not only as a great power but as a country that with difficultly has gained a leading geostrategic, economic, and political role,” Mitsotakis said.

Mitsotakis said, “We’re opening a road that will soon become a freeway as our cooperation will be significantly enforced.”

An agriculture agreement between China and Greece is a fresh blow to US farmers. An energy agreement could allow China to build massive solar projects across the country.

As China expands BRI projects in Europe, the Trump administration has been demonizing the BRI, that is because Washington has launched a global infrastructure development network of its own, called the Blue Dot Network.

Globalism is being fractured into East vs. West or a multipolar world.