Gold vs US Dollar Index: Correlation Is Not What Most Think 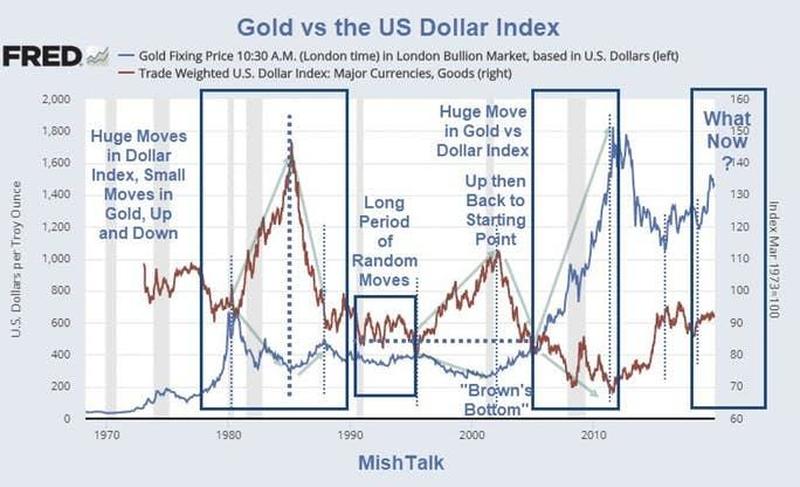 Gold is not as correlated to the US dollar as most think.

I commented on this a few days ago in Gold Surprisingly Correlated With the US Dollar.

Gold has been positively correlated to the US dollar for well over a year.

Most of the time gold is inversely correlated to the US dollar.

The problem, as the lead chart shows, is that the strength of moves in gold vs the strength in moves in the US dollar are totally random.

Look at the period between 1995 and 2005. A huge jump in the dollar index yielded a relatively small decline in the price of gold.

Between 2005 and 2012 gold went on a long one-way tear up regardless of what the dollar did. The net result was a huge blast higher in gold vs the move in the US dollar index.

That idea is more than silly as the following charts shows.

Warning: Don’t use short-term charts as a basis for making generalized statements.

That is another one of those blind statements that feeds the widespread belief that gold is largely about the dollar.

Let’s look at this still one more way.

Moreover, and as shown above, sometimes gold has a positive correlation to the US dollar and sometimes negative.

Gold then fell to $1045 with gold bears coming out of the woodwork. Moves in the dollar once again do not explain. Here is a chart that does explain.

Gold vs Faith in Central Banks

If you believe the Fed has everything under control, then the primary reason to own gold is insurance in case you are wrong.

But one look at repo action and QE that allegedly is not QE ought to be enough reason to convince anyone that the Fed does not have things under control.

I have no price target, but I do have this observation:

That is an “if and” statement, not a prediction. Yet, I do think $2000 gold has a very good shot. Dollar fundamentals help.

Authored by Mike Shedlock via MishTalk,