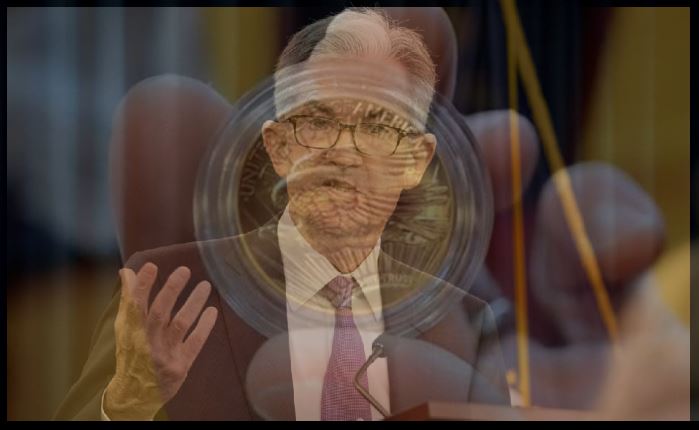 The US Federal Reserve’s Federal Open Market Committee (FOMC) today announced a 0.25% cut in the influential US federal funds rate from a target range of 2.25% – 2.50% to a target range of  2.00% – 2.25%, a move which was closely watched and widely signaled, but which was the first such fed funds rate cut in over 10 years.

As an official interest rate which affects all other US interest rates including bank-to-bank overnight loans, the US Federal Reserve uses changes in its fed funds rate to manipulate US economic growth, but its impact is even more far-reaching, influencing as it does the relative strength of the US dollar versus other currencies, and the interest rate decisions of the world’s other major central banks.

Confirmation of the cut – officially called a policy action – came at the end of the Fed’s two-day July meeting. In the hours before the Fed announcement, Comex gold dropped a few dollars to the $1420 range and the US dollar went higher, looking very like paint taping to make the market’s reaction to the announcement more muted.

With this current rate cut, its all in the timing, and today’s cut follows a 3 year period in which Fed hiked the fed funds rate 9 times between December 2015 to December 2018 from 0.25% to 2.50%. But those hikes followed an 8 year period in which the Fed held the rate at 0.25% starting with the 2008 financial crisis right up to the end of 2015. As such, this fresh fed funds rate cut is a pivotal point in the US interest rate cycle, and has the markets in consternation over whether it will be a one off easing or the beginning of a new easing cycle.

Add to the mix the already juiced up stock markets, a US president jawboning the Fed to make deeper interest rate cuts, and a Federal Reserve claiming the US economy is still strong while cutting rates, and the confusion in the markets is acute. Against this backdrop, there is a sea change in central bank interest rate thinking, with other major central banks also easing, or are ready to do so, all of which points to a horizon of currency wars, further quantitative easing (QE), and artificially low bond yields.

Singing from the Same Song Sheet

Earlier this week in Tokyo, the Japanese central bank kept its overnight rate at -0.1% (minus 0.1%), vowing to keep interest rates in negative territory, while standing ready to buy more bonds (monetize debt) and ramp up the quantitative easing it has become famous for. Given that lower US rates will mean a weaker US dollar, this in turn means relative yen strength impacting Japanese exports, so expect the Bank of Japan to counter this US rate cut will further monetary easing in the near future.

The same is true of the Eurozone, where last week the European Central Bank (ECB)  kept its deposit rate at -0.4% (minus 0.4%), with Mario Draghi preparing the market for even lower interest rates this September, and further quantitative easing in a race to the bottom in weakening the euro versus the US dollar.

We are now in a world of zero interest rates (ZIRP), negative interest rates (NIRP), distorted market prices and financial repression, an orchestrated circus coordinated by the same faces that sit on the governing board of the Bank of International Settlements (BIS) and the Group of Thirty (G30). Who moves first with the cuts is not important, but have no doubt that its a tag team effort, moving interest rates down in lockstep. As Holger Zschäpitz of Germany’s Welt commented today:

While they debase their fiat currencies, suppress interest rates, and flood the global financial system with a debt quagmire that they themselves have created, these central banks have the audacity to claim that they are the only ones who can fix the problems, problems which they spin as merely an ‘economic slowdown’ or a ‘sub-target inflation rate’, when in fact the real goal is QE to infinity.

The same easing pattern is now apparent elsewhere, with the Bank of England, Reserve Bank of Australia, and Chinese central bank all lining up to ease their benchmark interest rates. Have the world’s central banks lost control of monetary policy? Was the 2008-2009 financial crisis ever fixed or just swept under the carpet?

Despite what the central bankers say with their careful pronouncements, we now look to be on the verge of an end-game play. To prevent an implosion in the global financial system, the Fed, ECB, Bank of Japan and their contemporaries must now renew QE at all costs and provide unlimited liquidity to keep the US dollar system together, to keep asset bubbles inflated, and to inflate the debt away. Will it work? Probably not. Could this lead to global hyperinflation? Possibly.

This is where gold enters the picture, physical gold which has no counterparty risk, physical gold which has an intrinsic value. Whatever reason you choose to hold gold, and there are many, the actions of the world’s central banks at this juncture are becoming increasingly perilous. Yet for central banks, gold is financial insurance against the probability that these very same central banks know the current system is not going to last. That’s why they themselves hold gold in such vast quantities and are lining up to buy more. Across China, Russia, India, and most recently Europe.

In their own words, central banks consider gold to be a highly liquid asset for crisis protection; an emergency reserve lacking credit risk and counterparty risk; a recognized safe haven in periods of heightened economic turmoil and geopolitical tension that is independent from the economic policies of countries and monetary authorities; and an asset uncorrelated with the price movements of other assets, so providing diversification benefits. Add to this that gold can be the anchor of a new future international monetary system if the central banks so choose.

The Bank of England perhaps sums it up best with the following motivations as to why central banks hold gold:

“gold is seen as the ultimate asset to hold in an emergency and in the past has often appreciated in value in times of financial instability or uncertainty – the ‘war chest’ argument;

no default risk – gold is “nobody’s liability” and so cannot be frozen, repudiated or defaulted on;

gold’s historical role in the international monetary system as the ultimate backing for paper money;

With the spot gold price at or near highs in many major fiat currencies, today’s easing move by the Fed looks to be the first of a series and augurs well for continued gold price strength. Given 3 more Fed meetings before the end of the year in September, October and December, respectively, expect the Fed to cut rates at least once before Christmas, which means similar moves out of Frankfurt and Tokyo as the race to the bottom and the currency wars intensify.