GOLD: THE COLLATERAL OF LAST RESORT 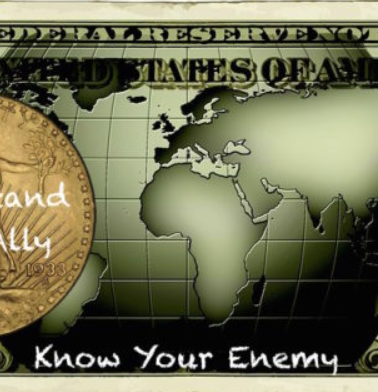 The imagery is, of course, courtesy of Homer from his epic poem Odyssey, in which Odysseus and his men have no choice but to sail through a chokepoint on which two mythical, monstrous sentries stand. Scylla was a six-headed sea monster that had a bad attitude and a taste for sailors.

Charybdis? A ship-eating whirlpool. Scholars identify Italy’s Strait of Messina – bracketed by the island of Sicily and the Calabrian coast – as the geographic inspiration for the legend. This author identifies the year ahead – bracketed by fear and monetary disorder – as the economic inspiration for the metaphor.THE MALFUNCTION OF THE GLOBAL MONETARY ORDER HAS, SINCE 2007, PLACED A PREMIUM ON COLLATERAL.

The malfunction of the global monetary order has, since 2007, placed a premium on collateral. Before that fateful year, the financial institutions that funded an ever-expanding cross-border movement of goods, people and capital did so on an unsecured basis. Short-term interbank loans required to square books, meet regulatory requirements, extend credit and speculate in markets were, indeed, unsecured. The network policed itself; its exponential growth smoothed over inconsistencies, incentivised banks to cooperate and ensured the order’s functionality.

ARE THE EUROPEAN BANKS THE NEXT VICTIMS OF THE CORONAVIRUS?

But during the global economic crisis of 2007–09, banks that met all statutory capital requirements had, rather unexpectedly, become insolvent and then needed rescue, dismemberment or burial. The survivors turned rather squeamish about it all. Uncollateralised funding became unpalatable. THE FINANCIAL SYSTEM, WHICH HAD EVOLVED OVER FIVE DECADES TO RELY ON UNSECURED FUNDING, WAS SUDDENLY FORCED TO HAVE AN EXISTENTIAL LEVEL OF INTEREST IN COLLATERAL.

The financial system, which had evolved over five decades to rely on unsecured funding, was suddenly forced to have an existential level of interest in collateral. The problem was, and remains, that there was hardly enough collateral to back the funding that supported the level of economic activity that then existed, let alone the sustainable expansion of it.

This is where gold enters the picture; it is the collateral of last resort. Gold has over the past 13 years developed a relatively consistent pattern. As the preconditions for the next financial denouement proliferate across the horizon, investors begin to batten down the hatches by placing a higher value on collateral, be it US Treasury securities, German bunds, or gold. These safe harbours appreciate either absolutely or relatively, the change in valuation a consequence of the rising anxiety levels felt by financial institutions. They fear being caught out, of being short funding, of lacking collateral to post. This is the fear of being pulled underwater. This is Charybdis.