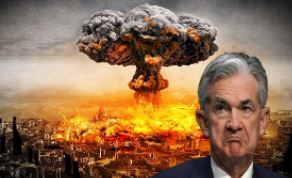 In early 1940s as World War II raged in Europe and the Pacific, the most powerful person in the world was NOT Adolf Hitler. Nor Franklin Roosevelt. Nor Winston Churchill. Nor Josef Stalin.

The most powerful person in the world was a Nobel Prize winning physicist named Arthur Compton.

Compton had been tasked by the US government to lead a group of scientists in developing a plutonium-based nuclear weapon– the same one that would be used to bomb Japan in 1945.

No one had even detonated a nuclear device or even controlled a nuclear reaction. It was all theoretical.

In fact, Plutonium had only been discovered in 1940. The entire field was brand new.

At a certain point in the project’s development, the scientists realized there was a chance that nuclear detonation could ignite the Earth’s atmosphere and annihilate all life on the planet.

Compton was head of the project, so it was up to him to decide whether or not to proceed.

Every living creature in the world– every plant, every animal, every German, every American– had a pretty serious interest in Compton’s decision.

Yet almost nobody knew his name. Or that such a decision was even being made.

Arthur Compton was not an elected official. Nobody voted whether he should have the authority to put the entire planet at risk in order to advance US interests.

Compton gave the green light, so the project went ahead as planned. And they thankfully didn’t ignite the atmosphere.

But the safe outcome was far from certain.

Even right up until the morning of July 16, 1945– the day of the first nuclear detonation in New Mexico– scientists jovially took bets with each other whether the atmosphere would ignite.

I thought about this story yesterday as the chairman of the Federal Reserve testified in front of Congress yesterday about US monetary policy.

Very few people know his name or realize that he is one of the most powerful people in the world.

That’s because, as chairman of the Fed, he heads a committee that wields dictatorial control over US interest rates and the supply of US dollars.

The US dollar is still the world’s dominant reserve currency, so the committee’s decisions directly affect the prices and values of assets, goods, and services everywhere on the planet.

EVERYTHING– from your monthly salary, investment portfolio, value of your home and interest rate on your car loan, to the price of oil in Saudi Arabia, to the inflation rate in Bangladesh– is influenced by their decisions.

That’s an enormous amount of power.

Yet just like Arthur Compton and his fellow scientists, none of these people has been elected.

The decisions they make are based solely on what’s best for the United States… even though the consequences affect nearly everyone on the planet.

And they also acknowledge they’re in uncharted waters.

The Fed Chairman told Congress yesterday that economic conditions are totally unprecedented, and that his committee has “significant humility” because so many of their basic assumptions have been wrong.

He also acknowledges that what they’re doing right now has never been tried before.

By many historic measures, the US economy has never been better.

The US unemployment rate is below 4%. GDP is growing. The stock market is at an all-time high.

These are all great signs.

Yet the Fed has cut interest rates three times this year (including a 0.25% cut just two weeks ago), and they’re printing up to $80 billion per month in new money to inject into the economy.

Those are things that a central bank does when an economy is weak.

It’s like administering a strong dose of a powerful, experimental medicine to a healthy individual; there’s not much reason to do it, and you have no idea what the reaction is going to be.

Arthur Compton and his colleagues relied on theoretical physics to make a final determination that the nuclear detonation would be safe.

The Federal Reserve’s Open Market Committee relies on theoretical economics– untested and unproven ideas– in deciding that printing trillions of dollars and slashing interest rates to historically low levels will be consequence free.

But to be frank, the Fed doesn’t have the best track record in predicting the financial crises and economic downturn that they help create.

Even when the warning signs were obvious in late 2007, just months before the crash, the Fed Chairman at the time insisted that there would be no recession.

They helped engineer that crisis with their unprecedented, experimental interest rate policy during the early 2000s. And they failed to see the warning signs.

Compton turned out to be right about nuclear detonation. And we can certainly hope that the Fed gets it right this time too.

But you might want to think about owning a bit of gold and silver… just in case these guys ignite the atmosphere.

And to continue learning how to ensure you thrive no matter what happens next in the world, I encourage you to download our free Perfect Plan B Guide.

Because… If you live, work, bank, invest, own a business, and hold your assets all in just one country, you are putting all of your eggs in one basket.

You’re making a high-stakes bet that everything is going to be ok in that one country — forever.

All it would take is for the economy to tank, a natural disaster to hit, or the political system to go into turmoil and you could lose everything—your money, your assets, and possibly even your freedom.