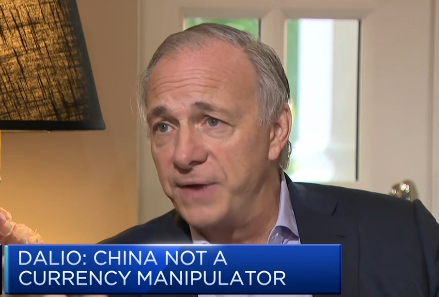 After focusing his attention on his new charitable giving initiative involving Connecticut’s schools, Bridgewater founder Ray Dalio is turning his attention back to global markets, and has delivered more of the economic doomsaying that has characterized his media appearances as of late (ever since he warned early last year that any investor holding cash would be left looking like a fool).

Dalio believes that “over the next one, two, three years” there will be a turn for the worst that will bring about an environment where there’s more excess capacity, debt restructurings and political issues entering into it. Elections in the US will have an important bearing, he said, as the conflict between capitalists and socialists intensifies political pressures.

Pressed for a more specific projection for the timing of the next recession, Dalio said he sees a 40% chance of a recession before the 2020 election – which, in theory, would be bad news for President Trump during his re-election bid.

“I think that in the next two years, let’s say prior to the next election, there’s probably a 40% chance of a recession,” he said

But are more cuts needed?

“Yes, I think you will see greater interest rate cuts as you see the global economy slowing down. I think you’re seeing that led now by the bonds. Long term rates are falling faster than short term rates, and when that happens, it means that cash is more attractive than bonds. So we’re in a situation where there’s a lot of pressure to cut rates.

As for fiscal stimulus, Dalio doesn’t think anything will happen on that front, though if Democrats take over, there could be a major rethink on that as the economy sputters.

Recession fears have been the dominant topic in financial media since the 2s10s curve briefly inverted on Wednesday, a reliable indicator for recessions during the 20th and 21st centuries.

And for what it’s worth, Dalio isn’t alone in his bearish short-term outlook. JPM analysts said in a note this week that “bottom line, we are more concerned than we were last week that economic momentum is slowing but not as concerned as the alarm bolting through rates markets. While recognizing economic data can be too backward-looking during times of rapid change, we stick with our macro indicators and see the odds of US (and global) recession in the coming 12 months closer to 40% (the average of our near-term and medium-term indicators).

Though there’s been a lot of talk of currency wars since the Treasury officially labeled China a currency manipulator for the first time in 25 years, it’s still a little premature – though ultimately analysts’ are thinking about the issue correctly. Once global central banks try easing monetary policy and find it only minimally effective (since policy was already relatively loose heading into the recession) they will pivot toward weakening their currencies to boost growth.

“So, I think we are entering an environment that, over the next three years, you will see more currency wars. And whether there are overt interventions or whether their monetary policies that produce that,” said Dalio.

Once that happens, the big question is: Will the US try to restore order, or say nothing and join the fray.