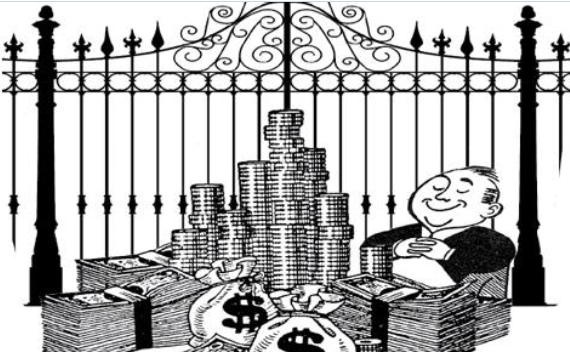 It would be wise to remember we are in uncharted waters and this market could reverse on a dime. The stories flowing out of companies such as WeWork that are burning through cash screams danger ahead! This means we should not discount the idea that those in charge might reach a tipping point where they crash the financial system for fun and profit. While this may seem outlandish the possibility is real. This doesn’t mean that every rich guy and gal would sign on to this plan, just enough to push things over the edge. When things have gone too far in one direction history shows that a correction always takes place. It could be argued we have reached that point and true price discovery has been lost.

A huge amount of money can be made during a market crash for those properly positioned. As long as the Fed and the big banks survive those who control these institutions couldn’t care less about how the 99.5% at the bottom fair. In fact, the Dodd-Frank Act which is over 2,300 pages allows this under Title II what is viewed by many as a “bank bail-in”. This is done by imposing the losses of insolvent financial companies on their common and preferred stockholders, debt holders, and other unsecured creditors including depositors.

The whole event of a “bank bail-in” can be viewed as another way to disguise a massive default and it can happen here in America. An example of just how delusional we have become as to the fragility of our financial system is that many people have taken comfort in the efforts to control the banking sector through the Dodd-Frank act following the 2008 crisis. This legislation is over 2,300 pages and still growing. Under Title II it allows the government to impose the losses of insolvent financial companies on their common and preferred stockholders, debt holders, and other unsecured creditors including depositors.

Crashing the financial system would result in wiping out the pension funds, the hedge funds, the mutual funds, and more. Of course, if such a scenario were to unfold there would be no smoking gun it would be something that “just happened.” Sure there would be a great deal of finger-pointing and experts would opine as to what went wrong and how to fix the system but things would go on. Rest assured that with so much blood in the streets little effort would be made to determine who instigated the trauma. Most likely as in the 2008 crisis, nobody would be held accountable or go to jail.

While this may seem unfathomable to many people it could happen. It also would be extremely profitable to those on the right side of a collapse. If you find this hard to stomach then imagine just how fast this could occur. Most investors think that even if things go downhill fast that they will be smart enough to get out of the markets. But what if it hits like the flash crash on steroids? Imagine a scenario where the market falls like a flash crash on steroids and investors are trapped.

Investors have been assured that can’t happen because circuit breakers have been put in place to arrest panic style moves but, if trade is halted, and the market simply does not reopen for days or even weeks suddenly it is a new game. As remote as this might seem, if it were to happen it would have far-reaching ramifications. While you are imagining this scenario realize that America’s stock market is the gold standard and consider how less stable global markets would react in countries like China and Brazil.

As for a catalyst, many exist and not all as sinister as what is being predicted by award-winning journalist Dr. Paul Craig Roberts.  The former Assistant Treasury Secretary in the Reagan Administration, who has a PhD in Economics, predicts the oligarchs of the New World Order (NWO) will do anything to boot President Trump out of office. This includes taking down and crashing the financial system as a last resort if all else fails. “They will wipe us out in order to get rid of Trump.”Dr. Roberts says forget about the Left/Right Democrat and Republican paradigm. Dr. Roberts explains, “This isn’t a Democrat vs. Republican thing…”

Adding to questions about where we are heading is just how little most people know about the economy. Years ago, Fed watchers were surprised when Ben Bernanke’s former special advisor, Andrew Levin, said that “a lot of people would be stunned to know” the extent to which the Federal Reserve is privately owned, stating next that the Fed “should be a fully public institution.” A recent post from the BOE’s Banker Underground blog looked at the question of who really owns central banks. It found that around the world, central banks have a number of different ownership structures this means who they must be accountable to varies a great deal.

Central banks, like the Bank of England, are wholly owned by the public sector. Shareholders of central banks, like the Banca d’Italia are wholly private sector entities. Other central banks, like that of Japan, are a mix of the two. The problem is that more than half of the banks the world’s central banks oversee are at risk of collapse in the next global downturn if they don’t start preparing for tough times ahead. McKinsey & Company warned in a 55-page report titled The last pit stop? Time for bold late-cycle moves, that 35% of banks globally will have to merge or sell to larger firms if they want to survive the next crisis. This adds to the notion the masses will be thrown under the bus when push comes to shove.

Returning to the crux of this article, there is a great deal of money to be made during a market collapse. Those with money can swoop in and pick up bargains when the market is not liquid and fear runs wild. This market is ripe for such a scenario and there is a great deal of money waiting in the wings for such an event. With nothing notable to invest in as of late, it is reported that Berkshire has surpassed Apple and Google as the world’s biggest corporate cash holder. In Q3 Berkshire reported a record cash pile of $128 billion.

Many economy watchers concede the decade long “great manipulation” we have witnessed will not work indefinitely, and eventually markets will come crashing down around those in charge. With this in mind, it is easy to understand the allure of being one of those that will reap a fortune when it unravels. Years ago President Eisenhower warned the American people about the Industrial Military Complex but nobody warned us an even more evil alliance that of the “Financial-Political Complex.” It would be wise to remember those at the top control the game and make the rules. In doing so, generous they are not.