The Fed’s Balance Sheet Could More Than Double QE1, 2 And 3 Combined 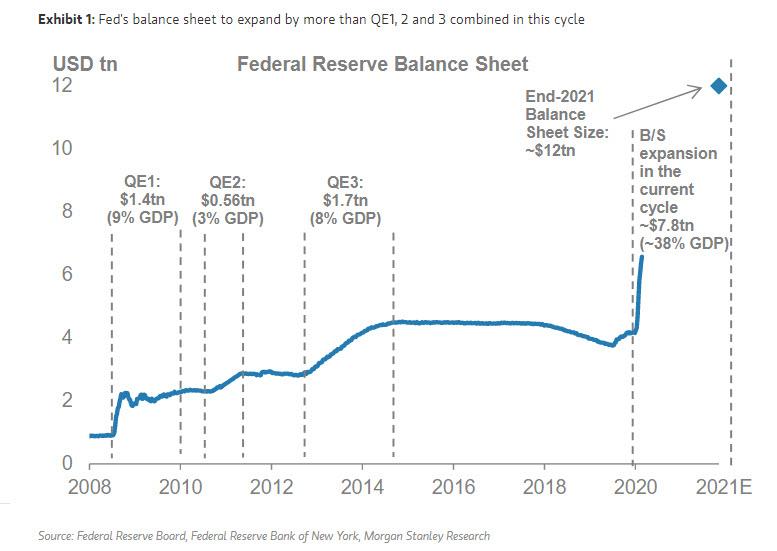 The 1Q GDP data releases for the US and euro area this week provide official confirmation of what we have known for some time – the recession has started. However, we remain of the view that this downturn will be sharper but shorter than the GFC.

To begin with, the trigger for this recession is an exogenous shock in the form of a public health crisis, rather than the classic, endogenous adjustment triggered by rising imbalances. This also did not start out as a financial crisis, and the banking system is in better shape today than prior to the GFC.

Moreover, this recession has prompted the most coordinated and aggressive monetary and fiscal easing that we have witnessed in modern times. For the G4 and China combined, fiscal deficits as a percentage of GDP will be 1.5 times GFC levels. Similarly, G4 central banks are aggressively expanding their balance sheets. The Fed’s balance sheet will expand by 38 percentage points of GDP, more than the 20 percentage points during QE1, 2 and 3 combined.

Hence, while global growth will trough at -7.5%Y in 2Q20 on our estimates (far below the -2.4%Y in 1Q09), global and DM output will reach pre-recession levels in four and eight quarters, respectively, as compared with six and fourteen quarters during the GFC.

A number of the high-frequency indicators we track suggest that the global economy is in the process of bottoming out. Consumers’ future expectations have improved, mobility trends have moved up from their troughs and consumer spending is contracting more slowly than in the early weeks of the outbreak. In the US, our IT services & payments analyst James Faucette highlights that credit card transactions data indicate that both transactions and sales have picked up in the past two weeks. Our read is that China’s economy bottomed in February, and we think the euro area has likely troughed in April with the US following suit from late April. Other regions such as CEEMEA and LatAm will bottom out later.

As economies reopen, allowing more workers to return to work, mobility trends and production levels will likely improve further, as should end demand with a lag. A phased reopening in the US and Europe is in the works for the coming weeks. In the US, some states have begun to reopen, and our US economics and biotechnology teams estimate that, by mid-May, 54% of the economy will be in a meaningful reopening phase. This estimate assumes that states will be able to reopen 28 days (Phase 2) after the peak in new confirmed coronavirus cases. European economies will also progressively reopen from early May onwards.

As we move towards this gradual reopening in parts of the world outside China, we have been closely observing developments in China to see how various sectors of the economy are normalising and how this experience may inform our outlook for the rest of the world. To be sure, our views are shaped by the path but not the duration and magnitude of recovery, considering the differences in the severity of the outbreak as well as the underlying composition of economic activity between the US, Europe and China.

In China, the manufacturing, infrastructure and construction sectors recovered relatively quickly. The manufacturing PMI is back in expansionary territory, while steel and cement demand and property sales are growing again in year-over-year terms, just ten weeks after the peak in new cases. Supply-side disruptions have eased quickly, and production levels have experienced a V-shaped recovery, which suggests that the manufacturing sectors in the US and Europe should be on a similar path post-reopening.

However, as the US and Europe are more consumption-based economies, it is the experience of the Chinese consumer that is drawing the most investor attention. Consumption in China is also showing signs of progress, but the pace of recovery has varied across different segments, and the phased relaxation of social distancing measures has dampened the overall pace to some extent.

As you might expect, sales in China’s online retail channels (which account for 30% of total sales) are back in positive territory YoY, while traffic to shopping malls sits at 70% of normal levels (even though malls are now fully open). Smartphone sales have seen a V-shaped recovery and demand for tech products has improved on a broad front according to our Asia technology analyst Shawn Kim, but spending on other consumer discretionary products is still lagging somewhat. Consumer goods (staples, home appliances and apparel) companies expect normalisation by the end of June (i.e., moving back towards normal levels of YoY growth in 2H20). Restaurants have 50-80% of their customer base back, but night life venues are still closed in Tier 1 cities and cinemas remain dark until early June. Our China consumer analyst Lillian Lou expects these channels to fully reopen by the end of June/beginning of July, and traffic to normalise in 3Q20. For the US, our branded apparel & retail analyst Kimberly Greenberger expects that some US retail discretionary spending stores will open in May but a full reopening is likely only in June. She expects a 78-85% decline for the discretionary retail segment in April, but this will materially improve to a 30-45%Y decline for the May-July period and further to a 10-15%Y decline in August-October.

The reopening of economies has prompted concerns about a second wave of infections and potential double dip in the economy. We readily admit that many unknowns concerning the virus remain, but we do expect additional waves of infections to occur. However, we take comfort that the phased reopening, the scaling up of public health authorities’ ability to test and trace on a meaningful level, the development of medical solutions to treat and prevent the disease and the awareness of the population at large mean we have a much better chance to reduce the size and scope of future outbreaks.