Fed Reveals When The Next Repo Crisis May Strike 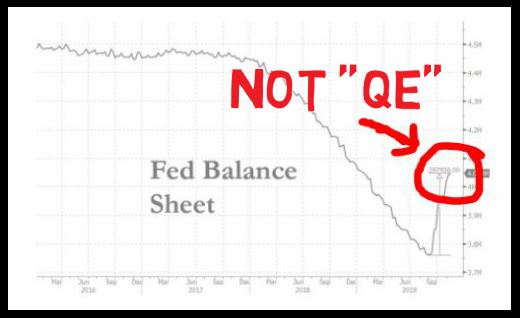 As part of today’s FOMC Minutes, the Fed also released the minutes from the October 4 ad hoc unscheduled video conference during which the FOMC agreed to unexpectedly launch POMO, reversing almost two years of QT, in order to address the crisis in the repo market by boosting the Fed’s balance sheet permanently and restoring the level of Fed reserves to their “early September level.”

What it revealed was interesting.

First, the minutes disclosed what the FOMC believes prompted the spike in repo rates in mid-September, noting that “the staff reviewed recent developments in money markets and the effect of the Desk’s continued offering of overnight and term repo operations.” Then, according to staff analysis and market commentary, it concluded that “many factors contributed to the  funding stresses that  emerged in mid-September. In particular, financial institutions’ internal risk limits and balance sheet costs may have slowed the distribution of liquidity across the system at a time when reserves had dropped sharply and Treasury issuance was elevated.”

In other words, what happened in September, when the overnight G/C repo rate exploded to 10% is that it was a little bit of everything. It also means that it was nobody’s fault because it was, by definition, everyone’s fault.

In any case, after agreeing that that preserving “control over the federal funds rate was a priority and that recent money market developments suggested it was appropriate to consider steps at this time to maintain a level of reserves” participants “expressed support for a plan to purchase Treasury bills into the second quarter of 2020 and to
continue conducting overnight and term repo operations at least through January of next year.”

Specifically, and as noted previously, the FOMC supported conducting operations “to maintain reserve balances around the level that prevailed in early September” while others were even more aggressive and “suggested moving to an even higher level of reserves to provide an extra buffer and greater assurance of control over the federal funds rate.”

There was another interesting discussion topic: how quickly should the Fed’s balance sheet rise:

We now know that the pace of purchases is $60 billion and together with the Fed’s various repo operations, the Fed’s balance sheet has increased by $285 billion in the past 8 weeks, the fastest expansion on record, surpassing QE1, QE2 and QE3. Just remember: it’s not QE!

A notable discussion took place over whether the Fed could stop pretending that it is not engaging in QE – just because it is merely monetizing T-Bills – and could expand to coupons:

A few participants indicated that purchasing Treasury notes and bonds with limited remaining maturities could also be considered as a way to boost reserves, particularly if the Federal Reserve faced constraints on the pace at which it could purchase Treasury bills.

One month ago, we said that it is only a matter of time before the Fed start monetizing 2 Year Notes, and we are happy to see that this has already been discussed by the Fed.

Another interesting point had to do with the seemingly panicked rush by the Fed to launch POMO. After all, recall that even Goldman expected the rollout of bond purchases to take place in November, after the October 31 meeting. Well, it appears that at least a “couple” of FOMC members were just as concerned by what message such a rushed rollout would send:

Most participants preferred not to wait until the October 29–30 FOMC meeting to issue a public statement regarding the planned Treasury bill purchases and repo operations. They noted that releasing a statement before the October 29–30 FOMC meeting would help reinforce the point that these actions were technical and not intended to affect the stance of policy. In addition, a few participants remarked that an earlier release would allow the Desk to begin boosting the level of reserves sooner.

A couple of participants, however, wanted to wait until the October 29–30 FOMC meeting to announce the plan so as not to surprise market participants or lead them to infer that the Committee regarded the situation as dire and thus requiring immediate action.

“Dire” and “requiring immediate action.” Got it.

Finally, as most money-market and Fed watchers expect the next repo crisis to take place around year end, the FOMC did not disagree but also noted that “money market pressures” could erupt in April 2020, around tax season:

Although money market conditions had since improved, market participants expressed uncertainty about how funding market conditions may evolve over coming months, especially around year-end. Further out, the April 2020 tax season, with  associated reductions in reserves around that time, was viewed as another point at which money market pressures could emerge.

One last point: the FOMC did mention that a Standing Repo Facility – i.e., unlimited QE for anyone and everyone who requests it – remains very much in the works:

Participants discussed longer-term issues that the Committee might want to study once the near-term plan was in place. In particular, many participants mentioned that the Committee may want to continue its previous discussion of a standing repo  facility as a part of the long-run implementation framework. Almost all of these participants noted that such a facility was an  option to provide a backstop to buffer shocks that could adversely affect policy implementation, and several of these  participants mentioned the potential for the facility to support banks’ liquidity risk management while reducing the demand for reserves.

Other participants, instead, highlighted that policy implementation had worked well with larger quantities of reserves and focused their discussion on actions to firmly establish an ample supply of reserves over the longer run.

In any case, a decision on a SRF will only be made in the future, as “a number of participants noted that a discussion of a broader range of factors that affect the level and volatility of reserves may be appropriate at a future meeting.”