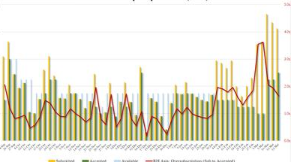 shortly after the Fed injected $95BN in liquidity via two term reports (a 2-week and the first 1-month op), it also announced $103.1BN injected via the overnight operation, which means that the Fed has injected a combined $198BN in liquidity as funding markets freeze.

Between today’s surge in FRA/OIS which briefly rose to the highest level since the financial crisis, confirming the biggest dollar funding shortage in the interbank market in over a decade…

… to the explosion in the 3-month EUR cross-currency basis is 36 basis points wider, the largest move since 2008 on a closing basis which send the global basis swap crashing…

… the Fed has found itself woefully behind the curve. As a result, moments ago, the Fed announced that it has injected the maximum possible liquidity via today’s 2 term repos, including the just announced 1-month, $50bn term repo, for a total of $45BN + $50BN.

The bank also lowered the minimum bid rate on the 2-week term repo to 0.23% from 0.59% at the original announcement.

As has been the case in the past week, both term repos were oversubscribed, with the 2-week term 1.9x oversubscribed while the 1 month was 1.7x.

Unfortunately, these operations do nothing to fix the funding squeeze and the Fed is now dangerously behind the curve meaning Powell will need to unleash a far more aggressive liquidity injection if he wants to unfreeze the funding markets which appear to be locking up by the hour.