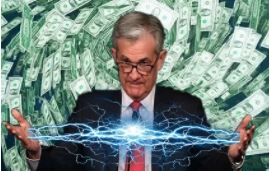 The Fed will also adjust the “timing and amounts” as necessary…

The Fed has upped the ante in its market intervention.

Statement from the NY Fed (yellow highlight added for emphasis):

Of course they’ll adjust the “timing and amounts”, and there’s a good chance it happens sooner than later.

Is this further evidence the Fed & the government are engaged in straight-up debt monetization?

Which I first asked on September 26th, in a post most would consider “conspiratorial”?

If we have started the next phase in the dollar crisis?

Which leads to the US dollar hyperinflation?

Then it’s about to be a crazy year.

And by crazy, I mean mad.

The death of the dollar.

The end of Empire.