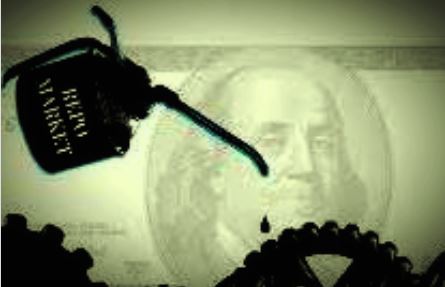 At the beginning of December, the Bank of International Settlements, presented a formerly unknown explanation for the September repocalypse, one which in addition to a sharp drop in liquidity by the “Top 4” banks, was amplified by an imbalance in demand for repo by hedge funds: “High demand for secured (repo) funding from non-financial institutions, such as hedge funds heavily engaged in leveraging up relative value trades,” was a key factor behind the chaos, said Claudio Borio, head of the monetary and economic department at the BIS.

The BIS’s finding was novel, and surprising, as it highlighted the “growing clout of hedge funds in the repo market” which in retrospect is to be expected: as we noted over a year ago, hedge funds such as Millennium, Citadel and Point 72 are not only active in the repo market, they are also the most heavily leveraged multi-strat funds in the world, taking something like $20-$30 billion in net AUM and levering it up to $200 billion. They achieve said leverage using repo.

In short, and as shown in the chart above, some of the world’s biggest hedge funds are active in the repo market to boost their returns. The problem is what happens when repo rates get unhinged as happened on September 16: for the best example of how market players react when their underlying correlations go tilt, look no further than what happened to LTCM in 1998.

This also explains why the Fed panicked in response to the GC repo rate blowing out to 10% on Sept 16, and instantly implemented repos as well as rushed to launch QE 4: not only was Fed Chair Powell facing an LTCM like situation, but because the repo-funded arb was (ab)used by most multi-strat funds, the Federal Reserve was suddenly facing a constellation of multiple LTCM blow-ups that could have started an avalanche that would have resulted in trillions of assets being forcefully liquidated as a tsunami of margin calls hit the hedge funds world.

So with hedge funds now emerging as the weakest market transmission link in any future repo market flare up, the Fed has to act, and sure enough, as the WSJ reports, in order to minimize risk during any and all upcoming repo market crises, Fed officials are considering a new tool to ease repo market stress: namely bypassing the existing system entirely, and lending cash directly to smaller banks, securities dealers and hedge funds through the repo market’s clearinghouse, the Fixed Income Clearing Corp., or FICC.

How is this different from the current system?

Well, as the BIS explained last month, hedge funds currently borrow through a process called sponsored repo, in which a large bank effectively act as a middleman or guarantor, pairing their government bonds with money-market funds willing to lend cash. The bank then guarantees that the parties will fulfill their obligations—repaying the cash or returning the securities. In the new proposal, firms trading through the FICC, would contribute to a fund that would cover a borrower’s default. However, as the WSJ notes, critics of the new plan say if the Fed lends cash directly through the clearinghouse, it could end up contributing to a hedge-fund bailout.

Which, of course is moot: when the Fed stepped in to launch repos for the first time since the crisis in September, followed by QE4 in October, bailing out hedge funds (in addition to banks, and prop desks, such as JPMorgan’s) is precisely what it did then goo. It is also hardly surprising that following the massive liquidity injection in October that continues to this day, that stocks have soared in what is virtually a straight line.

Yet while the former regime is so convolulted only a few individuals, and the BIS, get it, the new approach makes the Fed’s backstop of hedge funds far more explicit, and could also political problems for policy makers. The problem, as the WSJ notes, “centers on the central bank lending directly to hedge funds”, which already only cater to ultra high net worth clients.

Are they really the ones that so desperately need a bailout when the next crisis hits?

It doesn’y really matter because hedge fund leverage is now so intertwined with the repo market, any bailout of the banks or the financial system, also explicitly bails out hedge funds, even though “some fear that lending directly to hedge funds could lead to the perception the Fed is fueling risky bets.”

“There’s a strong aversion to fat cat bailouts,” said Glenn Havlicek, chief executive of GLMX, which provides technology to repo trading desks. Actually, Glenn, that’s news to us: the Fed did just such a bailout in September, and nobody said or thing, or noticed. Perhaps because the pathway that leads from repo to markets to hedge funds is so complex that nobody actually gets it.

Furthermore, as the WSJ notes, many, if not a vast majority, of hedge funds trade in the cash market through sponsored repos. The clearinghouse sits between buyers and sellers to ensure that neither party backs out of the transaction. Records of cleared trades also are publicly available, improving the market’s transparency.

The idea of using the clearinghouse appeals to some investors and analysts because the Fed has had trouble getting cash into the hands of the smaller banks, securities dealers and investors who need it the most. That is because the Fed trades exclusively with a small group of large banks and securities firms, known as primary dealers. Even among these firms, activity is tightly concentrated. A study recently published by the Bank for International Settlements said that liquidity in the repo market rests in the hands of the four largest banks in the U.S. system.

Incidentally, clearinghouses are also what Horseman’s Russell Clark believes will be the weakest link during the next crisis, and is how the market crash will spread (as we discussed last month). It may also explain why the Fed is quietly tiptoeing to directly backstopping clearinghouses, as it realizes that while it may backstop every bank, unless it can also save the linkages between them, the system is still in trouble.

Of course, if hedge funds at least used the repo funding for some noble, original purposes, that could at least put some favorable spin on this debate. Alas, hedge funds mostly use the borrowed repo funds just to boost leverage and increase potential gains from investments, as shown in the top chart.  Of course, such leverage can also magnify losses. And while policy makers typically haven’t encouraged the use of levered investment strategies, the wide availability of repo has made it the preferred means for hedge funds to leverage up as much as 10x.

Finally, as the WSJ correctly notes, some investors say the connections between firms involved with sponsored repos make the distinction between lending to one or the other meaningless.  Gang Hu, a hedge-fund manager at WinShore Capital Partners, said he borrows cash in the repo market to increase the impact of his investments in Treasury-bond futures and other interest-rate products.

“They are reluctant to provide a tool that would allow” overall leverage to increase beyond current levels, Mr. Hu said. “The system cannot work without leverage, but a system with too much leverage is unstable.”

And since we are now deep inside the “too much leverage” phase, the only option for the Fed is to quietly come in and backstop every repo market player, including the billionaires that get richer by the year simply be levering up on the Fed’s ongoing liquidity injections in the stock market.