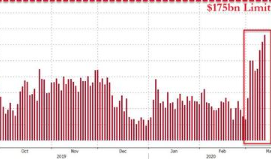 …and the market’s biggest demand yet for liquidity from its repo facility, The Fed has increased the size of its daily bailout facility.

Additionally, The Fed is offering three one-month term repo operations, with the first operation occurring on Thursday, March 12, 2020. The amount offered for each of these three operations will be at least $50 billion.

Is this going to be enough? Don’t hold your breath – As @APetimezas importantly noted:

“The Fed has injected $550 billion in reserves into the banking system since September, but excess reserves have increased by only half that amount.

Something is seriously wrong here.”

As we noted earlier, this continuing liquidity crunch is not only bizarre, but increasingly concerning, as it means that not only did the rate cut not unlock additional funding, it actually made the problem worse, and now banks and dealers are telegraphing that they need not only more repo buffer but likely an expansion of QE… which will come soon enough, once the Fed funds hits 0% in a few days and is forced to restart bond buying to prevent the next crash.

Will that be enough to stabilize the market? We don’t know, but in light of the imminent corona-recession, on Tuesday Credit Suisse’s Zoltan Pozsar repo guru published a lengthy piece whose conclusion – at least on the liquidity front – is that the Fed should “combine rate cuts with open liquidity lines that include a pledge to use the swap lines, an uncapped repo facility and QE if necessary.“