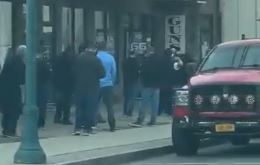 The evolution of Americans panic hoarding during the COVID-19 pandemic has ultimately led to the stocking up on guns and ammo.

Gun shop owners report while there are no weapon shortages yet, a run on ammo has undoubtedly been seen across the country.

We first documented the run on guns and ammo in mid-March, identifying shops across many states with long lines of patrons, waiting to get their hands on AR-15s, shotguns, and handguns, along with the ammo for each respective weapon.

Then we noted in early April how social unrest was developing in several states, as Americans were panic searching “buy ammo” to a degree never before seen on the internet.

In this piece, we’re going to focus on 9mm ammo specifically, and judging by internet search trends, Americans in every state are panic searching “9mm ammo” because local gun stores have limited supplies. Notice the interest over time, hitting a record high last month.

But why focus on 9mm? Well, because gun experts will say, besides a shotgun, a handgun chambering a 9mm round is an excellent self-defense round to defend your family and or yourself in emergencies.

This leads us to several ammo websites that are showing specific types of 9mm rounds are “sold out” or “on backorder:”

A crashed economy, tens of millions of Americans out of work, quarantines still in effect, massive food bank lines, health care systems overwhelmed, and social unrest unfolding across the country – many people are loading up on weapons and ammo because the country is descending into chaos.