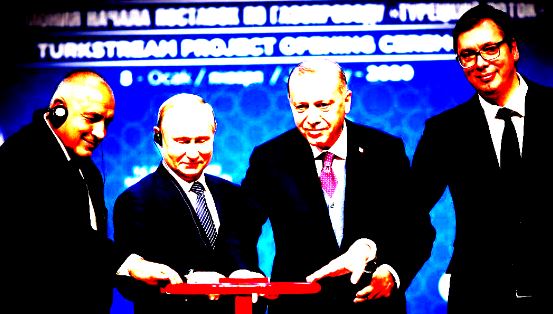 While the media and the world’s attention has been on the rapidly advancing Nord Stream 2 Russia-Germany natural gas pipeline and Washington’s attempts to stop it, another controversial pipeline to the south — also under US sanctions — has gone online Wednesday.

Also in attendance were Serbia’s President Aleksandar Vucic and Bulgarian Prime Minister Boyko Borissovalso, given the 930km pipeline with a total capacity of 31.5 billion cubic meters cuts from Russia straight across the width of the Black Sea into northern Turkey, and northwest across neighboring Bulgaria and into Serbia.

Addressing this energy opening to southern Europe, which Turkey has hailed as the “Silk road of the energy world,” Russia’s Putin said the following during formal remarks:

“The supply of Russian gas through TurkStream will undoubtedly be of great importance not only for the economy of Turkey and the Black Sea region, but will also have a positive impact on the development of many South European countries, and will contribute to improving the energy security of Europe in general.”

Putin’s remarks were a further nod to Europe’s attempts at creating “energy diversity” and independence at a moment EU leaders such as Germany’s Merkel have simultaneously slammed the Trump administration for “interference” in European energy affairs.

When President Trump signed the 2020 National Defense Authorization Act (NDAA) into law late last month, it wasn’t just European and Russian companies targeted by sanctions over their work on the Nord Stream 2 project (which resulted in the major pipeline laying company Allseas halting its participation), but the sanctions took aim at TurkStream as well, also amid deteriorating US-Turkey relations.

Russian gas producer Gazprom will ship about 3 billion cubic meters (bcm) of gas per year to Bulgaria via TurkStream, replacing a route that formerly passed through Ukraine and Romania.

Gazprom shipped about 3 bcm to Greece and about 500,000 mcm to North Macedonia via that route last year.

Russia is building TurkStream in two pipelines, each with an annual capacity of 15.75 bcm. The first pipeline will supply Turkey and the second will extend from Bulgaria to Serbia and Hungary. Bulgaria hopes to be able to make shipments to Serbia by May and build the whole section by year-end.

Washington has accused Moscow of doing everything it can to punish Ukraine after years of conflict in Donbass by ensuring it gets bypassed on natural gas piped to Europe (and thus loses vast valuable transport fees).

However, days before an end of year deadline was set to expire, Russia’s Gazprom and Ukraine signed a landmark deal to keep natural gas flowing to Western Europe via Ukraine for the next five years, which is expected to net Ukraine an estimated $7 billion (€6.25 billion) in gas transit fees by 2024, also amid a broader thawing in tensions and dramatic deescalation between Moscow and Kiev.