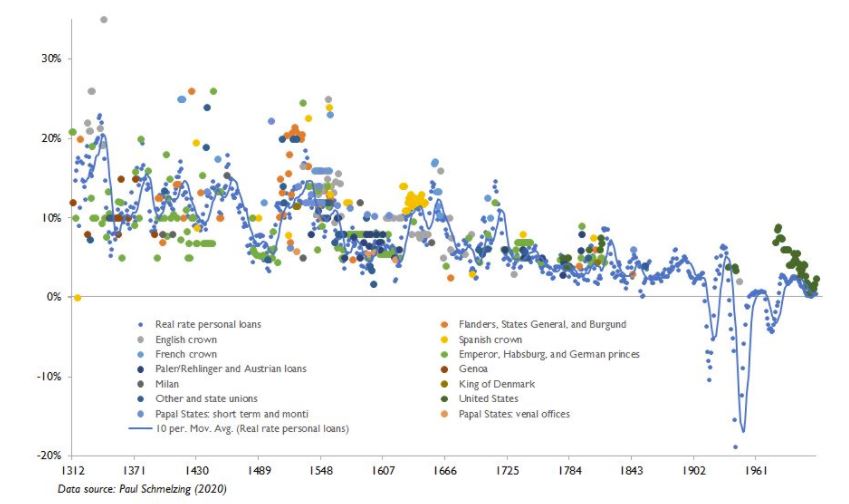 To understand the present, it always helps to step back and get the bigger picture. Which is why I want to spotlight a recent paper that mines through historical documents for 800 years worth of interest rate data.

In case you’ve missed it, many parts of the world are characterized by negative real interest rates. Investors in 5-year German bonds currently earn -0.6% per year in interest. That’s right. Investors must pay the government for the right to hold a bond for five years.

Compounding the burden of holding a German bond is inflation, which in Europe is expected to register at around 1.5% per year. Inflation eats into the value of a bond’s interest payments and principal. Combining the already negative interest rate with 1.5% inflation means that a German bond investor can expect a total negative return of around -2.1% per year.

Interest rates since 1311
On the face of it, a -2.1% return seems thoroughly outlandish. But in a recent Bank of England , economic historian Paul Schmelzing finds that negative interest rates aren’t that odd. Schmelzing has gathered an incredible 800-years of data on interest rates and inflation going back to the early 1300s.

Here is one chart that Schmelzing plots from the data he has collected.

Interest rates on 454 personal/non-marketable loans to sovereigns, 1310-1946, and U.S. EE-series savings bonds (Source: Schmelzing, 2020).
It shows interest rates on 454 loans made to sovereigns by court bankers and wealthy merchants. Data goes back to the early 1300s. These are non-marketable loans, meaning that they could not be resold on secondary markets. Included in this list is a 1342 loan made by Simon van Halen, the regent of Flanders, to the English king Edward III, to help him wage war on France. Van Halen extracted a princely 35% per year before inflation! Another loan is the Duke of Milan’s 218,072 Milanese pound debt to the Medici bank in 1459, which cost 15.4% per year.

As the chart illustrates, the real interest rate that lenders have demanded from sovereign borrowers over the last 800 years has been gradually declining. The 0.5% real interest rate on modern U.S. savings bonds, a close cousin of earlier courtly loans (they are also non-marketable) may seem low on first blush. But zooming out, the savings bond fits the trend quite accurately. It’s not far off what a lender might have expected to earn from the Habsburg Emperor in the 1790s.

Schmelzing’s paper has many curious details about medieval financial markets. Not included in his interest rate data, for instance, are loans denominated in various odd units. In times past, a lender might stipulate repayment in chickens, jewellery, land, fruit, wheat, rye, leases for offices, or some sort of entitlement. To keep calculation easier, Schmelzing only collects information on loan that are payable in cash.

Nor does Schmelzing include loans from Jewish communities in medieval times. These loans often used the threat of expulsion to extract artificially low interest rates.

To adjust the interest rate on loans for inflation, Schmelzing relies on consumer price data economic historian Robert Allen. Allen’s consumer price index baskets go back to the 14th century. He has constructed them for major cities like London and Milan using old records of items like bread, peat, wood, linen, soap, and candles. Prices are expressed in silver unit equivalents to correct for debasement of the coinage.

Cultural differences are reflected in each city’s respective consumption baskets. For instance, the English basket features butter and beer, while the North Italian features olive oil and wine. Antwerp’s series includes rye bread, but in places where rye bread wasn’t as popular (ie. London and Paris), wheat bread is substituted.

The monetary standard has no influence on the trend
To get a better feel for the the shape of interest rates over time, below is another chart from Schmelzing’s paper.

The chart uses data from UK and Italy starting in 1310, Germany in 1326, France in 1387, Spain starting in 1418 and Holland in 1400. Data from the US and Japan are integrated in 1786 and 1881 respectively. The contribution of each nation’s interest rate to the overall global measure is determined according to that nation’s relative contribution to overall GDP. According to Schmelzing, this “global” series covers the majority of advanced economy interest rates going back to the 1300s.

Schmelzing proceeds to fit a trend line to the data he has compiled. This line illustrates more clearly the general downtrend in interest rates over the last 800 years. Specifically, Schmelzing finds that rates have been falling at around 0.016% each year, or about 1.6% each century.

This downtrend has persisted despite all sorts of changes to the monetary system. Think multiple switches from gold standard to silver standard to bimetallic standard and back again. It encompasses various types of gold standard including gold coin, gold bullion, and gold exchange standards such as the Bretton Woods system. And it continues through the final shift to our modern era of fiat monetary regimes.

This persistence draws into question one of the most popular theories for low and negative interest rates. According to this theory, fiat-issuing central banks are to blame for abysmally low rates. Having freed themselves from the shackles of gold redemption several decades ago, central bankers can now set whatever arbitrarily low interest rates they need in order to keep things going.

But this can’t be. After all, the downtrend in rates long precedes the emergence of modern central banks.

There’s nothing strange about negative
Indeed, as the chart below shows, negative real interest rates were fairly common in eras prior to central banking and fiat money.

Frequency of negative long-term real interest rates, as percent share of advanced economy GDP (Source: Schmelzing, 2020)
Taking every data point from 1313 to 2018, Schmelzing plots what proportion of real interest rates were negative each year. Long before the first central banks began to be established in the 1700 and 1800s, about 10-30% of debts were already yielding negative amounts. In 1589, economies representing 47% of the advanced GDP were contracting loans at negative yields! That’s far more than today.

In fact, the anomaly in this chart isn’t today’s episode of negative rates, but the preceding 1984-2001 period. Real interest rates were incredibly high during this period. Not a single negative long-term real rate appears over that entire 17 year span, the longest such period on record, according to Schmelzing.

So when investors grumble about today’s low and negative interest rates, keep this in mind. They represent a rare generation of investors that enjoyed unusually high real interest rates during the 1980s and 1990s. If Schmelzing’s finding are to be taken seriously, low and falling rates are the historical norm. We should probably get used to this.