China slightly trimmed its holding of US Treasury bonds for the second straight month in July, continuing a downward spiral amid growing risks of greenback assets.

China cut its US Treasury bond holdings by $1 billion in July to $1.07 trillion, US Treasury Department data showed Wednesday.

As of July, China remained the second-largest foreign holder of US government debt, while Japan remained top with its US debt holdings surging $31.5 billion to $1.29 trillion. Total foreign holdings of US Treasury debt grew by $48.2 billion month-on-month to $7.09 trillion in July.

China also sold US Treasury bonds in March and April this year.

“As the yields of US Treasury bonds continue to drop, it’s more appropriate for China to reduce holdings of the greenback asset,” Tian Yun, vice director of the Beijing Economic Operation Association, told the Global Times on Thursday.

Tian said that China may continue to trim US Treasury bonds in the coming months, as risks of holding the bond is brewing due to the US Federal Reserve’s QE program, along with a recession in the US.

The US Federal Reserve decided on Wednesday to keep interest rates steady near zero for years until inflation moderately exceeds its 2 percent target rate “for some time.”

Fears of a US-China decoupling spreading to the financial arena are underpinning China’s selling of US government debt, observers said. There is a possibility that the US dollar payment and settlement system will be used to restrict China’s economic activities and China’s holdings of US assets could be affected, Tian said. 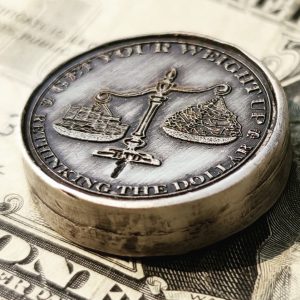 The new ‘Get Your Weight Up’ silver round available now!!!

The US Is Running Out of These 9 Foods FAST: Food Shortages From Theoretical To Real