Debtpocalypse Now: Here’s What Will Happen if US Defaults on Its Mountain of Debt 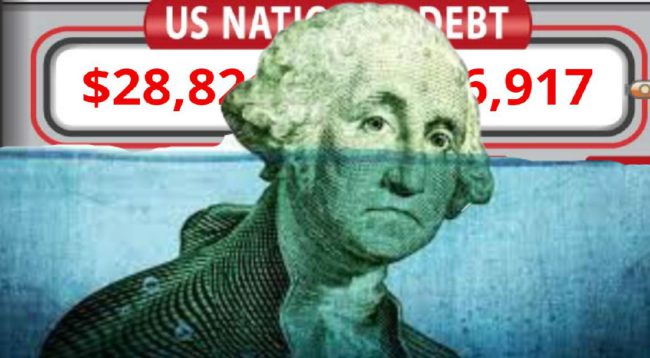 On Monday, Senate Republicans blocked legislation to raise the debt ceiling and allow the US to avoid an impending government shutdown and possible default. On Tuesday, the GOP also pooh-poohed a proposal by Democrats to allow for the debt ceiling to be raised with a simple majority vote, instead of the 60 vote supermajority ordinarily needed.

The United States is hurtling toward the historically unprecedented prospect of defaulting on tens of trillions of dollars in debt as government funding is set to expire on 30 September, the end of the current fiscal year. On Tuesday, Treasury Secretary Janet Yellen warned that the government was on track to running out of money by 18 October if the borrowing limit was not raised soon.

“It would be disastrous for the American economy, [the] global financial market and millions of families and workers whose financial security would be jeopardised by a delay in payments,” Yellen said at a hearing in Washington. “Even coming very close to the deadline without raising the debt ceiling can undermine the confidence of financial markets in the creditworthiness of the United States,” the secretary warned.

Yellen suggested that a collapse of investors’ faith in the US’ ability to pay its bills would send shocks through markets throughout the world, pushing borrowing costs to jump through the roof and threatening the dollar’s status as the world’s de facto reserve currency.

Calling on Republicans to recognise their “shared responsibility” in running up the country’s gargantuan debt, Yellen stressed that allowing the US to default on its obligations would be an entirely “manufactured crisis” that must be prevented at all costs.

What Would a Default Even Look Like, Technically Speaking?

The US has had a debt ceiling since 1917, when, during the First World War, lawmakers capped maximum allowable borrowing by the federal government at $11.5 billion. It was raised to $45 billion in 1939, and raised again more than 100 times since then, now standing at over $28.8 trillion. The United States has never defaulted on its obligations before – aside from a minor incident in 1979 involving a small number of Treasury bills during a debt showdown, which was almost immediately corrected but nevertheless caused a spike in T-bill yields and a drop in investor confidence.

At the moment, the US treasuries market has nearly $21 trillion in obligations sloshing around, and analysts simply don’t know what will happen if a default takes place – even at a technical level.

“We do not believe and the market does not believe it’s a likely scenario,” Rob Toomey, a managing director in capital markets at the Securities Industry and Financial Markets Association (SIFMA) trade group, told MarketWatch. “But it would be a real problem scenario for the system generally and operations and settlement specifically,” the expert added.

Preparing for the possibility of a default with Fedwire, a reserve settlement funds transfer system, and the Fixed Income Clearing Corporation (FICC) regulator, SIFMA says two scenarios are possible.

In the first, the Treasury would realise that it’s about to miss a payment and announce it ahead of time so that the maturity dates of bonds can be changed. This, the trade group says, would cause tremendous market uncertainty regarding future T-bill pricing, but prevent a systemic catastrophe.

In the second scenario, the Treasury does not provide advance warning, and bonds that mature simply disappear from the system, since they are automatically presumed to have been paid, with the Treasury needing to agree to make up for the loss, by offering additional interest, for example. The second scenario “just illustrates the fact that the system wasn’t designed for this,” according to the SIFMA. The group believes the second scenario is a remote possibility, but a “real problem scenario” if it happens.

Jamie Dimon, CEO of JPMorgan Chase, America’s largest bank, has confirmed that the institution was engaged in “scenario planning” for the “potentially catastrophic event” of a default.

The United States has enjoyed the status of having the world’s de facto reserve currency since the establishment of the Bretton Woods system in 1944. This status has allowed Washington to print money in excess – and to exchange dollars for real physical goods, without suffering the inflationary penalties and currency collapse that other countries would if they were to do the same thing.

In her remarks to Congress on Tuesday, Yellen warned that while “China has a long way to go in reforming its financial markets before the renminbi is a serious rival to the dollar,” she couldn’t think “of anything more harmful to the role of the dollar than failing to raise the debt ceiling.”

Perry Adair, a consultant at Becker Lawyers, a federal lobbying firm, has echoed Yellen’s concerns, telling Cnet that “internationally, the United States will have for the first time undermined the full faith and credit of its own currency,” causing “a blow to our standing in the world and a boon for our adversaries such as China who are arguing that the US is on the decline.”

The dollar has already taken a hit in recent years amid efforts by countries including Russia, China, Iran, and others to move away from dollar payments in trade, switching to euros or local currencies, and concocting other financial tools through which to escape sanctions and other forms of pressure from Washington.

Earlier this year, after slashing its holdings of both dollars and T-bills to near zero, Moscow stressed that the greenback’s use in global trade would drop once countries began to doubt its stability. The current congressional debt ceiling showdown may serve as just the impetus needed for this to occur.

An increase in T-bill yields due to their higher perceived risk would cause a major jump in borrowing costs for ordinary Americans and businesses. “Treasury yields, mortgage rates, and other consumer and corporate borrowing rates spike, at least until the debt limit is resolved and Treasury payments resume,” Moody’s Analytics wrote in a report published last week.

The ratings agency warns that even after the crisis is resolved, interest rates would remain high for a long period of time, given the perceived risk premiums associated with US debt, with home loans potentially “never” falling back to where they were before the default, resulting in an economic calamity affecting Americans for generations to come. Other loans –for businesses, consumers, students, etc. are also expected to suffer a similar fate.

Moody’s calculates that as many as six million US jobs could be lost, while wiping out 1/3 of the stock market’s value – and the equivalent of about $15 trillion in household wealth.

A default would almost certainly prompt Moody’s, Fitch, and other ratings agencies to downgrade the US’s credit rating, making it more expensive for the US to borrow new cash abroad, or service the debts it already owes.

GDP to Take a Hit Even if Compromise Found

Even if Congress does come to an agreement on the debt ceiling at the last moment, as it has failed to on previous occasions, the US economy will still be hit by the loss of investor confidence and conservative hiring policies by businesses fearing the worst. According to Moody’s, the uncertainties associated with debt limit debates in 2011 and 2013 caused GDP in mid-2015 to be an estimated $180 billion below that would it would have been if the crisis had been resolved sooner. Up to 1.2 million less Americans were able to find jobs thanks to the Congressional wrangling at that time, according to the agency.

For economies holding large amounts of US debt, a debt payment crisis in the US would cause an increase in these countries interest rates as well. Japan, for example, holds over $1.4 trillion in US treasuries, equivalent to over 20 percent of the Asian nation’s GDP. China, the UK, and Ireland hold between $323 billion to $1+ trillion in treasuries, with any contagion caused by a crisis in the US expected to quickly spread to these countries as well.

An economic recession in the US caused by default, including a near-freeze in credit markets, job losses, and a hit to GDP would impact the world economy in any scenario, given the US’ massive consuming power and market interconnections forged thanks to globalization.

“No one would be spared,” Maya MacGuineas, president of the Committee for a Responsible Budget, a Washington-based profit, recently told CNN. “It would be such a self-imposed disaster that we wouldn’t recover from, all at a time when our role in the world is already being questioned.”

Eurasia Group, a New York-based risk consultancy founded by former Obama economic advisor Ian Bremmer, estimates that there is about a 20 percent chance of a technical default taking place next month, a percentage the advisory stresses is “unusually high” given the risks involved. “Dismissing these risks is a mistake,” the consultancy warns.