Debate Is Over: “Not QE” Is Officially QE 4 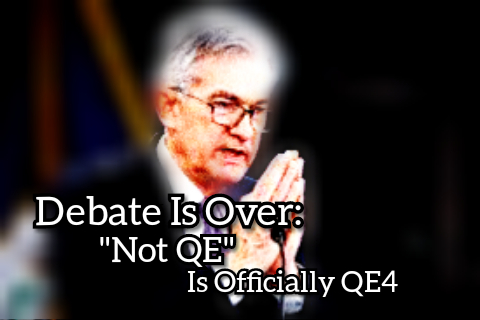 While Neel Kashkari may be theatrically appealing to the intellect of “QE conspiracists” – which as of today in addition to Robert Kaplan, Larry Kudlow and James Gorman also includes as per the chart below Bank of America, in addition to any other person with an even modest understanding of monetary policy…

… to explain to him how the Fed is moving prices with its $60BN in monthly purchases of T-Bills (something we did last week), an key development is coming that will make all such debates moot: in a few months the Fed’s “Not QE” will officially become “QE 4.”

The reason: following an update to BMO’s bill supply forecasts, the bank’s rates strategist Jon Hill sees a great likelihood that the Fed will need to reduce its “demand burden” on the bill market, i.e., there won’t be enough Bills available for the Fed to monetize without it distorting the market, and will extend the purchase program to include short coupons in the process officially ending any debate whether the Fed’s manipulation of the market under the guise of saving repo, is “Not QE”, because it is limited to Bills and thus no duration is taken out of the market, or is “QE 4”, in which the Fed purchases at least some coupon securities in addition to Bills.

Once the Fed makes the shift, BMO expects the monthly sizes of $60 bn, or $30 bn post assumed taper, would be composed of both bills and short coupons, “helping to reduce expected pressure in the bill market. “

At this point, Hill puts 75% odds on this change occurring by mid-March, meaning that any farcical “debate” whether the Fed’s injection of anywhere between $60 and $100BN in liquidity each month into the equity market, is or isn’t QE, will very soon be mercifully over.

What if BMO is wrong, and the Fed does not adjust purchases to include short coups? In that case, the Canadian banks foresees a $321 billion reduction in bill supply in Q2 2020…

… which would be the largest quarterly drop in privately available outstandings on record.

Furthermore, Hill predicts that that the Treasury’s introduction of 20-year supply would also marginally contribute to reduced Q2 bill issuance.

This squeeze is driven more by the Fed’s purchase program, rather than a sudden shift in the Treasury Department’s cash needs. Indeed, a look at borrowing needs less net coupon issuance shows Q2 2020 will be -$236 bn, essentially in line with -$229 bn in Q2 2019. In other words, what makes Q2 2020 different is the full consequences of the Fed’s footprint in the bill market.

It is also worth noting that that these figures reflect BMO’s assumption that the Fed tapers their “reserve management program” (and soon, QE-4) from $60 billion per month to $30 billion per month in mid-March, so if the tapering does not occur, the squeeze will be that much more.

Now, “why doesn’t the Fed stop their Bill (and soon Note) Purchases earlier?” one may ask? The short answer, according to Hill, is that the system still requires reserve injections – after all anything less and the equity market will crack – and the Fed wants to gradually reduce its repo footprint. While repo take-up from the Fed has fallen by $80 bn since year-end, there remains nearly $200 bn in demand. Since the beginning of December, the combined reserve management purchases plus repo injections has been approximately $400 bn.

As a result, in BMO’s baseline scenario, the bill purchase program will total $390BN by the time it is unwound (before it returns again, of course). This will continue to displace demand for Fed repo operations, but not at a sufficient pace as to allow for a full stop of the reserve management purchases before Q2. Instead, and as we predicted last October, the most prudent policy adjustment per Hill, appears to be expanding the program to include short coupons in the next couple months

One key question which may be asked by all those who still don’t get the nuance of the debate among the “Not QE” and “QE” crowd, is “what’s the hesitation for the Fed buying coupons in addition to bills?”

The answer is simple: by focusing only on T-bill purchases, the Fed was given a semantic loophole, and was able to fall back on Powell’s October 2019 vow that “in no sense is this QE”, since it’s easier to make the argument because it does not directly drive long-end yields down (of course, as we explained the mere continued injection of up to $100BN in liquidity each month is all the market cares about). This would also be the case if they only purchased coupons maturing in one year
or less.

The second reason why the Fed is reluctant to expand purchases to include short coupons is the way they have signaled their reaction function on the topic. According to BMO, “in the current framework, it appears that they would need to actually observe liquidity impairment in bills before tweaking the program details.” One reason not mentioned by BMO is that with the Fed officially set to transition to QE, it will no longer be possible for Powell to evade a discussion over the new round of monetary easing – i.e., QE4 – and the cascade of question why this is happening when unemployment is 3.5%,  when wage growth is 3.0%, and when the US economy is nowhere near a crisis like the one that launched the original QE. Unless, of course, the US is very near a crisis, and the Fed knows much more than it is letting on…

The last question: “If the Fed pivoted to short coupons, when would they announce the change?”

In terms of timing, the focus on disconnecting the reserve management purchases from true monetary policy makes it unlikely (though not impossible) that the announcement would come at an FOMC meeting.

Instead, our focus will be on the upcoming operational announcements – the next one is February 13 at 3:00 PM ET. If the FOMC wanted to signal that a pivot into short coupons was imminent, we see two primary avenues: Powell’s press conference on January 29 (he’s sure to receive a question or two on the topic) and the January meeting Minutes
which will be released on February 19.