De-dollarization Accelerated: China Offers More Methods To Diversify Away From US Dollar Debt 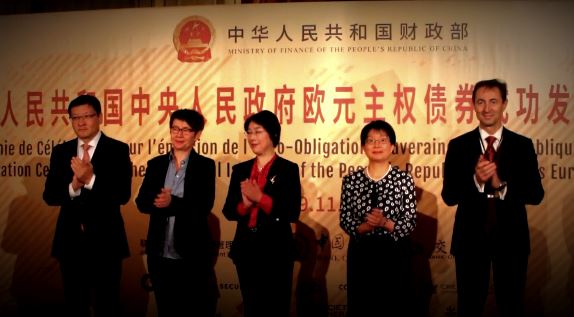 Everyone loves a good deal. Last week saw an enthusiastic market response to China’s issuance of its first euro-denominated government bonds for 15 years. But this was more than just a successful bond launch.Beijing’s timing isn’t accidental, with borrowing costs in the euro zone so low. Additionally, Chinese firms may follow Beijing’s lead and lessen their reliance on US dollar-denominated corporate debt.

On November 5, China sold €4 billion (US$4.4 billion) in a sovereign issuance with three separate maturities: €2 billion in seven-year notes, and €1 billion each in 12-year and 20-year bonds.

While these yields might not look hugely appealing on the face of it, they are in positive territory. It’s worth noting that the equivalent yield on a 10-year German government bond that very day was minus 0.32 per cent.

So, China gets to issue sovereign bonds in euros at an affordable cost while offering a return that yield-hungry euro investors find irresistible. What’s not to like? It’s “all-win”, to use a phrase of President Xi Jinping’s. But it’s way more than that.

Chinese companies have a long history of issuing dollar-denominated corporate debt. That was a great strategy when all the yuan tended to do was strengthen versus the dollar. Chinese firms could borrow US dollars with a high degree of conviction that a rising renminbi would buy more greenbacks in the future, easing the burden of eventually repaying that debt.

Times change and the yuan has shown it can weaken versus the dollar too. Furthermore, the US-China relationship has become more complicated and is likely to remain so, regardless of whether a lasting and mutually acceptable settlement of the current trade war can be reached.

But there is another angle to this story. Beijing was able to issue paper cheaply last week due to the low yields that currently characterise government bond markets in the euro zone.

Derisory and negative returns on many European government bonds across the yield curve are a continuing reminder that the euro zone’s economic recovery remains a work in progress. The European Central Bank (ECB) continues to employ both a negative benchmark rate and asset purchases in an attempt to achieve an inflation target of close to but below 2 per cent over the medium term.

Yet, in the year to September, euro-zone inflation was just 0.8 per cent, underlining the ECB’s task.In pursuit of its inflation target, the ECB, under Mario Draghi’s presidency, not only sent its benchmark interest rate into negative territory, it also purchased 2.6 trillion euros worth of assets, mostly euro-zone government bonds. Following a September meeting where the Governing Council of the ECB decided to restart asset purchases, Draghi’s successor, Christine Lagarde, can adopt a similar approach.

Christine Lagarde, the new president of the European Central Bank, passes through a turnstile gate as she arrives at the bank’s building in Frankfurt on November 4. Photo: Bloomberg

When the ECB buys up considerable amounts of euro-zone government debt, the prices of those bonds rise. And when bond prices rise, yields fall.

In its first euro-denominated bond issuance since 2004, China has been able to capitalise on a low-yield environment.

At the same time, China’s return to euro-denominated sovereign bonds may also resonate with potential Chinese issuers, who can reduce their reliance on dollar-denominated debt knowing they now have a pricing benchmark to work with.