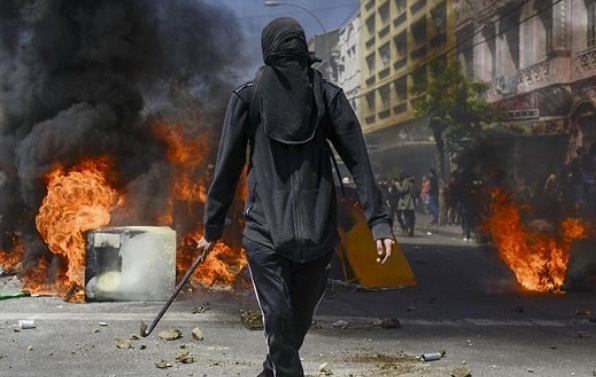 Although we Latin Americans thought Chile was immune to populism, small protests have grown into the largest ones since the nation’s re-democratization in the 90s. Initially, the protestors were groups of students complaining about a raise in the Santiago subway fare — an increase of 3.75 percent or about five US cents (which could add up to $1.15 during peak hours). They demanded that prices be held lower, and some even called for free passes.

Now, the movement has taken on a whole new character, with protestors’ complaints becoming about income inequality and a poor welfare state. Violence also entered the picture, as protestors started rioting, burning nineteen subway stations. President Sebastian Piñera then declared a state of emergency, calling in troops to restore order.

Who’s to blame? Well, protestors attribute these problems to the nefarious legacies of Augusto Pinochet’s dictatorship and its relentless implementation of a “neoliberal” agenda, with widespread liberalization of the market and privatizations in the 70s and 80s. Are their claims and requests justified? Or are they missing the entire point and advocating for bad policies? To answer these questions, we must look at some history.

Pinochet and his Legacy

Chile has always been a well-known example of successful free market reforms and their positive results. Ironically, all was done under the dictatorial regime of Augusto Pinochet, initiated in 1973, after a coup on President Salvador Allende, a socialist whose interventionist policies had led the country to ruin.

Pinochet and his economic advisors — heavily influenced by Milton Friedman and the Chicago school advisers known as the “Chicago boys” — put forth a radical economic agenda that created a boom for the Chilean economy. In addition to the removing of price controls, privatization, and deregulation, the best-known measure of the Pinochet era is its implementation of a private pension system in place of the traditional pay-as-you-go method, which inspired numerous pension reforms worldwide.

In the following decades, GDP per capita (in terms of purchasing power parity (PPP)) rose by 230 percent, life expectancy increased from 65 to 82, and inflation went down from almost 800 percent to 2 percent, all despite the population having more than doubled. Furthermore, Chile is the leader in social mobility among Organisation for Economic Co-operation and Development (OECD) countries, and its Gini index, which measures inequality, has been constantly decreasing since the 80s.

As we can see, Chile is much better off than its neighbors, and certainly much better off than Chile itself was sixty years ago. This leads to the conclusion that the claims of the students are, at least, exaggerated. But why would they protest an economic scene that has clearly improved their situation? This stems from the fact that, although free markets were largely implemented in Chile, they were not followed by a change in the political culture and in ideology, leaving the door open for statists to take back control of the narrative in the decades following re-democratization.

After the 1988 referendum, Pinochet’s dictatorship gave way to a democracy, and Christian Democrat Patricio Aylwin was elected president. Aylwin and Eduardo Frei Ruiz-Tagle, his successor, generally saw the free market reforms with good eyes and, so, didn’t bother to change the system too much. But this changed with Ricardo Lagos of the Socialist Party, elected in 2000. His Ministry of Planning and Cooperation released a report waging an official war against inequality and undermining the “neoliberal system” — as they called it. The authors went as far as stating that

the current economic system … makes individualism and competition prevail through a socio-political history of domination, exclusion and marginalization, or through class structure, or through cultural factors, like intolerance and an anti-community ethos.

This marked the beginning of the cultural domination by the socialists. Year after year, their presence in universities, the strength of unions and other interest groups, and propaganda by means of the government only grew — especially after Michelle Bachelet’s election in 2006. And it grew with no backlash, since free market advocates thought the game was over, that history had ended — to use Francis Fukuyama’s famous words — and that they could stay home, relaxing. This is, of course, absurd, and the outcome of this cultural domination could have been predicted, as Axel Kaiser did — almost prophetically — in his 2007 book El Chile que viene:

[I]n today’s Chile there is a false sense of security. Many think, for example, that it’s impossible to conceive of large-scale social outbreaks. Not to mention the army in the streets. Some even believe that we march towards development. [Italics are mine.]

In the following years, during both Bachelet’s socialist and Sebastián Piñera’s social democratic administrations, a number of reforms were passed. The tax reforms of 2012 and of 2014 increased taxes on the rich and as well as corporate tax rates — creating a more progressive tax code. The educational reform sought to end profit in education — it set a price ceiling for private schools and permitted universities to charge only the wealthier 10 percent of Chileans. And the labor reform gave more strength to unions negotiate with employers — although it still displeased syndicalist leaderships and entrepreneurs. And today, we see large-scale social outbreaks and the military in the streets.

These and other measures weakened Chile’s strong free market economy, brought about by Pinochet’s constitution of 1980. But because the constitution is so restraining to governments action, protestors are now demanding the writing of a new constitution, from a blank slate. This certainly would result in a regime much more open to interventionism, socializing education and pensions, and creating a strong welfare state.

Reactions to the Protests and Chile’s Future

The pressure seems to be working, as President Piñera has announced a list of measures as an answer to protestors:

In addition to that, Piñera also replaced eight of his ministers — in favor of a much younger cabinet — and declared that he is open to any “structural reforms” and hasn’t dismissed the idea of a new constitution. He has thus given in to the populists’ desires, and the future doesn’t look so bright.

Chile is walking on the road to serfdom, because, despite having experienced great free market reforms, there was no campaign to disseminate ideas. Ludwig von Mises taught us that “ideas, and only ideas, can light the darkness,” and Chileans skipped class. After a shock of economic liberalism, the Chicago boys and their friends closed their eyes and didn’t notice the socialists taking back control.

This is why the role of organizations such as the Mises Institute is so important. People are the agents of change, and if people don’t have good ideas, change will be for the worst. Spreading the ideas of freedom is more important than passing any major reform, because, in the long run, socialist mindsets among the people will drive public policy back towards interventionism. For any reform — or a libertarian society, for that matter — to sustain itself, it requires a continuing campaign of education, of self-awareness, and of shifting the culture towards liberty. That is what Chileans forgot.

In his 2007 book, Axel Kaiser noted that Chileans’ “advantage is due to an historical accident, which is now coming to an end.” He predicted that “Chile will show, in the coming years, that it is nothing more than any other Latin-American country.” The prospects are not good, but let’s hope Kaiser is wrong on this one.

by Matheus Vieira via Mises