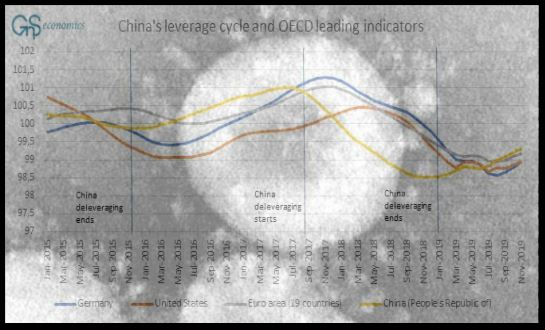 The outbreak of the coronavirus epidemic in China has shaken the global asset markets—and with good reason. The coronavirus has the potential of being the ‘trigger’ which will push the world into a global depression.

Here, we briefly explain why.

It looks that the virus spreads very easily, through droplet infection and with a “latency” period that allows infected people to spread the virus before they themselves exhibit symptoms. This implies that the virus has already spread much more widely  than original estimates indicate. The individual cases popping up across the globe are one confirmation of this.

Fortunately, the fatality rate is still relatively low:  under 2 percent. However, this can change, especially if the virus mutates, and there’s already speculation, whether the figures provided by China can be trusted.

As we have been warning through 2019 (see, e.g., this and this), China’s economy is ripe for a serious downturn. Beijing used most of its remaining firepower last year, when it desperately tried to postpone the inevitable recession, probably to appear strong in the trade negotiations.

Despite record-breaking stimulus enacted in 2019, the Chinese economy has grown at a sub-par rate of around six percent. And this is according to the official statistics!  In reality, the actual Chinese growth rate has probably been much lower.

As China’s State-Owned Enterprises, or “SOEs”, have become riddled with debt, their ability to increase production has stagnated. This has also contributed to the broader stagnation of productivity growth in China (see Figure 1). After the growth of SOEs faltered in 2017, the Chinese consumer has become an important driver of the economy.

It’s clear that the current coronavirus scare is hitting the Chinese consumer and so affecting the economy as well. The massive plunge in the price of copper—the longest since 1986—implies that the Chinese economy has come to a near-standstill.

If the virus turns into a pandemic, which is definitely possible, the economic and human costs could become very dire not just for China, but for the whole world.

Virus and the world economy

It is probable that the coronavirus will push Chinese economy into recession sometime this year. As China has led this global cycle (see Figure 2), the rest of the world will follow.

The first shoe to drop outside China is likely to be the export-and China-dependent Eurozone. And, as we have warned on several occasions, many European banks will be unable to withstand a recession (see also Q-Review 3/2019 and Q-Review 4/2019).

When the European banking crisis, driven by the ensuing recession, resumes it will “go-global” fast as Europe holds the biggest concentration of globally systemically important banks, or G-SIBs.

It is also unlikely that hyper-valued U.S. stock markets will be able to endure the impact of a global recession. This is even more the case if the Fed tapers its term repo-operations in February, as planned.

Global recession, a European banking crisis and a crash in the U.S. capital markets will produce a global economic collapse which will almost certainly overwhelm any attempts—massive and coordinated as they may be—to turn the tide by over-stretched central banks and over-indebted governments.

This is, why the coronavirus outbreak should be treated for what it is: a potential harbinger of human and economic calamity.