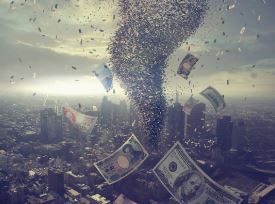 The nearest example in modern history to the present medical emergency supply shock is the Organization of the Petroleum Exporting Countries (OPEC) oil embargo of autumn and winter 1973.

That earlier shock was the catalyst to the Federal Reserve leading the world (except for Germany) along the path of intensified monetary inflation. Now, in response to the COVID-19 (coronavirus disease 2019) shock, the US is set to take the world into a new severe phase of fiat money degradation. All of this is subject to the normal proviso that history echoes but does not repeat itself.

A note on supply shocks: their essence is a sudden dislocation impeding the application of resources, whether labor or capital, to creating output. In the present situation, the spread of illness and enforced quarantines have been the first cause of production stops, starting in China.

Global supply chains have seized up. The second cause has been a more general affliction—the sudden inability of a wide range of firms around the world to deliver services free of serious infection risk or of emergency restrictive action (in which buyers later identified as potential spreaders become quarantined). We can think here of travel, hospitality, big events, education, and entertainment.

In these supply shocks there is huge uncertainty as to the extent of disruption ahead. No one knew how long OPEC would maintain its embargo or whether it would intensify.

In the case of COVID-19 the uncertainty has much to do with the unknown nature of the virus, whether it will recede seasonally, the effectiveness and speed of any vaccine yet to be developed, and length of time until governments rescind emergency actions (either in recognizing defeat or victory in the fight to contain the illness).

Commonly during these supply shocks the lead managers of the fiat money regime respond with “stimulus.” Decisions are made in the corridors of the central banks and governments regarding emergency loans to financial institutions which could become immersed in “transitory illiquidity” related to their exposure to businesses that suddenly experience cash flow crisis. Deliberations proceed quickly to countering economic downturn with monetary stimulus.

The realization is widespread, even in the private rooms of the central bankers’ club, that money printing cannot miraculously bring back lost supply. In any event, the amount of output foregone is itself highly uncertain. Very likely, when the dislocations recede, there will be some catch-up, with production well above trend as depleted inventories are rebuilt and stacked orders delivered against.

Even in the service sector the amelioration of supply conditions (which will occur if the pandemic recedes or emergency action fades and people come to an “accommodation” with the virus) could bring about a similar catch-up, with households determined to make up for the rigors of recent self-enforced isolations.

The rationale for a monetary response according to central bankers is to counter supposed demand depression stemming from the original supply disruption. In the case of the oil shock of 1973, one narrative of the would-be stimulators was that the payment of oil tax to OPEC over many years to come would depress consumer spending in the oil importing world while the new rich among the oil exporters would have endemically high savings rates.

A more urgent-sounding narrative was the need to counter a full-blown recession that was already on its way before the oil embargo struck; the Arthur Burns Fed had reacted to data shock revealing double-digit core consumer price rises by violently reversing from spring 1973 its earlier policy of powerful monetary inflation.

Now the urgent argument advanced by the central bankers for monetary stimulus is to resist a serious fall in asset prices, which could aggravate and extend the economic downturn.

Some also whisper a longer-term argument—the countering of a possibly entrenched weakness of household and business spending beyond the catch-up of economic activity that will occur once dislocations ease, as firms and households maimed during the disruption phase seek to rebuild their finances.

Who knows? There may be long-lingering brakes on investment spending as globalization slows and on consumer spending in a world where social events never recover their previous scale as participants remain subject to substantial infection risk.

The idea that central bankers by using monetary instruments can fine tune the cycle ahead and counter a presumed episode of spending weakness has no basis in fact or principle.

For the record, the Arthur Burns experiment in the aftermath of the oil embargo ended in a new bout of double-digit inflation during the economic expansion of 1975–79, with inflation barely falling at first to 5 percent (in 1976). The alternative purpose of monetary action, to prevent “asset market disinflation” such as would occur if speculative temperatures eased on a sustained basis from recent speculative highs, could well end in tears long before the November 2020 US election (and the elections in Japan and Germany scheduled for 2021).

The full extent of the further potential decay in our fiat monetary regime that central bankers around the globe, led by the Fed, could bring becomes more apparent when we consider the hypothetical world of sound money as comparison.

If subjected suddenly to pandemic, a world on the gold standard would not respond by generating monetary stimulus. Yes, there could be some serious swings in the prices of goods and services—both relative to each other and on average through the various stages of adjustment. During a lull in economic activity following the catch-up period, for example, prices could fall to a transitorily lower level. Long-term interest rates could fall during phases of weakened demand for long-term credit.

Yes, there could be some adverse events in credit markets. But that would all be par for the course, with invisible hands steering the market economy through these hazards.

Back to the real world: as the COVID-19 supply shock is erupting, the globe is already steeped in a long monetary inflation (albeit more evident in asset than in goods markets), with the Fed’s faint attempt to pull back in 2018 long aborted. The dose of monetary inflation now starting to be administered will most likely not prevent the National Bureau of Economic Research (NBER) determining a US recession with a start in 2020 and a finish in 2020 or 2021 (and included in this recession would be an intermediate phase of rebound from the most intense supply-side dislocations).

Beyond looms a powerful rise in goods and services inflation as nonmonetary forces of disinflation weaken. We should think here of a slowdown in globalization, a completion of labor market adjustment to digitalization, and anemic productivity growth (the consequence of huge cumulative malinvestment). Alongside, by contrast, asset inflation could lose some of its virulence of recent years as once popular narratives sour while credit events and increased market volatility take their toll on irrational exuberance.