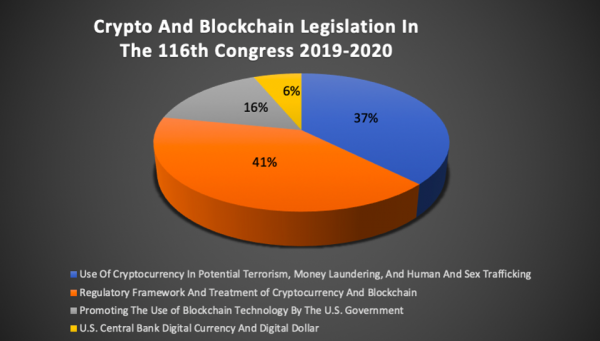 There appears to be no shortage of interest in cryptocurrency and blockchain policy in D.C. as Members in the House of Representatives and U.S. Senators have introduced a total of 32 bills in the 116th Congress.

Thanks to Facebook’s introduction of Project Libra, ongoing efforts to achieve regulatory clarity for the industry, and the novel concept of a U.S. digital dollar, the level of interest on Capitol Hill appears to have grown beyond what has typically been just a handful of legislators.

Below is a chart and a high-level summary of the various Congressional bills. Twelve bills address the use of cryptocurrency in potential terrorism, money laundering, human, and sex trafficking.

Thirteen bills focus on the regulatory framework and treatment of cryptocurrency and blockchain. Five bills promote ways blockchain technology could be used by the U.S. Government and the two newest bills cover the concept of a digital dollar.