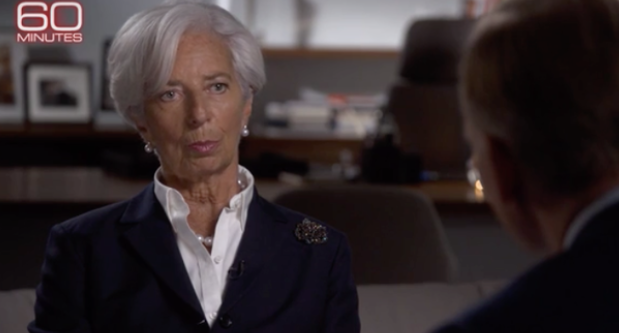 If the stock market is down or bad economic data prints, one can always assume President Trump will make time out of his day to bash the Federal Reserve on Twitter.

President Trump’s Fed bashing, sometimes a daily occurrence, if not at least several times a week, has irritated incoming European Central Bank (ECB) President Christine Lagarde, who says in an upcoming 60 Minutes interview, expected to air on Sunday, Oct. 20 at 7 p.m. ET/PT on CBS, that “Market stability should not be the subject of a tweet here or a tweet there. It requires consideration, thinking, quiet and measured, and rational decisions.”

Dickerson asks Lagarde if it’s okay if a leader [refering to President Trump] was actively criticizing a central bank head in public. Dickerson pulled a quote from President Trump’s Sept. 11 tweet, where he called Federal Reserve Chairman Jerome Powell a “bonehead” for not cutting “interest rates down to ZERO.”

The Federal Reserve should get our interest rates down to ZERO, or less, and we should then start to refinance our debt. INTEREST COST COULD BE BROUGHT WAY DOWN, while at the same time substantially lengthening the term. We have the great currency, power, and balance sheet…..

….The USA should always be paying the the lowest rate. No Inflation! It is only the naïveté of Jay Powell and the Federal Reserve that doesn’t allow us to do what other countries are already doing. A once in a lifetime opportunity that we are missing because of “Boneheads.”45.4K6:42 AM – Sep 11, 2019Twitter Ads info and privacy15.3K people are talking about this

Lagarde responds by saying, “a central bank governor does best his job if he is independent.”

According to CBS, the interview took place last month at Lagarde’s home in Normandy and the IMF headquarters in Washington, D.C.

Lagarde also criticized President Trump’s Twitter practices as a whole and his trade war with China that has sent the global economy into one of its most vulnerable periods since the last financial crisis.

She said world leaders need to find a resolution to trade disputes: “My very, very strong message to all policymakers is please sit down like big men, many men in those rooms and put everything on the table, and try to deal bit by bit, piece by piece, so that we have certainty.”

Lagarde will replace outgoing ECB Chief Mario Draghi on Nov. 01. She’s entering the position as Europe’s manufacturing complex is sliding into a technical recession along with the rest of the world.

Lagarde calling out President Trump in an upcoming 60-Minutes interview indicates that central bankers across the world are panicking to control an economic narrative that they have lost thanks to President Trump’s tweeting.

60-Minutes has an average viewership of 8 million Americans, which means central banks, led by the upcoming Lagarde interview, want to convince as many people as possible that President Trump is wrong for criticizing Federal Reserve policy, but also want to persuade millions of people that the next recession should be blamed on the president — not central banks.

For those who don’t know, Lagarde was convicted for a massive bribery scheme as French finance minister, and her latest stunt in suggesting President Trump is interfering and influencing Powell to lower rates to zero is humorous.

Largard’s absolutely disastrous tenure at the IMF, most recently the failed $57 billion bailout of Argentina through an IMF loan, has left the country of 45 million, essentially bankrupt, but more importantly, it shows that she will destroy the Eurozone as ECB head.