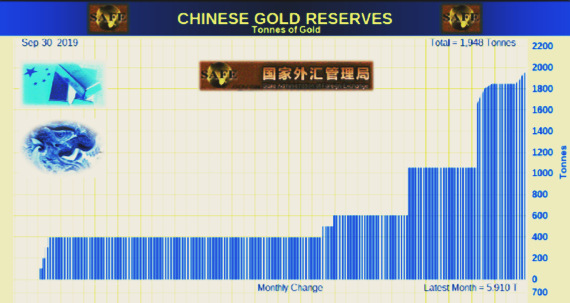 After announcing monthly gold purchases for ten straight months between December 2018 and September 2019, the Chinese central bank, the People’s Bank of China (PBoC), has now paused buying for its strategic gold reserves.

At least that’s according to October figures from the State Administration of Foreign Exchange (SAFE), China’s currency management agent, which each month announces the value of China’s foreign exchange and gold holdings for the previous month-end.

Given the pause or halt last month in China’s gold accumulation, the strategic gold reserves of the People’s Republic of China (PRC) now remain unchanged at 1948 tonnes for October. But for ten months back-to-back between December and September, the Chinese central bank claims to have added a total of 106 tonnes of monetary gold to its reserves, taking China’s strategic gold stockpile from a reported 1842 tonnes at the end of November 2018 to the current total of 1948 tonnes.

However, as with a lot of official Chinese figures, there is widespread skepticism about China’s official gold holding figures, as well as a widely held belief that the Chinese state holds far more gold than it claims to hold. This view subscribes to the opinion that China prefers to keep a large part of its gold reserves unreported as it continues to accumulate monetary gold towards or above the holdings of other economic blocs such as the Euro area or US.

A Trail of Crumbs

That’s not to say that criticism leveled against China in not being forthcoming about its national gold reserves could not be leveled against practically all the world’s central banks and monetary authorities. It could. I do not even know of even one central bank that is fully transparent about its gold holdings. Yet in a world of central bank gold holdings opacity, these official gold figures and their trajectories are arguably better than no figures at all. Crumbs to follow a trail. But better than no crumbs to follow.

Putting aside this empirical drawback, why has China decided to pause or halt state its gold buying now? In reality, the Chinese state probably has not stopped buying gold, but rather it wants to signal that it has, to perhaps thaw relations in its ongoing trade war with the US.

To see China’s stop-start gold accumulation and how it announces additions to its gold reserves when it feels like it or when politically expedient to do so, it’s instructive to look back at China’s track record in communicating its gold buying since the early 2000s. And the track record is not a pretty one when plotted on a chart, filled as it is with years and years of flat-lining, intermittent chunky jumps, and at times sporadic series of monthly moves upwards.

In early January 2002, the Chinese central bank revealed that its gold reserves stood at 500 tonnes. Previously, in late 2001, the PBoC had been reporting gold holdings of 394 tonnes, a figure which had not changed since 1980. So where did this 106 tonnes of gold come from and when was it bought?

Then towards the end of 2002, the PBoC updated its gold holdings to 600 tonnes, implying that it had purchased another 100 tonnes in less than a year. When were these purchases made? Following this for more than six years, Chinese central bank gold reserves remained completely static. In theory that it, for in April 2009 the PBoC made a shock announcement that its gold reserves now totaled 1054 tonnes. When was this 454 tonnes of gold purchased? In the world of physical gold accumulation, it is not physically possible to suddenly add 454 tonnes of gold to a central bank’s holdings by buying on the open market. True, there could have been a transfer from one central bank or the other, but no other central banks had significant corresponding gold outflows on or around that time. And we also know that the PBoC buys gold under the radar on the international market, such as in London and Hong Kong, using commercial bank agents.

“China disclosed on Friday that it had secretly raised its gold reserves by three-quarters since 2003, increasing its holdings to 1,054 tonnes and confirming years of speculation it had been buying.“

So China was buying secretly, on the q.t. Fast forward to July 2015, and the Chinese central bank did it again, announcing that it now held 1658 tonnes of gold. Another six years of static gold reserves from April 2009, and then suddenly a 604 tonne addition. When was this 604 tonnes bought? Certainly not in July 2015. Rather the PBoC continually accumulates gold, and makes announcements about its gold holdings how and when it feels like it, keeping tight-lipped for most of the time.

As the Financial Times noted in its July 2015 article “China breaks 6-year silence on gold reserves“:

“China ended years of speculation about its official gold holdings by revealing an almost 60 per cent jump in its reserves since 2009.”

Again we see in July 2015 that China for whatever reason broke its six year silence about its gold buying, not that it suddenly started buying. July 2015 also saw the PBoC begin announcing monthly gold purchases, something it continued to do until October 2016, during that time claiming that Chinese strategic gold reserves rose from 1658 to 1842 tonnes, an addition of 184 tonnes. The monthly gold buying announcements began, according to the PBoC, because it decided that it would follow the IMF’s Special Data Dissemination Standard (SDDS) for the IMF international reserves reporting template which requires contributing countries to provide updated gold reserve data to the IMF on a regular basis.

Then why did China stop announcing gold purchases in October 2016 all the way through to December 2018? If you asked the PBoC, it would answer ‘because we didn’t buy any gold during that time’. But how believable is that when China at times went for years without announcing gold purchases, only to then announce massive gold reserve increases? The same goes for China’s monthly gold purchase increases for ten straight months between December 2018 and September 2019.

On paper, there is no consistency in the communication of China’s gold buying if looked at in isolation. The communication is even less credible given that its hard to believe China still has less than 2000 tonnes of accumulated gold reserves. If China’s true gold holdings differ from what it claims, then it undermines its entire gold buying communication strategy and the international reserve reporting data that China publishes through SAFE and through the IMF’s reporting database.

It seems to be an open secret that China holds more gold than SAFE and the PboC claim. That’s if you believe the pronouncements of various important officials connected in the Chinese gold market who all see that China needs to have far more than 2000 tonnes of gold and more gold as a percentage of its total foreign reserves if it is to compete on the international stage. Its been covered here before, but is worth briefly repeating such are the size of the numbers put about at times by these Chinese officials. And there is also an acknowledgement among Chinese officials that China has to buy gold stealthy so as not to disturb the gold market.

In 2012, Zhang Bingnan, Vice President of the China Gold Association, calculated that the optimal size of Chinese State gold reserves should allow the PBoC to buy 500 tonnes of gold per year:

In July 2014, Song Xin, president of the China Gold Association (CGA), said that the PBoC should initially aim for a target of 4,000 tonnes of gold, and than towards 8,000 tonnes:

”We must raise our [official] gold holdings a great deal, and do so with a solid plan. Step one should take us to the 4,000 tonnes mark, more than Germany and become number two in the world, next, we should increase step by step towards 8,500 tonnes, more than the US.”

In 2010, a top official from the China Gold Association (CGA) speaking anonymously said that:

”Contrary to much speculation China may not buy the International Monetary Fund’s (IMF) remaining 191.3 tons of gold which is up for sale as it does not want to upset the market.

It is not feasible for China to buy the IMF bullion, as any purchase or even intent to do so would trigger market speculation and volatility.”

In March 2013, Yi Gang, the then deputy governor of the PboC reiterated the fact that China had to be cautious about official purchases so as not to upset the gold market:

”We will always keep gold in mind as an option in reserve assets and investments….we will also take into consideration a stable gold market. If the Chinese government were to buy too much gold, gold prices would surge… We can only invest about 1-2 percent of the foreign exchange reserves into gold because the market is too small.”

In a complex and international financial world, its not always fully obvious why China starts or stops announcing its gold holdings and some of its gold buying activity. In April 2009, as China announced added 454 tonnes of gold, Chinese state media said that:

“China’s increased gold reserves will thus act as a model and lead other countries towards reserving more gold. Large gold reserves are also beneficial in promoting the internationalization of the RMB [yuan].”

The timing then was also perhaps a dig at the US dollar and the effects of the 2007-2008 global financial crisis, as well as a move to remind markets that gold is an international reserve currency in waiting.

In July 2015, when China announced a 604 tonne increase in its gold reserves and began to announce monthly god buying updates, it was most likely in a beauty parade move in preparation of the yuan´s entry into the IMF´s Special Drawing Right (SDR) basket, an event which took place in October 2016 after which China promptly stopped monthly reporting of its gold buying.

In December 2018, when China began announcing a new series of monthly gold buying updates, its first gold purchase for 26 months, commentary here asked could have been connected to the US – China trade war and a “warning shot to economic adversaries such as the US that it can at any time announce gold reserve updates“.

The answer now seems to be yes, since SAFE announced the pause in China´s claimed gold accumulation on the same day this month, 7 November, that China and the US announced tariff roll backs in their ongoing trade war. So what to make of the Chinese commitment to ’provide updated gold reserve data to the IMF on a regular basis’ as per the IMF Special Data Dissemination Standard (SDDS)?

It would appear that in this case their has been a loss in translation, intentionally so, and the Chinese regard this basis more as a need to know basis, and as they are probably chuckling in the halls of state in Beijing ’a need to know basis where you don’t need to know’.