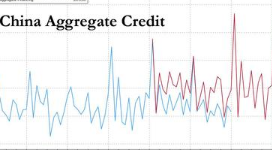 There was a palpable sense of disappointment last night when instead of cutting its benchmark overnight interest rates as some – notably Goldman Sachs – had speculated might happen, the PBOC announced that it would only lower its benchmark 1- and 5-year lending rates, i.e., Loan Prime Rate, by 10bps to 4.05% and 5bps to 4.75% respectively, a move that was widely anticipated.

The underwhelming rate cuts left analysts asking for more as consensus emerged that piecemeal lending rate cuts can only help the Chinese economy so much, especially if China is indeed set to unleash fiscal austerity as local Chinese media reported over the weekend: “The ten basis point reduction will help companies weather the damage from the coronavirus at the margins,” Julian Evans-Pritchard, senior China economist at consultancy Capital Economics, wrote in a note after PBOC published its latest loan prime rates. “But even if the … cut is passed on to all borrowers, that would only decrease average one-year bank lending rates from 5.44% to 5.34%. The ability of firms to postpone loan repayments and access loans on preferential terms will matter more in the near-term.”

However the market’s bitter taste from the underwhelming rate cut was quickly reversed after the PBOC reported its latest monthly credit data, which was a whopper, blowing out market expectations: total social financing, the broadest credit aggregate, soared by over 5 trillion yuan, the biggest one month injection on record, surprising the market to the upside mainly on higher government bond issuance. According to Goldman, “this mainly reflected the economic conditions and policy stance as the economic impacts from the virus were still rising.”

Here is the summary from the January credit stats:

Putting it in context, the total credit injection of more than 5 trillion yuan, or roughly $725 billion, in one month, was the single biggest on record.

The surge in TSF was mostly the result of another solid month in new yuan loan growth, which increased by 3.34BN, also the biggest monthly increase on record.

That said, since the local government debt does eventually enter the local economy, even if under the form of embezzlement and corruption, there is no reason to exclude it, which means that January saw the biggest credit injection in Chinese history.

But the most notable change, was the first positive print in China’s shadow banking proxy since March 2019, which increased by CNY181BN, in what according to Goldman was the “clearest policy signal” in the month’s data.

Commenting on the monthly credit data, Goldman said that January’s broad credit data mainly reflected the economic conditions and policy stance as the economic impacts from the virus were still rising, and because “activity data in February will most likely be extremely weak.”

Some more notes from Goldman:

Yet, despite the impressive record monthly injection, the next chart shows why any hopes that China can inject enough debt to reflate its way out of what is essentially a credit-driven slowdown, will be futile: as shown below, even with the biggest one month credit injection on record, M2’s annual growth dropped in February to 8.4% to 8.6%.

The bottom line: even though the coronavirus may have given Beijing just the excuse it needs for a massive debt injection, there is now so much debt in China that it is unlikely that such piecemeal injections will have much of an impact.