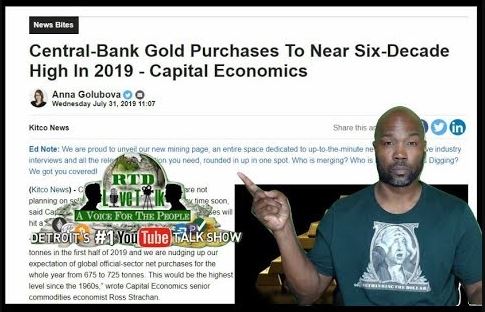 Central banks around the world are not planning on selling their rising gold stockpiles any time soon, said Capital Economics, adding that this year’s purchases will hit a 59-year high.

“We estimate that central banks bought approximately 375 tonnes in the first half of 2019 and we are nudging up our expectation of global official-sector net purchases for the whole year from 675 to 725 tonnes. This would be the highest level since the 1960s,” wrote Capital Economics senior commodities economist Ross Strachan.

The new high this year would surpass the 51-year peak the gold market saw last year when it came to central-bank purchases.

Increased interest from the official sector was triggered by a drive to diversify away from the U.S. dollar, said Strachan, noting that the trend has been very supportive of gold prices.

“We are of the view that this trend is set to continue, predicated on central banks’ desire to diversify their portfolios and, in some cases, de-dollarize their reserves,” he said.

Capital Economics upwardly revised its forecast for this year after European central banks chose to end a 20-year-old agreement that coordinated gold sales. The reason for foregoing the agreement was no plans to sell large amounts of gold.

“The signatories confirm that gold remains an important element of global monetary reserves, as it continues to provide asset diversification benefits, and none of them currently has plans to sell significant amounts of gold,” the ECB said in a statement on Friday.

The Central Bank Gold Agreement, signed in 1999, was used to stabilize the gold market by limiting large-scale sales of gold by central banks.

“The ending of the Central Bank Gold Agreement signals that worries about central-bank gold sales are firmly behind us,” Strachan said. “The original motivation had been to stem the regular practice in the 1990s of central banks selling off hundreds of tonnes of their gold reserves, which weighed on prices.”

If China were to partially back its yuan with gold it would require a gold price of $64,000 per ounce, 50 times gold bullion’s price today, according to a recent article from respected Bloomberg Intelligence.