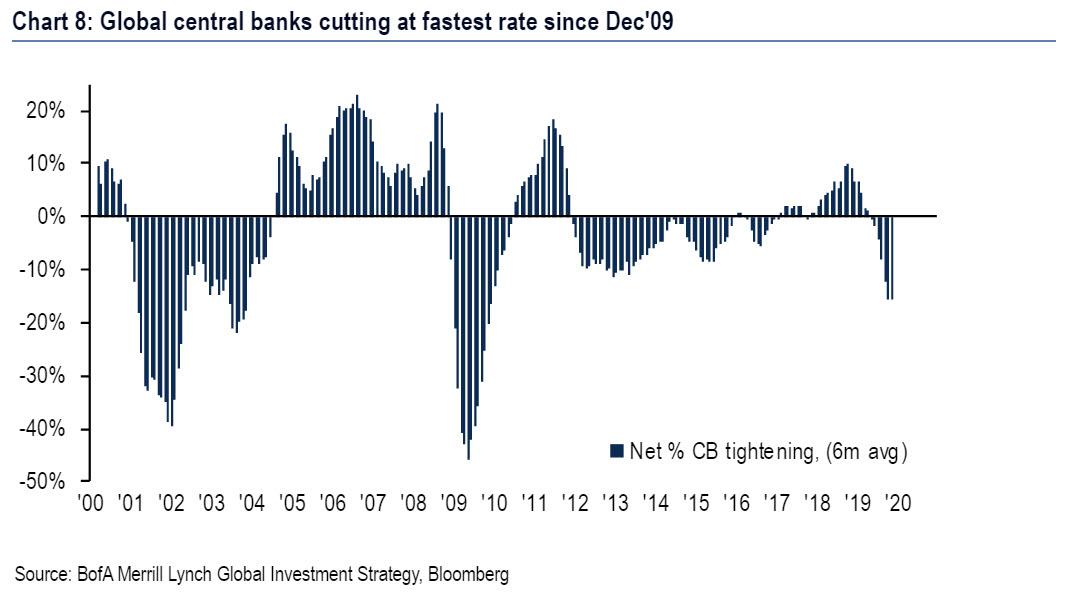 There is something very fishy about the world’s economic situation. On one hand, US president Trump keeps repeating that the US economy is the strongest it has ever been, with global strategists, economists and officials parroting as much they can, repeating that the world economy is also set to rebound sharply any minute now. And yet, two things stand out.

As we pointed out first last month, and as Convoy Investments echoed last week, with the US economy allegedly doing very well, the Fed’s balance sheet is now expanding at a rate matched only briefly by QE1, and faster than QE2 or QE3, in the aftermath of September’s repo fiasco which provided Powell with an extremely convenient scapegoat on which to hang the return of “NOT QE” (which, we now know, is in fact QE.)

The Fed’s unprecedented balance sheet expansion in a time of alleged economic stability and solid growth is a handy explanation why the S&P has been soaring in the past two months, and as we pointed out, a remarkable correlation has emerged whereby the S&P is up every week the Fed’s balance sheet is higher, and down whenever the balance sheet has declined.

And so, while helping us understand what has been the fuel for the market’s recent blow-off top meltup, the Fed’s emergency intervention does beg the question: is there something amiss more than just the repo market, and is Powell telegraphing that a far more serious crisis may be looming.

It’s not just Powell, however. It’s everyone.

Of course, back then, there was a legitimate reason for central banks to be cutting rates as if their lives depended on it: they literally did, because absent stabilization at any cost, fractional reserve banking, modern economics and the entire western way of life was on its way out in the aftermath of the Lehman failure.

Yet now there is none of that…. or so conventional thinking goes. In fact, the global economy – while sputtering – is supposedly doing just fine. And yet, central banks are acting as if a global financial crisis is just around the corner.

And here are the stats backing this up: central banks have injected $400 billion in liquidity since last Christmas, while the dovish ECB and now Fed – which added $107BN in liquidity on Friday lone – are set to boost central bank balance sheets by another $600 billion in 2020 and, as Bank of America’s Hartnett concludes “remain chief bullish support for risk assets.”

What does this all mean? It means that whereas we once joked that stocks would hit +∞ the moment World War III begins, we are now convinced – and dead serious – that algos will bid up every single asset to whatever is “limit up” (if there is one) when the next depression officially begins, frontrunning the final act, in which central banks buy every single asset out of existential desperation, as the alternative would be a world where the central planning that has defined “markets” for the past decade, is finally over.