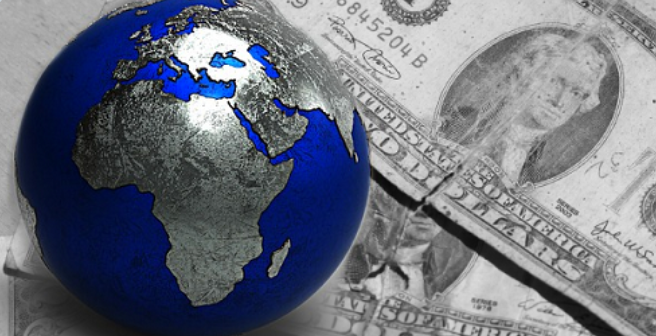 It’s not every day you hear a major financial institution hint at the possibility of the entire economic system collapsing.

The reason major financial institutions (and the mainstream financial media) shy away from a negative outlook on the economy is out of fear of triggering a kind of “self-fulfilling prophecy.” People stampeding to sell stocks and pull money out of banks could cause a vicious cycle of declines and losses.

And so these institutions tend to be positive, no matter what is really happening. But if a hungry bear is standing behind you in the woods, do you want to be “optimistic” and hope it isn’t there?

Maybe reality has finally started to sink in. Zero Hedge captured the stark state of the “system” by quoting an article from the Dutch Central Bank:

An article published by the De Nederlandsche Bank (DNB), or Dutch Central Bank, has shocked many with its claim that “if the system collapses, the gold stock can serve as a basis to build it up again. Gold bolsters confidence in the stability of the central bank’s balance sheet and creates a sense of security.”

After a part of the international banking system states the words “if the system collapses”, the obvious question to ask is:

Do they think the system will actually collapse?

Of course, it’s hard to tell exactly what will happen, and when.

That said, the DNB is moving about 31% of their gold to a military facility. They stated, “The Dutch central bank is moving part of the national gold reserves to a temporary home in Haarlem ahead of a permanent move to the new DNB Cash Centre at military premises in Zeist.”

That would be a good move in advance of a major financial crisis, if one did happen. And they aren’t the only central banking institution to move their gold in such an alarming fashion.

In 2017, Germany completed the process of repatriating its gold reserves from New York and Paris well ahead of schedule. But an article from The Street raises a red flag of concern for motive (emphasis ours):

After the financial crisis, you started seeing many European countries wanting their gold back. This whole thing started because they were more concerned about control over ownership.

Germany’s move only left 36.6% of their reserves in New York.

Inside the U.S., legislation passed in 2015 allowed Texas to repatriate its gold and create a bank in efforts to use gold and silver as legal tender.

The New American reported, “The law creating the first state-level gold-backed bank in the nation, House Bill 483, will involve repatriating about $1 billion of Texas gold from New York.”

This particular move by Texas lawmakers lays part of the groundwork necessary in case the “monetary reset” the Dutch Bank hinted at were to actually happen.

And with all of this gold flying around, and new kinds of banks being created, it begs one final and important question…

Will we get advance warning from the Federal Reserve?

If the system is heading for collapse (which the DNB is preparing for) or a monetary reset was going to be necessary, it would be nice to know in advance so you could prepare.

But that’s unlikely to be the case. Zero Hedge sarcastically observes, “We are confident that the trust-keepers of the current establishment – such as other central banks and the IMF – will be kind enough to provide ample advance notice to the citizens of the ‘developed’ world to exchange their fiat into hard assets. Or, then again, perhaps not.”

Without any notice, all you can do is stay informed and get prepared while you still have time.

One hint of things to come is buried in a 23-page speech from Mark Carney, which speaks of creating a “Synthetic Hegemonic Currency” (SHC) in efforts to end the U.S. dollar’s “destabilizing effects” as reserve currency. In that speech he said:

Widespread use of the SHC in international trade and finance would imply that the currencies that compose its basket could gradually be seen as reliable reserve assets, encouraging EMEs to diversify their holdings of safe assets away from the dollar.

So if this SHC gets widespread use, the already-weakening U.S. dollar may lose its seat on top of the reserve currency “food chain.”

Banks may return to a gold-backed monetary system in response.

Grandpa and Grandma Were Right About One Thing

It’s better to be safe than sorry.

And an ounce of prevention is worth a pound of cure.

It’s unlikely that everything is going south tonight, but if central banks and other financial institutions are preparing for the worst, it’s a good idea to also prepare.

Consider shifting some of your wealth into hard assets like gold and silver. It could prove to be a wise (and prescient) move.