#BlametheFed – The Cause of Unaffordable Housing & Diminishing Wages 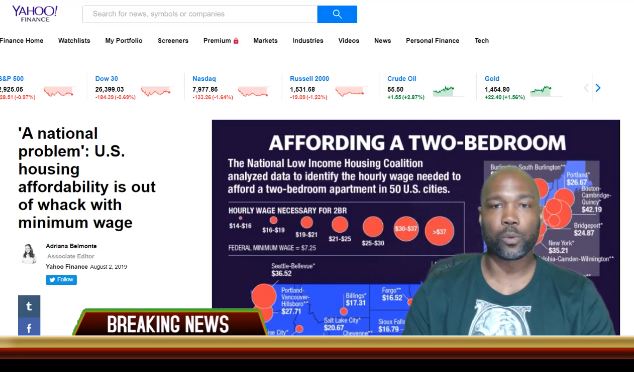 Rent affordability and minimum wage are two issues that have been brought to the forefront in recent years. A new report from the National Low Income Housing Coalition (NLIHC) highlights how the two are intrinsically tied.

Andrew Aurand, vice president for research at the NLIHC and co-author of the report, said the findings were “consistent” with what he and the other researchers already knew.

A minimum wage problem or rent affordability problem? Or both?

According to the NLIHC report, $22.96 is the 2019 national housing wage for “a modest two-bedroom rental home” and $18.65 is the baseline for a one-bedroom. Based on the $7.25 federal minimum wage, someone earning that amount would need to work 103 hours per week to afford a one-bedroom or 127 hours per week for a two-bedroom.

In the Boston-Cambridge-Quincy HMFA (HUD Metro Fair Market Rent Area), the most expensive metropolitan area in the U.S., a renter must earn $42.19 an hour in order to afford a two-bedroom apartment. In the Huntington-Ashland HMFA of West Virginia, the cheapest metropolitan area, it costs only $14.12.

So, do these findings call for a raise to the federal minimum wage — or does it raise questions about reforms to rent affordability?

“It’s really both. You can’t really probably solve it at this point,” Susan Saegert, a professor of environmental psychology and geography at the CUNY Graduate Center, told Yahoo Finance. “It doesn’t look in lots of places that you can solve it by increasing the minimum wage, although there are many places in the country where that would work and be helpful.”

She acknowledged the fact that a minimum wage hike can create a cycle of sorts, where other prices are raised as a result.

“There’s been a tendency sometimes when incomes go up, rents also go up, so sometimes it’s only a temporary improvement,” Saegert said. “Then, fixing a supply of affordable rentals is something that’s needed because there’s a shortfall and has been for a long time, and the number of people making lower incomes until the last few years has been increasing.”Story continues