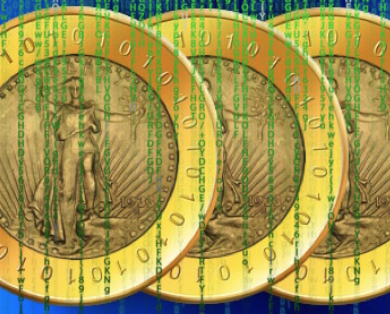 This myth that bitcoin or some other digital illusion is going to somehow transform into gold is as ridiculous as Rumpelstiltskin spinning straw into gold. The only difference is about 150 years of time between these two fairytales. Gold is a creation of God, it is finite, it is beautiful and people around the world have used as money and a store of wealth for thousands of years. Cryptocurrencies, not so much

As I was making my way through the neighborhood seeking another piece of informative news, I came across this piece. A big part of the authors argument is “scarcity” creating value. As I have heard it said before, and know it to be true from personal experience, scarcity means nothing to value. The two are not tied together.

These two characteristics, scarcity and value, meet at the intersection of demand. Without demand you have diminished value. While the current demand for both bitcoin and gold is suppressed, people around the world know something of gold and know that it has value. Try to explain bitcoin or cryptocurrencies to people living in rural areas around the world and let me know what you find out. Without high speed internet connection, well, do you have anything in a cryptocurrency? A piece of gold in your pocket or worn as jewelry, doesn’t really care where it is located or wether there is an internet connection of any kind. Gold just is.

Now someone seem to believe there is going to be a grand awakening or currency implosion creating massive demand for bitcoin within the next 93 days!! That’s a very specific timeline. Seems a little bold in my opinion, but, maybe they will be right and we will see massive change and gold will absolutely explode to the upside. It wouldn’t surprise me in the least, however, I am more skeptical than optimistic.

With May’s Bitcoin halving event drawing ever closer, Coinbase recently took to pushing the “Bitcoin as digital gold” narrative. In a tweet-storm to promote an accompanying blog-post published Feb. 7, it covered the key reasons why the halving and subsequent supply rate reduction will further cement that link.

Since the gold standard was broken in 1971, the dollar’s value has declined and gold’s value, in dollar terms, has risen over 4000%. Gold has more value than similar metals such as copper due to its relative scarcity and difficulty to acquire.

Bitcoin has been designed to be scarce like gold and is artificially difficult to acquire through the Proof-of-Work process of mining. However, it also has an advantage over gold in being transferable through a communications channel.

“Armed with a myriad of technological advantages, accelerating development, and maturing global market, Bitcoin is a store of value to rival gold in the digital age.”

The supply of Bitcoin is limited by design, with new tokens being minted as a reward every time a block of transactions is mined. The initial reward level of 50 BTC per block has already undergone two halving events, bringing it down to the current 12.5 BTC per block.

After the May 2020 halving, mining rewards for each new block, mined approximately every ten minutes, will reduce to 6.25 BTC. This will bring the supply issuance of Bitcoin to a rate of around 1.7% per annum.

Stock-to-flow (S2F) is a measure of new supply rate over total supply, and post-halving, Bitcoin’s S2F scarcity will be on a par with gold’s.

“Gold’s stock to flow is higher than any other metal commodity, and bitcoin is set to soon follow,” notes Coinbase.

No value without demand

S2F forecasts for the price will fail if there is no demand, and this holds true for fiat money, as much as any other commodity. As central banks increase the money supply, economies can sometimes prosper. However, if money supply overwhelms demand then hyperinflation events can occur.

Such events drive demand for safe havens such as gold and Bitcoin, and recent economic fear is reaching all-time highs, according to the Global Economic Policy Uncertainty Index.

This, along with Bitcoin’s myriad of technological advances and accelerating development, justifies Bitcoin’s title as digital gold, according to Coinbase.

As Cointelegraph reported, senior employees of Coinbase and Ripple recently formed a working group to advise United States regulators on policies to encourage innovation in the sector.

Not sure what to think, but, as I have been saying for the past decade, you know how long these digital illusions have been around, their purpose is digital enslavement. Blockchain tracks each transaction and ties all the transactions together in a single, linear line of transactions. I find the first transactions and carry it through to infinity by using blockchain technology. You would never know a gold transaction ever occurred if you weren’t told about it. Good luck with that whole “bitcoin is gold in 93 days” concept. Got physical gold?