Bitcoin And Bullion Blasted As Traders Sell Everything 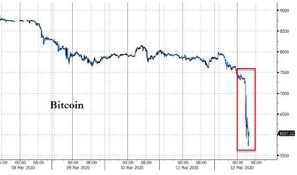 It’s a bloodbath out there. For now, only bonds are higher in price as it seems traders are selling everything that is not nailed down in order to meet margin calls or simply reduce overall uncertainty.

Crypto markets are a sea of red with everything crashing together…

On a more hopeful note, CoinTelegraph reports that the CEO of derivatives giant BitMEX said yesterday that Bitcoin (BTC) will likely hit lower levels of up to $6,000 but will avoid bigger losses.

In the latest edition of the exchange’s Crypto Digest on March 12, Arthur Hayes joined other trading sources warning that Bitcoin was not safe from current market turmoil.

Hayes stated that the content of the post should not be republished or reproduced outside of its original location.

On Twitter, he described it as “a look into my trader brain during this time of intense market volatility.”

In the short term, Hayes thinks that BTC/USD is headed to a maximum floor of $6,000 as coronavirus panic takes its toll on sentiment.

The situation will be compounded by hedge funds selling coins into an already downward-facing market due to distress calls from traders.

Hayes still believes in the cryptocurrency’s status as a safe-haven asset and added that $20,000 is a possible target for a bounce before the end of 2020.

As Cointelegraph reported, analysts remain risk-averse on Bitcoin in light of its recent behavior. Having previously risen in the face of pandemonium across global markets, the gains rapidly gave way to losses in March.

On Thursday, BTC/USD hit its lowest levels of 2020, with Cointelegraph Markets’ Michaël van de Poppe eyeing a potential support floor as low as $6,154.

According to the Crypto Fear & Greed Index, which measures investors sentiment as a means of price prediction, “extreme fear” is now what characterizes the market.

And alongside cryptos, gold is also getting dumped…

And SPY, the S&P ETF suggests that the market is set to fall notably below the futures limit-down level…

This is liquidation… of everything.