Bernanke Says Fed Has the Tools to Fight Next Recession 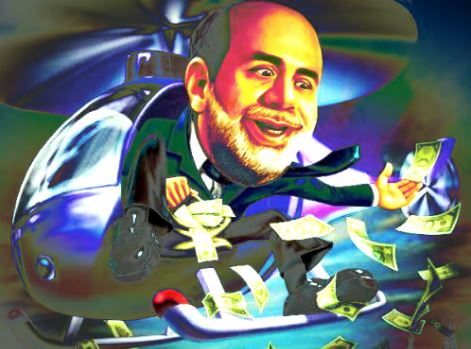 Former Federal Reserve Chairman Ben Bernanke delivered what he called “a relatively upbeat” assessment of the U.S. central bank’s ability to fight the next recession.

While the Fed has limited room to cut short-term interest rates because they’re already so low, Bernanke argued that quantitative easing and forward guidance could provide enough extra punch to combat a future economic contraction.

“The new policy tools are effective,” Bernanke said in a blog post summarizing his address to the American Economic Association’s annual meeting on Saturday. “Quantitative easing and forward guidance can provide the equivalent of about 3 additional percentage points of short-term rate cuts.”

Bernanke said the Fed should also consider adopting some of the tools employed by other central banks, including yield curve control out to two years and funding for lending programs. He counseled the Fed against ruling out the possibility of pushing short-term interest rates below zero — something which many current policy makers have come very close to doing in their public remarks.

No matter what approach the Fed adopts to fight future recessions, longer-term yields will probably spend extended periods of time at zero or below, according to Bernanke, now a Distinguished Fellow at the Brookings Institution in Washington.

That may pose risks to financial stability. “Monetary easing does work in part by increasing the propensity of investors and lenders to take risks,” Bernanke said. “Vigilance and appropriate policies, including macro-prudential and regulatory policies, are essential.”

His estimate of the impact of QE and forward guidance assumes that the Fed adopts a policy of promising not to raise rates from zero until inflation reaches 2%. While policy makers are considering changes in their approach to achieving their inflation goal, it’s not clear they would go as far as that.

Bernanke said his judgment that monetary policy will be able to combat the next recession also rests on a crucial hypothesis: that the neutral level of short-term rates which neither spurs nor restricts economic growth is between 2% and 3%.

If the equilibrium rate is much below that, as some Fed research has suggested, then QE and forward guidance won’t be sufficient to fight off a downturn. “In that case, other measures to increase policy space, including raising the inflation target, might be necessary,” he said.

Fiscal policy may also have to play a more central role in countering a contraction — a possibility that the government should be preparing for now, Bernanke said.

Bernanke said that monetary policy has almost come full circle since the days of the late Fed Chairman Paul Volcker. Now the problem is not that inflation is too high, it’s the risk that it’s too low.