Banks Brace For A Historic Crash With Record Loss Provisions 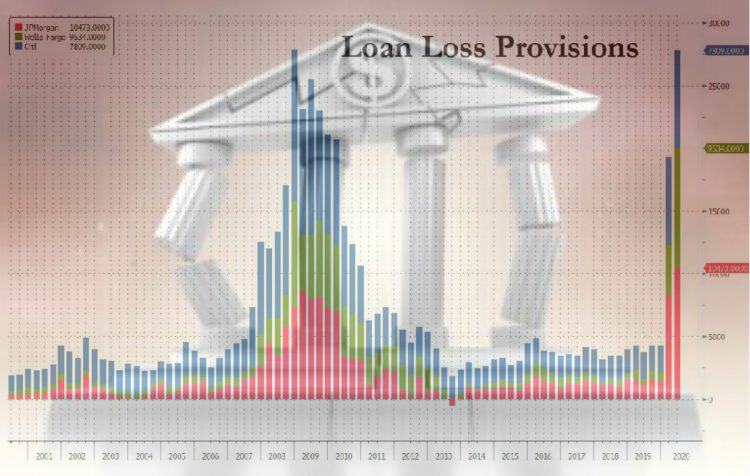 For many years after the financial crisis, US commercial banks were mocked when instead of generating earnings the old-fashioned way, by collecting the interest arbitrage on loans they had made, or even by front running the Fed with their prop (and flow) trading desks, they would “earn” their way to just above consensus estimates by releasing some of their accumulated loan loss reserves, an accounting gimmick if there ever was one, which would end up boosting the bottom line thanks to a few “kitchen sink” quarters in the aftermath of the Lehman bankruptcy.

The thinking here went that having suffered massive losses during the financial crisis, when all banks suffered crushing losses so they would then get bailed out, these same banks would then “recoup” billions in losses over time that would be run through the income statement as a reversal of accrued loss provisions.

Well, after the longest expansion in history, this process has gone aggressively into reverse, and instead of releasing loan loss reserves the banks are now building them up again as the “biblical” wave of consumer and corporate defaults due to the US economic shutdown hits US banks.

We first made this observations exactly one month ago when in “Houston: The Banks Have A Huge Problem” we said, and we quote…

… on average most banks – this time including the hedge fund known as Goldman Sachs which has since pivoted to becoming a subprime lender to the masses with “Marcus” – saw their loan loss provisions surge by roughly 4x from year ago levels, with JPMorgan’s jumping the most, or just over 5x, hinting the other banks are likely underprovisioned for the storm that is coming.

Alas, these provisions amounts are nowhere near enough if history is any indication.

Once again we were right, because as the first three reporting banks revealed today, the economic situation – as observed by the same banks that have the bird’s eye view over the economy and what is coming, in the form of non-payment on their existing loans – is about to get far worse, and as shown in the chart below, Q2 loss provisions surged from Q1 – just as we said they wold.

Here are the facts: JPMorgan, Citigroup and Wells Fargo (BofA, and a bunch of other banks are set to report on Thursday) set aside almost $28 billion for bad loans inQ2, up almost $10 billion from last quarter, rising to a level just barely surpassed only once before, during the depths of the financial crisis in Q4 2008. While Bloomberg says that “the total was higher than analysts had expected”, it was in line with what we said three months ago would happen, with all three lenders saying their economic outlook had deteriorated as the coronavirus continues to rage through the U.S. Total Q2 provisions brought the three banks’ 2020 total to $47 billion, more than those firms set aside in the last three years combined.

And it would have been far, far worse had the Fed not nationalized the bond market, allowing banks such as JPM to literally print money by issuing hundreds of billions in risk-free bonds and stocks.

Unfortunately, while banks may have avoided the full brunt of the covid depression this quarter thanks to the Fed’s actions, they have at best managed to delay the impact of the coming bankruptcy tsunami.

“This is not a normal recession. The recessionary part of this you’re going to see down the road,” Jamie Dimon said Tuesday. “You will see the effect of this recession. You’re just not going to see it right away because of all the stimulus.”

For once, Jamie was actually telling the truth, and it’s why JPM’s total provisions hit a record $10.5 billion. It was even uglier for Wells, which recorded the biggest loan-loss provision in its history and led to the bank’s first net loss since 2008 as well as a record, 80% cut to its dividend.

Just as unfortunately, as we discussed earlier, Wells is about to suffer much more pain, as the bank has taken just 2.2% allowance for credit losses on its $935BN in loans outstanding as of June 30.

And yet, as Wells itself admitted, it has a nearly $150BN CRE portfolio, where we expect to see tens of billions of impairment before it’s all said and done.

The above is also why we are 100% certain that we will again be right in predicting that we have not yet seen the peak of loss reserves by the big banks.

There is another reason why it’s about to get worse: the propaganda out of the White House has hit a fever pitch, and is touting a sharp economic bounce even as the virus surges again and threatens new waves of lockdowns.

“I don’t see an interruption to the V-shaped recovery,” White House economic adviser Larry Kudlow told Fox News on Monday. “If there is one, I’ll be honest and factful about it. But at the moment, with our fingers crossed and some prayers, I think we’re on track for a very strong second half of the year, probably still 20% growth plus.”

White House cheerleadine aside, loans to companies are souring. Wells Fargo’s nonperforming assets jumped 22% from the first quarter, largely driven by loans to the oil and gas and commercial real estate industries.

To account for the jump in defaults, the bank boosted its reserve for credit losses by $8.4 billion in the period, with more than three-quarters of the increase coming on the commercial side. Citigroup said its roughly $3.5 billion boost to wholesale lending reserves was partly driven by a slew of credit-rating downgrades.

But the biggest reason why credit losses are about to soar is that paradoxically, US consumers have actually been quite well off, and have so far avoided massive personal losses for one simple reason: personal income at the individual and household level has soared thanks to massive government handouts, making this the “strangest recession in history.”

All of this is about to reverse in August once most of the government stimulus programs end. Until then, however, things are better than expected: Citigroup’s non-accrual consumer loans fell 7% from a year earlier. JPMorgan’s total net charge-offs were almost half what was expected.

She is right, but that linkage is about to reinstitute itself with a bang in August and September, when a new wave of covid will lead to millions more in unemployed, coupled with a sharp collapse in government stimulus payments and benefits. That’s when the real crisis will hit.

“We’re just guessing,” Dimon concluded in today’s earnings call. “We are prepared for the worst case.”

No Jamie, you’re not.