Bailing Out Bankers Is Here Again!!! 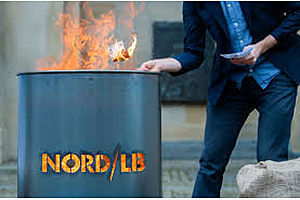 After the financial crisis, Europe’s political leaders put together a complex set of rules to make it harder for future governments to bail out banks. That system is looking so full of holes that one wonders what the point of it is.

Two episodes in a fortnight show that taxpayers are still very much on the hook for the financial system’s losses. At the start of December, the European Commission gave a green light to the rescue of NordLB, a German savings bank, by the governments of Lower Saxony and Saxony-Anhalt; the protection scheme of the German savings bank sector also chipped in.

Then on Sunday, Italy set aside 900 million euros ($1 bn) to recapitalize Banca del Mezzogiorno-Mediocredito Centrale (MCC), a state-owned bank, so that it can save a private regional lender, Banca Popolare di Bari SCpa. Brussels hasn’t yet cleared this rescue plan, but Rome is confident it will. In recent years, Italy has rescued Banca Monte dei Paschi di Siena SpA and Banca Carige SpA. In 2015, the German states Hamburg and Schleswig-Holstein helped HSH Nordbank.

It wasn’t meant to be this way. Between October 2008 and December 2012, European Union governments spent nearly 600 billion euros on recapitalizing banks and other asset relief measures, according to the Commission. The subsequent anger of voters prompted politicians to agree on a single rulebook, putting strict limits on when a government can prop up an ailing lender. The so-called Bank Recovery and Resolution Directive says governments must generally impose losses on shareholders, bondholders and, in some cases, large depositors before they’re allowed to pour in public money.

Some politicians have done everything they can to circumvent the rules. Italy is reluctant to inflict pain on local bondholders, who are often retail investors. In Germany, regional governments refuse to let their banks fail, preferring to fork out billions instead. So while the letter of the new rules still stands, politicians have devised so many exemptions that their spirit is gone.

Take NordLB. The Commission argues that Germany’s regional governments will intervene with the same conditions as a private investor, which will ensure no distortion of competition. Yet the rescue, including a 2.8-billion euro cash injection and 800 million euros in guarantees, appears far more generous than what was on available from the market.

Meanwhile, Italy’s government says MCC will intervene in Banca Popolare di Bari alongside the voluntary arm of the country’s deposit guarantee scheme; and that this proves the rescue is being done under market conditions. However, this interbank scheme has acted repeatedly as a de facto lender of last resort to banks. It’s highly doubtful that any other investors would help out like this.

This isn’t to say the last decade’s banking reforms were entirely in vain. Since 2014 the European Central Bank has taken over from national watchdogs as the chief supervisor of the euro zone’s largest banks. (Unfortunately, less significant institutions such as Banca Popolare di Bari remain under local oversight). The ECB has its own problems — especially in terms of communication and transparency — but it’s usually a tougher policeman than many of its national counterparts.

The bigger problem is that the euro zone’s “banking union” is still fragmented. The Single Resolution Board (SRB), a body within the banking union that’s in charge of winding down failing banks, has an excessively high bar for intervening….

Read the rest of this article on Yahoo Finance (HERE)