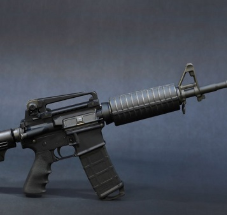 The worst of the numerous anti-gun legislations in Virginia, the so-called “assault weapons ban,” was shot down (sorry, I had to) this morning by the Senate Judiciary Committee, killing any chance of that bill becoming law this year.

The alarming wording of HB961:

It’s pretty unsettling when you watch a billionaire buy a state government.

The most recent election saw Virginia turn blue through rezoning and a whole lot of money donated by none other than presidential candidate Michael Bloomberg. It’s so blatant that even the Washington Examiner referred to this as “Bloomberg’s Gun Ban.”

Virginians protested the outrageous spate of laws by a variety of means, turning nearly the entire state into 2nd Amendment sanctuaries, municipality by municipality, with one county going so far as to form an official militia to preserve gun rights. Tens of thousands of gun owners showed up to protest at the capital on Lobby Day, a protest that was overwhelmingly peaceful despite the governor’s attempt to paint the protestors as violent white supremacists.

Initially, it looked like the efforts would fail when the House blatantly ignored the protests and advanced 9 more anti-gun bills the very same week.

Fortunately, the Senate Judiciary Committee chose the wiser course of action against the most insidious of the bills, voting down HB961 with a 10-5 vote.

Lawmakers voted to table the bill Monday with little debate, while noting that there was confusion over what types of guns would constitute an assault weapon.

“There are obviously a lot of questions about definitions in this bill. Definitions do matter,” said Democratic Sen. Creigh Deeds.

The Senate has now rejected three of the governor’s eight gun-control measures. Moderate Democrats have already voted with Republicans to kill a bill that would make it a felony to “recklessly leave a loaded, unsecured firearm” in a way that endangers a minor, and a bill that would require gun owners to report the loss or theft of a gun to police. (source)

The move was led by Sen. Creigh Deeds, D-Bath, and backed by three other Democrats: Sen. John Edwards of Roanoke, Sen. Chap Petersen of Fairfax City, and Sen. Scott Surovell of Fairfax. (source)

The fight isn’t over.

Several other unconstitutional bills have already passed both the house and the senate, including limiting the purchase of firearms to one per month, allowing cities or counties to ban guns in specific areas, and a red flag law that allows authorities to temporarily remove people’s firearms without due process.

And keep in mind, this vote only tables the bill for the current year. Governor Northam’s office has already said it will be back.

Alena Yarmosky, a spokeswoman for the Northam administration, said in a statement: “While the governor is disappointed in today’s vote, he fully expects the crime commission to give this measure the detailed review that senators called for. We will be back next year,” she said.

“Despite today’s vote, the governor is proud of the several commonsense gun safety measures that continue to advance,” she added. “These bills represent historic steps forward in keeping Virginians safe from gun violence. Make no mistake — they will save lives.” (source)

Virginians would be wise to institute recall petitions immediately for the treasonous members of the state congress who blithely ignored the will of the people to promote the will of Micheal Bloomberg well before this next vote ever happens.

Today was a victory but the fight is far from over.

Article written by Daisy Luther for The Organic Prepper