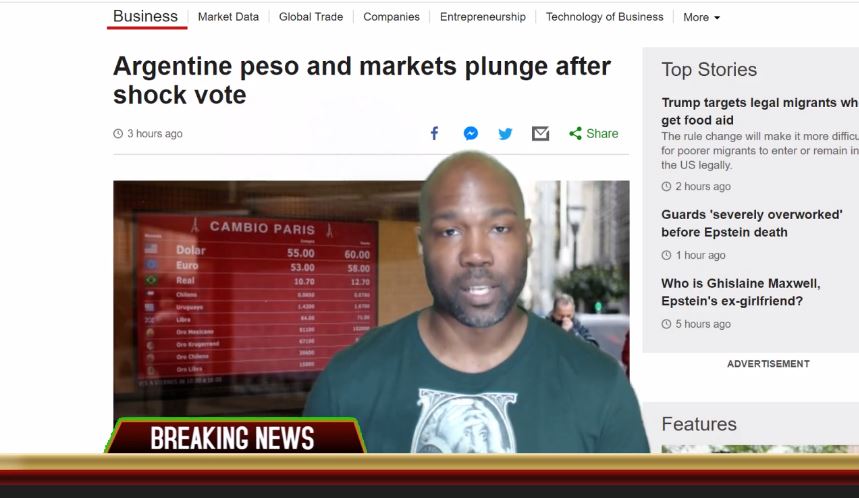 Argentine stock markets and its currency have both plunged after conservative Argentine President Mauricio Macri suffered a shock defeat in primary elections on Sunday.

The peso fell 15% against the dollar on Monday after earlier plunging around 30% to a record low.

Some of the country’s most traded stocks have also lost around half of their value in one day.

At a news conference on Monday, the president also said that the drop suggested the market lacked confidence in an opposition government.

“This [market meltdown] is just a small demonstration of what can happen,” said Mr Macri.

“We have much to do still. Every election is a message and we understood it.”

At end of trading on Monday, Argentina’s main Merval index closed down 31% as some of the country’s largest companies saw their market values plummet.

Cement producer Loma Negra was among those worst affected, with its share price down around 55%. Financial services firm Galicia Financial also saw a 46% drop in its stock value.

The embattled president was defeated by his centre-left rival, Alberto Fernández, who is now seen as the frontrunner for October’s presidential race.

His running mate is former President Cristina Fernández de Kirchner, who presided over an administration remembered for a high degree of protectionism and heavy state intervention in the economy.

Argentina is a country that has suffered with all sorts of economic problems that are taught in textbooks.

But even by its standards, this market meltdown is unprecedented.

In just two hours, a third of the Merval index (which accounts for the most traded stocks in the country) was wiped out in value.

Investors are now pushing the “sell” button, as many believe it will be impossible for President Mauricio Macri to win the upcoming election in October.

If he loses, this will be the end of a pro-business agenda to save Argentina’s economy that has been implemented since Mr Macri came to power in 2015, which includes IMF loans, austerity measures and the end of capital controls.

Sunday’s primaries were seen as vindication for “Kirchnerismo” which have for years denounced Mr Macri’s plan as ineffective. The country is in recession and still suffering with inflation and poverty.

There are still two more months to go until the election – but few believe there will be surprises as big as this one coming up again.

Edward Glossop, from the London-based consultancy Capital Economics, said Mr Macri’s government could pull out all the stops to try to shore up popular support.

This could include easing budget curbs imposed as part of Argentina’s agreement with the International Monetary Fund.

“An outright loosening of the purse strings is possible. The IMF would probably turn a blind eye to this, since it is in its interest for President Macri to secure re-election,” he said, but added: “We doubt that these efforts would be enough to change voter perception.”

President Macri was elected in 2015 on promises to boost Argentina’s economy with a sweep of liberal economic reforms.

But his promised recovery has yet to materialise – Argentina is currently in a recession and posted 22% inflation for the first half of the year, one of the highest rates globally.

More than a third of the country’s population is currently living in poverty, according to official figures.