Are They Going To Impeach Trump Again? 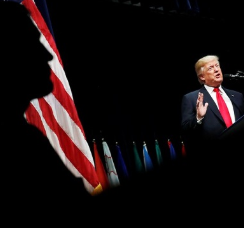 The Democratic candidates held another debate last night. Michael Bloomberg took a lot of heat from the others, and he did not handle it well. He showed real weakness for the first time.

Joe Biden, meanwhile, put in a strong performance last night. We’ll have to see if he can generate any momentum from it. After Iowa and New Hampshire, his campaign is in serious trouble.

Speaking of Iowa, they still haven’t resolved that mess…

The Iowa caucus was officially over on Feb. 3. But it’s not over yet and may never be over.

The conduct of the caucus was one of the biggest fiascos in modern political history and the repercussions are still being felt. You probably know the story by now.

A caucus is not a primary election. It’s a physical gathering of voters at about 1,600 precinct locations such as school gyms and similar venues around the state.

That’s a limiting factor right away because many voters don’t have the flexibility to show up at an appointed time and place. Voters organize in groups backing a certain candidate.

An initial count of support for each candidate is taken. Candidates’ groups who have less than 15% of the total are then told they can either go home or switch sides (with less than 15% support you get zero delegates).

Voters then reorganize — for example, a Biden supporter can switch to Liz Warren — and a second count is taken.

That second count is then used in a mathematical formula to assign delegates for the Democratic convention.

The number of delegates for each candidate is not proportional to votes in the second count because some precincts are overweighted. Got it?

Don’t worry; neither does anyone else. That system is nuts. But it gets worse…

A new mobile phone app was created to send in results. The app had never been used in actual voting and it crashed.

Precinct organizers were told to phone in results. The phone lines were jammed and organizers couldn’t get through. That didn’t matter because party officials in the central locations were told to leave their mobile phones outside.

Others could not get online. Some did not know how to use spreadsheets. TV network anchor desks were on the air with nothing to report.

Candidates were robbed of bragging rights, both on caucus night and in the days leading up to the New Hampshire primary on Feb. 11. Iowa results dribbled out over days in a way that seemed intentionally designed to hurt Bernie Sanders.

Finally, the chair of the Iowa Democratic Party resigned in disgrace.

As of now, it is reported that Bernie Sanders won the most votes in the first and second alignments, but Pete Buttigieg got the most delegates because of the quirky math formula.But even that reported result is not final because a “re-canvass” recount is underway.The biggest loser was not among the candidates. The biggest loser was the Democratic Party itself.

Commentators were quick to ask how Democrats can run the economy if they can’t even count votes in Iowa. Good question.

But could they be so dumb as to actually try to impeach Trump again?

If the Democrat effort to impeach Trump was grounded in political hatred rather than constitutional law, why would the Democrats not do it again?

The answer is that the impeachment efforts are not stopping.

House Democrats are already planning hearings on Trump’s reassignment of Lt. Col. Alexander Vindman and his firing of Ambassador Gordon Sondland, both of whom provided anti-Trump (but incompetent, irrelevant and immaterial) testimony during Adam Schiff’s unconstitutional impeachment show trial.

Other avenues of anti-Trump inquiry include an expected appeals court ruling that may require testimony from former Trump White House counsel Don McGahn, further inquiry into Russian collusion allegations (the hoax that won’t die), possible violations of the Emoluments Clause (despite court rulings dismissing partisan lawsuits against Trump) and pursuit of testimony from John Bolton that was not part of the Senate trial.

In short, there is no shortage of fake allegations on which to base a new impeachment.

We can’t be certain there will be another impeachment this year, but it cannot be ruled out. Impeachment hearings could begin again this spring ahead of a new impeachment vote this summer and a trial in August just in time for the Republican convention.

Another possibility is Trump wins a second term (likely, in my view) and the Democrats keep control of the House, in which case another impeachment in 2021 is a high probability.

This is bad for the country and is actually bad for Democrats, as shown in the polls. Yet the Democrats seem to be the last to know.