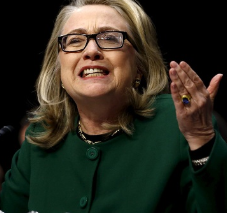 Hillary Clinton still controls the DNC, and in the few days before the Iowa caucus and subsequent fiasco, for a brief moment we lived in a parallel Bernie ascending universe where Democrats could forget that fact.

But now with Bloomberg buying in, Biden going down, Mayor Pete running out of managers to complain to, and an openly hostile campaign against Bernie – it’s time to ask:

What if the DNC has no strong desire to win this election?

Why would the DNC’s billionaire backers or Hillary want to win? Most of the billionaires contribute to both parties, and excepting certain industries, will fare as well in either event. While relationships matter here, the bottom line matters at least as much.

While the corporatist ‘Green New Deal’ would help subsidize another wing of the billionaire class, the dominating big pharma, the health insurance industry, and the military industrial complex are safe with either party in power.

Given the seemingly bizarre behavior of the DNC where they are bent on discouraging their activist base, the question of intentional self-sabotage (or intentional negligence) is a legitimate one.

Primarily this all boils down to the fact that Trump is a highly re-electable incumbent facing four more years, with his entire base of support intact. So it’s questionable that Dems even believe they need a strategy to capture the White House.

Altogether, his prospects are quite strong, with historically reliable and accurate forecasters putting Trump’s chances rising past 60% and still rising.

These chances moreover rose significantly in the same week that Buttigieg prematurely announced an Iowa win which wasn’t, and in which Bloomberg stepped up marketing on his uninspiring campaign.

Of Billionaires and their toys

Billionaire backers are generally interested in maintaining the status quo, and the status quo for billionaires on the balance has not been challenged by Trump. For billionaires in finance and investment, Trump’s success in hooking up their portfolios has quelled previously held fears when big changes in the dealings with the EU and China were announced.

What’s more, with some of those fears ameliorated, they don’t need Hillary per se.

For working Americans, wages and productivity haven’t even risen in tandem since 1976. This means that the Democrats have generally failed a large part of their 20th century constituency. But they have made good on promises for their billionaires.

Sure, there are many industries and all kinds of billionaires, and more – when some stocks go up, others go down. So in approaching the question of the behavior of billionaires, in comparing them to each other we see more differences than common causes. Their common cause is clearer macroscopically, where we can find real class solidarity among them. He who dies with the most toys wins.

So what’s the DNC really up to? Well, it is sufficient to explain that billionaires are neither hurting nor do they hate President Trump. The military industrial complex is also satisfied with Trump, though he has played favorites just as his predecessors have.

There are particular networks that Trump has gone out of his way to punish for their collusion with Hillary. These billionaires like Amazon’s Jeff Bezos (who also owns the racist conspiracy rag ‘The Washington Post’), are genuine in their will to remove Trump.

The DNC’s interest and its billionaire backers, though, are not one and the same. The DNC – that is Hillary – has hand-picked candidates from the Democrat primary field, because similarly to Obama’s administration, Hillary or her first choice will be in the prime spot to act as master of the quid pro quo – power broker and gate-keeper between the billionaires and world of opportunities.

Working against Trump, but also against Bernie and Tulsi and democracy in general, is that Hillary was largely successful in building a coalition of tech giants and online gossipers, conspiracy theorists, trolls, bots, and rats, to come together to pull off the single greatest closure of the internet in its history, within the U.S.

Consequently, the news feeds on Twitter and Facebook are sanitized, users see far fewer messages from their favorite sources. YouTube has gone from netizen vlogging, which was critical in the growth of both Sanders campaign as well as Trump’s, over to a surrogate for mainstream television news and political comedy.

This is leading towards an information dark age, and we should expect the worldview of yesterday’s radicals increasingly degrade and mirror those of low information voters as it did in the time between the invention of the television and the rise of internet. Another sector of ‘hold out’ radicals will be further alienated and radicalized, leading towards adventurism and what will no doubt be charges of terrorism.

Where previously Trump’s apparently radical approach to foreign policy threatened a delicate transcontinental ecosystem of billionaires reliant on the old status quo, Trump was smart to do this as surgically as possible. And more, Democrats certainly had a degree of success in ‘containing’ Trump as it is. So, now we have new facts on the ground and things have settled where they may. Billionaires have fared well indeed.

Conclusion? DNC strategy on the 2020 race must keep their billionaire networks in the game, but there’s no reason to assume the liability of this moment. And what exactly, is that?

A DNC Strategy – Losing: It’s not a bug, it’s a feature

The DNC only maintains a modicum of legitimacy so long as they can point to gridlock and partisan interference from Republicans. That means they really do not want to control both houses and the executive branch at the same time. That happened briefly at the start of Obama’s first term until mid-term elections, and the consequences were terrible for Democrats. This is because Dems had no real intention to carry out Obama’s mandate from the election. Doing so would work against the very real commitments they made to the too big to fail banks, and other billionaires.

Trump will beat any candidate the DNC would dare to run in 2020, and the DNC is aware of these numbers. Trump has filed a lawsuit through the housing department against Facebook for discriminatory advertising, nominally related to out lawed bank red lining. Strip away the details and at base reality it’s a lawsuit initiated by Trump wherein the U.S. government sues Facebook over how and to whom it features ads. See? Likewise, Trump put Twitter on notice, through Twitter and in a tweet itself, that Twitter would be the president’s communication system, particular in matters of notifying world leaders and war. Serious stuff.

The DNC has been very good to billionaires, but so has the RNC. The main difference is that when Republicans favor the wealthy and powerful in their policy and legislation, they do so more honestly. They are genuinely appealing to these billionaires, and to those ‘temporarily out of luck millionaires’ with aspirational delusions.

The DNC, though, has a much more difficult and dastardly job. Clinton summed it up best when she told a secret meeting of billionaire backers during the ’16 campaign that she has ‘two policies’ a public, i.e. fake policy to get her elected and for public consumption thereafter, and a ‘real policy’ which she only discloses to big money backers. This is really how Democrats have functioned since at least the rise of that pernicious cult of greed born of 1980’s vintage neo-liberal individualism.

Ponder that one for a moment. The actual job of the DNC is to make promises like healthcare which reflect the real needs of people with few other options, and then to make sure that these needs do not go addressed.

The DNC operates as a massive cushion, absorber of the popular will. It is not an instrument for its constituency, but a weapon against it. That’s the most sinister thing about the DNC.

So while it’s true that only a Sanders or Gabbard has a chance at winning, it would be a mess in either event should they be nominated by the DNC.

Tulsi or Bernie would have considerable power in the DNC itself afterwards – if the head butting between Obama and Hillary had its moments, imagine Tulsi in a fight against the same Hillary-led DNC.

Worse, in this election year they would create a coattail and down-ballot scenario that would radicalize whole slates of Democrats. Because also in 2020, we have all 435 seats in the House, and 35 of the 100 seats in the Senate up for grabs. So even if the presidential contest was lost to Trump despite Democrat activist energy, the forward radicalization of the houses would carry forward. We may even see Clinton Democrats pushed out by Sanders Democrats.

And where would this populist push of the left lead next? There would be a full-on assault against important American institutions like the prison system, the criminal justice system would also face reform. A new war on poverty and other such great society offerings in the image of Johnson or Roosevelt. Such a reformed DNC itself could really transform into a populist party not particularly of the left per se, we could find space to ‘End the Fed’ and devolve some federal powers to the state level. What we’d find in all of this is an outraged billionaire class down to one party, not two.

That’s simply too interesting, forward thinking, and frankly just too fair for the DNC to even consider. For these reasons, it’s better for the DNC not to seriously fight 2020.

In not fighting, the ‘resistance’ charade can continue, Pelosi could continue to lead the fake charge, and the status quo remains in place. The 2020 elections see Trump re-elected, maybe some minor changes in the legislative branch – the DNC will be happy to so long as they win ‘moderates’.

There’s really few reasons why the DNC would want the kind of Democrat that has a chance to win in 2020, to actually win. For all these reasons, the DNC’s strategy is no error. It’s not a bug, it’s a feature.