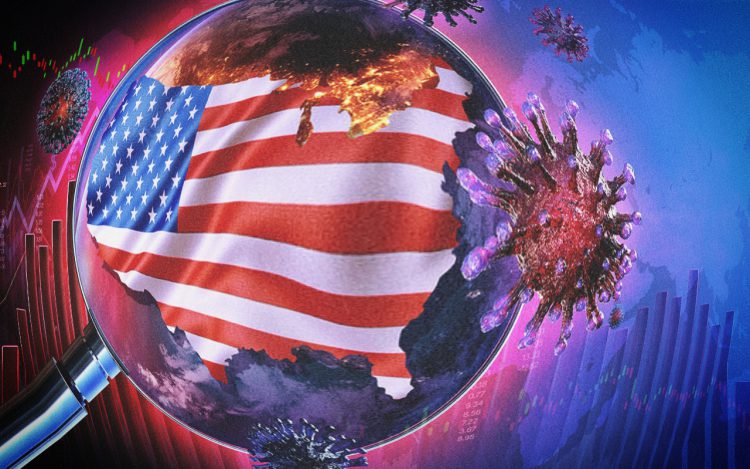 “In order to save the village we had to destroy it…”

As Apple passes through the $2 trillion market cap, I’m hi-fiving myself or correctly understanding how it would successfully weather the Pandemic storm – and I can’t help but wonder when to sell. The speed at which the market wobbled after the Fed failed to make loud enough promises about even more bailout and support ahead, says it all about what’s driving the current market.

Sure, there are lots of analysts and investment banks saying the outlook for stocks is for further upside, and raising their targets for the year. If it happens, I hope they remember to thank the Fed.

The reality is markets are on a spectrum between uber-bears (who always believe everything is going to end badly) and the pixie-dust-upside-prophets who think current market strength is properly discounting an even stronger post-Covid rally and vaccine driven recovery. The truth, as always, is not only out there, but probably lies in-between these extreme views.

On one hand you’ve got the market’s natural exuberance which has been massively encouraged and inflated by QE Infinity. If you are wondering how the Fed buying bonds causes stocks to rise, then its dead simple: the more expensive bonds get because of the QE distortion, it makes higher returns in stocks look relatively more attractive. Stocks might be trading at record P/E ratios and look massively overpriced, but relative to other financial assets (bonds), they still look cheap.

The mistake is to look at bonds and stocks as a closed bubble. For most institutional investors they are – they can’t invest in anything else due to regulations demanding they ensure certain liquidity standards. These regulations assume that in a crisis funds will be able to meet drawdowns by selling financial assets. (Pray to whatever gods you follow we never have to test that particular flat-earth theory – in times of crisis, no matter how much liquidity you think is there, there will never be enough.) Daily liquidity is a recipe for disaster – but any serious fund hoping to raise investment money has to offer it.

Tech stocks have soared because, frankly, they’ve had a good crisis.

Others… not so much. Airline stocks – for instance Qantas dropping a $1.4 bln loss this morning but looking forward to resuming flights to the US sometime in the next 3 years (!!!) – are good examples of firms having a not-so-good-crisis.

The market is not stupid. Data compiled by Deutsche bank shows new money and flows into the equity markets is almost all going into Tech or healthcare – the rest of global commerce is essentially flatlining or negative. If your cash is invested in index-followers on the basis the rising Tech tide will lift all boats – then beware, it’s a false connection. These stocks could be dragging for years. (And explains why a V-Shaped recovery was never realistic.)

Of even greater concern is what is going on in debt.

As I mentioned earlier this week, its going to be a record year for the new issue markets. I was talking to a fund manager yesterday and we talked about that theme. Companies are borrowing as much as they can because of Covid, but despite the liquidity pledges of central banks to buy corporate debt under QE Infinity schemes, liquidity in secondary markets is effectively zero. (In order to save liquidity, the central banks have destroyed it!) Fuelling the corporate debt binge at 2% yields is institutional investors who have no-choice but to buy whatever corporate crud the primary market investment banks are offering simply to keep their allocations on line.

It’s another recipe for disaster on two fronts:

First, duration is increasing as returns are diminishing. (For equity investors: Duration is a simple way to measure of the risk of a bond and its maturity.) Effectively investors buying todays primary market are receiving a lower return for taking greater risk for longer. That does not sound sustainable. Take a look at Apple’s 40 year bond yielding 2.5%.

Second, credit quality is crashing. It’s not just zombie companies (now reckoned to be 18-23% of the total US/UK and European markets), but also the number of firms on the falling angel ledge… about to plummet from investment grade into junk. The bulk of corporate issuance is from this BBB+ sector. Meanwhile, even the rating agencies acknowledge that despite zero interest rates – defaults are rising.

That begs a question about the QE Infinity programmes.  It’s fair to say that if central banks had not stepped into with their liquidity guarantees at the depth of the March Meltdown, we would now be looking at a dystopian shattered landscape of busted companies and a banking collapse without precedent. Full marks to the Central Banks for acting quickly and decisively..

But.. we’ve had QE in place for over a decade (less in Europe), and it’s not really helped except to keep rates low. Flooding financial markets with liquidity has not accelerated economic growth, or an economic boom. Moreover, QE has not created the inflation central banks have been looking for to magic away their debt mountains.

QE has made corporate debt dirt-cheap, which meant firms around the globe have loaded up on debt – to fund stock buy-backs! Not growth. All that QE money was cycled round the financial markets and into the hands of stock-holders and company executives awarding themselves ever bigger bonuses for hiking their company’s stock price.

Will it be any different this time? I read the volume of stock buybacks has diminished – but one of the reasons Apple is doing so well is that $8 bln it just raised from the bond market for “general purposes” comes as it accelerated its stock buybacks.

This year we will see global corporates raise some $4 trillion from the debt markets – ostensibly to fund themselves through the Pandemic. I read a great interview with sage investor Lacy Hunt: “The Pandemic will eventually go away, but the debt will still remain.” He went on to describe how: “Debt is a double edged sword: it’s increasing current spending in exchange for a decline in future spending unless it generates an income stream to repay debt and interest.”

Stock buybacks – $9.2 trillion of them over the last 10 years in the US – generate zero in terms of future income streams.

Debt has to be repaid from future earnings. It acts as a break on company plans and expansion. My fund manager chum describes debt effectively: “heavily indebted companies raising more debt is like pouring wet cement into their firms. When it sets its like concrete, stopping growth.”

Thus far all the monetary shenanigans of QE has been kept within the closed loop of financial assets – that’s where there has been massive inflation. We haven’t seen real-world inflation yet. Will it happen?

Central Banks are wrestling with the consequences of the debt and stock market bubbles they have created, the damage they’ve done to economic evolution by keeping zombie companies solvent when they are no longer “going-concerns” (which is illegal by the way… just saying..) and the societal damage that’s becoming apparent as individuals discover the pension pots are now worth the square root of zero.  One hope is that inflation will make the debt problem go away – but who else remembers the Stagflation of the 1970s?

The other is the hope that MMT (Modern Monetary Theory) will make it all go away – allowing governments to freely print money without consequences.. Yeah.. you know how well that is likely to play out.. Apparently the ancient Egyptians had a phrase along the lines of “no such thing as a free lunch”.

Authored by Bill Blain via MorningPorridge.com,