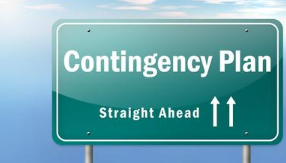 On the heels of JPMorgan’s decision to begin its resilience plan, a number of the rest of US’ majors have also started their own contingency plans:

Would all these banks be doing this if the risk from this virus was, as we are being told, low?

As we detailed yesterday, America’s largest bank is going on lockdown…

And today has seen JPMorgan escalate their resiliency plan by sending some of its New York and London sales and trading staff to backup locations in response to the coronavirus.

“We are starting to shift people as a precautionary measure at this stage,” the bank said Thursday in a memo to staff.

“Dividing our workforce into different locations improves our ability to serve clients continuously while reducing the health risks associated with physical contact should a case arise.”

Reuters reports that Brian Marchiony, a bank spokesman, confirmed the plans and said they are “precautionary.”

And this comes after we noted yesterday that, according to Bloomberg, JPMorgan is asking thousands of US-based employees to work from home in test of “virus contingency plan” for closing domestic offices should the coronavirus spread. As part of the test, managers have requested that about 10% of staff across its consumer bank work remotely as part of the plan’s resiliency testing, which has been code-named “Project Kennedy” (it wasn’t clear why JPM picked that name for the project). And since JPMorgan’s consumer bank has 127,137 employees, the most of any of the firm’s divisions, that means that over 12,000 workers will be working from home for the foreseeable future.

As the coronavirus spreads, banks around the world have been scrambling ensure they can keep their businesses running and avoid a worst-case scenario by restricting travel, splitting up teams and traders amid different locations, and quarantining staff. As Bloomberg notes, some are also “dusting off regulatory plans for keeping “critical operations” open through a potential pandemic, some of which describe things like how far apart traders should sit from each other, or how many can work remotely.”

The key test for JPM’s will assess its telecommuting policy on a sampling of employees across businesses to ensure kinks are worked out before the plan needs to be rolled out more broadly in the event of a pandemic, one of the people said.

In other words, JPMorgan thinks it’s just a matter of time before it gets… worse.

It wasnt exactly clear how JPM’s client-facing bank tellers will do their job by teleconference. While technology has made it possible for more professionals to do their jobs remotely, working from home generally isn’t an option for branch workers like tellers and bankers who deal directly with customers. JPMorgan had 4,976 branches around the country as of the end of December that are filled with thousands of employees who have to show up to work for business to run.

JPMorgan’s leaders have been double-checking contingency plans to be sure the firm can continue to serve customers in the event of widespread disruptions.  The moves are part of broader resiliency planning at the bank. The firm last week followed the lead of major US corporations in restrictring non-essential international travel for all employees and has been urging workers to test their remote-access capabilities.  JPMorgan has also been testing systems at backup trading sites over the past few days in case workers need to be moved off of the main trading floors in New York and London.

There is a silver lining: with hand sanitizer sold out virtually everywhere, the bank is providing that precious commodity – extra hand sanitizer – to customer-facing branch workers and taking extra steps to sanitize offices, branches and equipment, including elevator call buttons and door handles, according to a memo from Co-President Gordon Smith to consumer bank staff on Friday.

And just to nip any potentially viral problems at the bud, JPMorgan has been encouraging consumers to access bank services and products through digital channels instead of walking into branches when they can.

“This can make their life easier all the time,” Smith wrote.