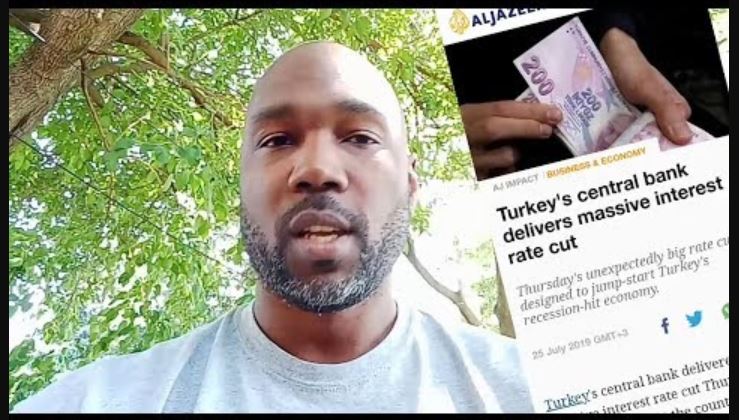 Federal Reserve policymakers on Wednesday cut the benchmark Federal Funds rate by 0.25 percentage points to stimulate economic growth, in the first reduction since the financial crisis of 2008. The Fed’s monetary-policy committee lowered the Fed Funds rate’s target range to a 2%-to-2.25% range.

“This action supports the committee’s view that sustained expansion of economic activity, strong labor market conditions, and inflation near the committee’s symmetric 2% objective are the most likely outcomes, but uncertainties about this outlook remain,” the central bank said in a statement announcing the cut.

But President Trump tweeted, “As usual, Powell let us down, but at least he is ending quantitative tightening, which shouldn’t have started in the first place…” and “I am certainly not getting much help from the Federal Reserve!”

….As usual, Powell let us down, but at least he is ending quantitative tightening, which shouldn’t have started in the first place – no inflation. We are winning anyway, but I am certainly not getting much help from the Federal Reserve!— Donald J. Trump (@realDonaldTrump) July 31, 2019

The move was widely expected by traders, although some forecasters had thought the Fed might make a deeper rate cut of 0.5 percentage points, while others said a cut wasn’t needed at all due to the economy’s strength.

In fact, in a sign of growing disagreement on the Fed’s monetary-policy committee, two of the 10 voting members at this week’s meeting dissented from the majority decision, arguing to keep rates unchanged.

“The Fed’s first rate in more than a decade had been widely expected, yet divides the markets’ opinion,” Tom Elliott, international investment strategist at the financial consultancy deVere Group, said in e-mailed comments.

The Fed also announced an early termination of a plan to reduce the size of its balance sheet, providing an additional source of monetary-policy easing. The plan will terminate in August, two months earlier than previously announced.

The central bank cut rates even as the U.S. economy is expected to grow by a solid 2.5% this year. However, economists have said that an unusually low inflation rate has left room for the Fed to lower rates without sparking a surge in consumer prices.

The latest decision comes amid growing signs that Trump’s trade war is slowing the global economy, in turn sparking concerns that U.S. growth might suffer.

During a press conference after the Fed’s decision was announced, Powell said that the trade war appears to have cast a pall over financial markets, dimming sentiment and prompting some businesses to cancel or delay some investments.

“There isn’t a lot of experience in responding to global trade tensions, so it is something we haven’t faced before, and we’re learning by doing,” he said.

When asked about the potential for future rate cuts, Powell suggested that the central wasn’t committing to additional rate cuts anytime soon.

He said he sees the latest move as a “midcycle” adjustment to monetary policy, coming in the middle of an economic expansion. That was contrasted with the “beginning of a lengthy cutting cycle,” which is “not our perspective now.”

But when asked later during the press conference to explain the apparent discrepancy between his “midcycle” characterization and the expectation in financial markets that the Fed could cut rates by another 0.5 percentage point by January.

“I didn’t say it’s just one” rate cut, Powell said. “What we’re saying [is that] it’s not a long cutting cycle. … You would do that if you saw real economic weakness and the Federal Funds rate had to be cut a lot. That’s not what we’re seeing.” The Fed chair added that the central bank is currently “ruling out” a long cycle of multiple rate cuts.

Powell’s remarks about limited rate cuts disappointed Wall Street, as low interest rates generally help stocks by making them more attractive than bonds. The Dow Jones Industrial Average dipped as much as 478.4 points following those comments from Powell, although the index later partly recovered to close at 26,864.27, down 333.75 points.

Trump also tweeted that the financial markets wanted to hear it was just the beginning of a rate-cut cycle.

What the Market wanted to hear from Jay Powell and the Federal Reserve was that this was the beginning of a lengthy and aggressive rate-cutting cycle which would keep pace with China, The European Union and other countries around the world….— Donald J. Trump (@realDonaldTrump) July 31, 2019

Trump, who is running for re-election in 2020, has repeatedly called for lower interest rates, describing the Fed as “incompetent” despite having appointed Powell to lead the central bank in early 2018. Earlier this week, Trump said on Twitter that he expected the Fed’s rate cut to be too small.

Typically, the Fed raises rates to cool activity when the economy is straightening and cuts them when an economic slowdown threatens to drive up unemployment. But the bank has been confronted with a confusing mix of economic data this year, with unemployment close to a half-century low but inflation still well below the Fed’s 2% target.

Usually, when unemployment is low, inflation shoots up because businesses have to increase wages to attract and retain workers and then try to pass those costs along in the form of higher consumer prices.

Central-bank officials acknowledged the economy’s strength on Wednesday. “Information received since the Federal Open Market Committee met in June indicates that the labor market remains strong and that economic activity has been rising at a moderate rate,” according to the Fed’s statement. “Job gains have been solid, on average, in recent months, and the unemployment rate has remained low.”

But in arguing for a cut, officials cited “soft” investment spending by businesses on such things as factories, equipment and technology. They also cited “the implications of global developments for the economic outlook as well as muted inflation pressures.”

Article to this post originally appeared on TheStreet.com here…

Watch more RTD Quik Take videos like this one here….