A Look At COMEX Palladium 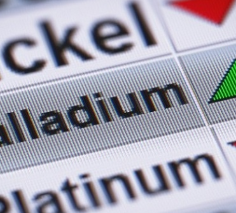 As you know, we’ve been following the palladium story for over two years now. It is very important to understand that this is NOT a speculative, COMEX story.

Instead, this is a physical supply story that emanates from London. To that end, today let’s review the COMEX data to see how The Banks are responding in this futures-only market.

Let’s begin with the chart below. This is a weekly chart of spot palladium that goes back to early 2017. Back then, price had yet to eclipse the old all-time highs near $1100 that were set in 2001. Note the placement of the five arrows that we’ll explain below.

The first arrow denotes February of 2018, just after palladium had tried and failed to break to new all-time highs. At that point, many of the expert generalists were calling for a “double top” and an imminent price collapse. Obviously, that didn’t happen and it’s instructive to observe how the market-making Banks have responded in the time since.

Below is the CFTC-generated Bank Participation Report for February 2018. This report summarizes the GROSS positions of the US and non-US Banks that operate in each market the CFTC allegedly oversees. As you can see below, as of February 2018, the COMEX palladium market was structured similarly to gold, silver and platinum…in that The Banks we NET short over half of the total open interest. The sixteen Banks were NET short 15,117 COMEX palladium contracts versus a total open interest of 32,330 contracts representing 3,233,000 ounces of digital palladium.

And here’s the weekly Commitment of Traders Report from that same day. Note that your usual “Producer/Merchant” and “Swap Dealers” are massive short while the Large Spec “Managed Money” category is NET long.

As we now know, the global supply squeeze only accelerated in 2018 and price did NOT double top. Instead, it kept climbing higher and, one year later, it was UP 50% at $1500. How did The Banks respond? Here’s the BPR for arrow #2 in March 2019:

Note that BOTH total contract open interest AND the Bank NET positioning has fallen. Again, this shows you that the price move is NOT driven by a rush of Spec cash getting long. Instead, COMEX positioning is decreasing and The Banks have used this time to lessen their short exposure.

Fast forward to arrow #3 in early July of 2019. Note that price appears to be double-topping again, this time near $1600. How does the combined Bank position look now?

As you can see, the Bank NET position had grown versus March but this was only due to long selling. And let’s check the Commitment of Traders again. Below you should note that the “Managed Money” category has trimmed their long position by over 30% since February of 2018.

Let’s move forward now because this is where things begin to get interesting and noteworthy. We know via David Jensen that physical supply of palladium in London is extremely tight with one-month lease rates recently reaching as high as 36%! Scotiabank also recently reported that total above ground stocks of palladium may completely disappear by this summer. We wrote about this a few weeks ago and, if you missed that post, you should read it now:

The fourth arrow on the chart points to November 2019, when price was beginning to approach $2000 for the first time in history. And what did that month’s BPR reveal? Very little change in Bank positioning versus July and $1500. Clearly, The Banks were not yet nervous about their COMEX exposure. They’d trimmed a few shorts and added a few longs yet they remained NET short 8,429 contracts….close to where they were in March.

So now let’s get to our final arrow and the point of this post.

Last Tuesday, February 4, saw the most recent CoT and BPR surveys. On that date, spot palladium closed at $2423 and, though lease rates had eased a little to 13%, the physical shortage in London is persisting. What did the BPR reveal? Are The Banks finally beginning to get nervous? See below:

Now at just 4,557 contracts NET short, this is by far the smallest Bank position we’ve seen. Go back to the top of this post and note that the Banks have now trimmed their NET position by 10,560 contracts or about 70% since February 2018.

And now let’s check the latest Commitment of Traders report and compare it to two years ago, as well. See below:

You should be CERTAIN to note the most significant changes.

• The “Managed Money” category…you know the ones whom The Generalists assume are driving a speculative bubble…have trimmed their NET position by over 50%.

• The only remaining NET shorts are the “Producer/Merchants”, the supposed hedging of actual palladium miners.

Since it’s highly unlikely that major Speculator buying will return to COMEX… the position limit is just 50 contracts and likely to be cut lower if the pending position limit rules go into effect …The Banks appear to be getting nervous and finally exiting their long-held short positions. And why wouldn’t they? If, as Scotia suggests, available above-ground palladium is disappearing, would YOU want to be on the hook for physical delivery?

And note that total COMEX palladium open interest remains above 23,000 contracts. At 100 ounces per contract, these derivatives represent a potential obligation to deliver 2,317,800 ounces of palladium. But how much physical palladium is held in reserve at the COMEX vaults? Just 34,766 ounces! This means that there are about 67 pretend trading ounces for every physical ounce in the vaults. With physical supply evaporating, again we ask, would YOU want to be short and potentially on the hook to deliver metal you clearly don’t have?

So in summary, let’s be sure to watch the COMEX palladium VERY closely in the weeks and months ahead. The net positioning of The Banks on COMEX may indeed foreshadow an approaching force majeure or delivery failure in either New York or London. And if the LBMA/COMEX palladium market collapses, will this event lead to a crisis of confidence in the similarly-structured LBMA/COMEX gold and silver markets? We’ll see….