A Fearful Fed Keeps Pouring Money into the Repo Market 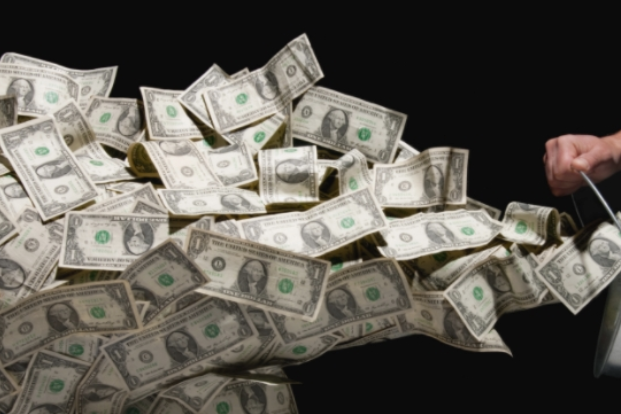 The Fed announced on Thursday it is adding another $83 billion in “in temporary liquidity to financial markets.” And, in a development that will surprise no cynic anywhere, the Fed also noted that it “may keep adding temporary money to markets for longer than policy makers had expected in September.”

Specifically, this was another move to shore up and bail out the repo market, which has required the Fed’s ongoing revival of quantitative easing (but don’t call it that!), which has been going on since September. Thursday’s move adds even more to the Fed’s balance sheet. The Fed’s total assets had been falling since early 2015, but last September the Federal Reserve again began buying assets in an effort to funnel money to the repo market. As Reuters reported at the time:

Cash available to banks for their short-term funding needs all but dried up earlier this week, and interest rates in U.S. money markets shot up to as high as 10% for some overnight loans …

That forced the Fed to make an emergency injection of more than $125 billion … its first major market intervention since the financial crisis more than a decade ago, to prevent borrowing costs from spiraling even higher.

According to Caitlin Long, this tremor in the repo market was likely triggered by the fact that

Somebody — probably a big bank — need[ed] cash so badly that it [was] willing to pay a shockingly high cost to obtain it.

This happened in spite of the fact that repo loans are supposed to be among the loans with the lowest interest rates, because they are secured by supposedly low-risk collateral like US Treasurys. Repo loans involve a borrower temporarily trading an asset (usually government debt) in exchange for cash. Since the borrower is trading a low-risk asset, the interest paid to the lender is low as well.

But, in spite of all this alleged low risk and alleged high demand for US Treasurys, repo-market lenders decided they were unwilling to make loans at the usual rock-bottom interest rates. Given the Fed’s ongoing intervention, it looks like the interest rate that would prevail in the marketplace — were the Fed to stay out of it — is much higher than monetary policymakers are willing to tolerate in their pursuit of ensuring easy money. Thus, the Fed has decided to buy up more government debt itself so as to inject more money into the system and bring interest rates back down.

There are at least two reasons why this could be happening — and why another flare-up in the market is likely.

The first is that demand for government debt may not be as high as people think. As the Congressional Budget Office reported Wednesday, the “deficit increased 12% over last year during the first quarter of fiscal 2020, jumping $39 billion to $358 billion.” This is 12 percent above 2019’s already-sky-high deficit levels in a year where just the deficit topped a trillion dollars during an expansion. This was quite a fear, and illustrated just how immense current deficit spending is in historical context.

That sort of deficit spending requires a lot of new government debt. And with all that new debt coming into the system, it may be that not everyone is willing to trade cash for it at quite the same rate as in the past. This adds to the stress on those who rely on easy and low-interest loans through the repo market. According to Bryan Chappatta at Bloomberg back in September:

The chaos in repo markets was a long time coming given the widening U.S. budget deficits and the lenders that are financing that shortfall. …

Deficits, while nothing new, add up over time. And while they declined each year from 2011 through 2015, both overall and as a percentage of gross domestic product, the gap has widened again under President Donald Trump. Put it all together, and the amount of U.S. Treasury securities outstanding has roughly tripled since the financial crisis:

This growth was mostly under control in the years after the financial crisis because the Fed had been buying up large chunks of the Treasury market through its quantitative easing programs.

Naturally, this helps prop up demand for government debt. Foreigners, however, have grown less enthusiastic. According to Reuters,

Foreign investors sold a record amount of U.S. Treasury bonds and notes for the month of December. … December’s outflow was the largest since the U.S. government agency started recording Treasury debt transactions in January 1978.

It would likely be wrong to say that foreign holders of debt are dumping US debt, or that demand looks like it’s about to collapse. After all, benchmark US ten-year Treasury yields actually fell in December. Nonetheless, it appears doubtful that foreign demand can keep up with the constant waves of new debt being demanded by US lawmakers for ever more deficit spending.

There are simply too many bonds (or, in the language of the repo market, “collateral”) sloshing around in the financial system and not enough cash on the other side of the trade. … Without the Fed helping to finance deficits by accumulating Treasuries, the financial system seems doomed to seize up. Someone has to take what the Treasury is offering.

After a few years of the Fed easing up on asset purchases, it wouldn’t be shocking if the ongoing tsunami of new debt led to a cash problem in the repo markets. In fact, a December report from the Bank of International Settlements (BIS) made a connection between a heavy load of Treasurys and a lack of dollars, especially in light of growing needs for funding at highly leveraged hedge funds:

US repo markets currently rely heavily on four banks as marginal lenders. As the composition of their liquid assets became more skewed towards US Treasuries, their ability to supply funding at short notice in repo markets was diminished. At the same time, increased demand for funding from leveraged financial institutions (eg hedge funds) via Treasury repos appears to have compounded the strains of the temporary factors.

It makes sense now to pursue more cash and fewer Treasurys. The BIS report also suggests these large amounts of government debt in the banks’ portfolios really only made sense during the Fed’s ongoing quantitative easing. But in mid-2019 — with the Fed no longer buying up assets — Treasurys were increasingly becoming a problem. A higher demand for dollars ensued, and the repo market seized up.

The Hidden Risks behind Government Debt

There’s another problem with Treasurys. It turns out they’re not as low-risk as many assume, but not in the way many think. Long writes:

For every US Treasury security outstanding, roughly three parties believe they own it. That’s right. Multiple parties report that they own the very same asset, when only one of them truly does. To wit, the IMF has estimated that the same collateral was reused 2.2 times in 2018, which means both the original owner plus 2.2 subsequent re-users believe they own the same collateral (often a US Treasury security). …

This is the real reason why the repo market periodically seizes up. It’s akin to musical chairs — no one knows how many players will be without a chair until the music stops. Every player knows there aren’t enough chairs. Everyone knows someone will eventually lose.

Financial regulators can’t publicly admit to this, but big banks know it’s true — and that’s why they hunker down (and stop lending) when they sense one of their kin is in trouble.

Financial markets are complex things, so it’s unlikely that the repo market’s ongoing need for easy Fed money is due to any single cause. But as Thursday’s announcement of additional cash injections from the Fed suggests, financial institutions are happy to trade in Treasurys for cash. The Fed is providing the cash, but it’s unclear how many others are willing or able to do so.