A Date and Time for “Financial Armageddon?” 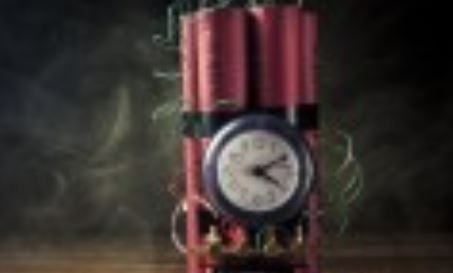 I have read your emails and joined some of your services over the last 10 or more years.

I have put up with your ramblings about the financial world coming to an end pretty much over that same time.

Here is a fact. Nothing has happened since and though no doubt it will one of these decades, if people had listened to you, they would have buried their money with zero return, unlike the markets, which continue to go up. Who cares how or whether it’s wrong or right? It still is going up.

After a while — I mean a long, long while — your dire warnings fall on deaf ears. So unless you can provide a date and time for financial Armageddon, I will continue to reap rewards from fools, be they the Fed, federal government or the debt-ridden world.

We can spare Mr. H. needless suspense. We never can give out the information he seeks: “a date and time for financial Armageddon.”

Nor — for the matter of that — can anybody else, the claims of false prophets notwithstanding.

“You will know neither the day nor the hour”… as the Good Book reads.

Not even the Son of God Himself knows — by His own admission.

But the reader’s tort against us contains justice — by our own admission.

Day upon day, year upon year, we moan about the (increasingly) debt-ridden world. We holler against the Federal Reserve…

How many phantom wolf sightings can a fellow endure? He eventually turns a deaf ear… as our reader has turned a deaf ear to us.

“Who cares how or whether it’s wrong or right,” he razzes us. “It still is going up.”

We cannot deny it. The market is still going up — despite our impeccable reasoning, despite all the angels of hell.

We certainly credit the Federal Reserve for the market’s recent spree. It has expanded its balance sheet obscenely since September. Let us briefly reintroduce the evidence:

But let the record reflect:

We have only questioned its authenticity… and its justice.

The stock market should be a scene of free and open combat. Bull and bear, bovine and ursine, let them meet on fair and neutral ground.

There they can settle their quarrels under honest competition.

A scrupulously impartial judge should referee the bout. His lone concern should be the equal application of martial justice.

He must hold the scales even.

And may the winner emerge fair and square, his hand raised in honest victory.

Should it be the people’s champion, the bull, so much the better.

Justice, that is… would be done.

The Fed Rigs the Fight

The Federal Reserve is not a neutral referee in this bout. It is rather an active participant, in active conspiracy with the bull.

How does it influence the outcome?

Before the bout it packs the bull’s gloves with iron. And once the action commences…

If the bull strikes beneath the belt, if he bites in the clinches, if he punches after the bell has rung…

This rogue referee instantly loses his powers of vision. He sees nothing.

And if the bear smites the bull down to the canvas, witless, leaving him to take the count?

Then this corrupto stretches the count until the sprawling bovine can regain the vertical… and his wits:

Meantime, should the bear absorb but a glancing blow, the official declares him loser by technical knockout, the victim of a mighty clout.

What we have then, is not a contest of one against one. We have instead a travesty of two against one.

The badly used bear is denied all chance of victory.

Yes, the crowd roars its approval. Even our reader, though recognizing the wrong, applauds reluctantly this holocaust of justice.

He does — after all — have a wager on the outcome.

But we confess it. Our sympathies go the other way…

There exists a force deep down, within the liver and lights, that wants it square — that demands honest justice.

And so a fellow leans naturally in an underdog’s direction… and away from the lawless overdogs.

In this instance, he leans toward the underdog bear.

“Fīat jūstitia ruat cælum” is the cry on our lips — “Let justice be done though the heavens fall.”

One day they may. But how much more injustice must the bear endure?

Give him his chance, we say. Else we will never know the rightful winner.

Meantime, we must file a scorching caveat against one of our reader’s claims…

Bury Your Money With “Zero Return?”

Had people taken aboard our advice, says our reader, “they would have buried their money with zero return, unlike the markets, which continue to go up.”

But we have never suggested anyone bury his money… or his head.

Each issue of The Daily Reckoning links to insightful financial research. It serves one purpose: to show you how to profit from today’s markets, rigged or not rigged.

A portion of it — by some miracle of God — somehow succeeds.

Yes, it is true we have recommended gold. Gold offers zero yield — and even lesser thrill.

But if you sank your money in gold instead of stocks… have you really buried it?

The stock market is denominated in dollars. But today’s dollar — relative to the pre-1971 gold-backed dollar — is a wasting asset, a sawdust asset.

Use gold as your yardstick then. You will discover the market’s nominal dollar gains pack far less wallop than commonly supposed.

In terms of real money — gold-linked, pre-1971 dollars— stocks have been losing ground since the start of the millennium…

In gold terms, the Dow merely retraced half of its losses. You could buy the Dow with 40 ounces of gold in January 2000. By January 2011, the Dow 30 stocks would cost you only 8 ounces.

In other words, stock investors had lost 80% of their money. Then in the following run-up — fueled by extravagant and nutty efforts to inflate asset prices — the Dow-to-gold ratio rose to 22. At that point, stock market investors had recovered about half of what they lost — a classic bear market bounce…

And right now, [gold is] telling us that the stock market is worth less than half of what it was worth 20 years ago.

In gold terms… the stock market is worth less than half of what it was worth 20 years ago?

Thus any money “buried” in gold has been up and doing, busy, putting in hard service.

Will it finally reclaim it all? Alas, no.

“Financial Armageddon” closes in on the stock market. When can you expect it?

by Brian Maher via Daily Reckoning