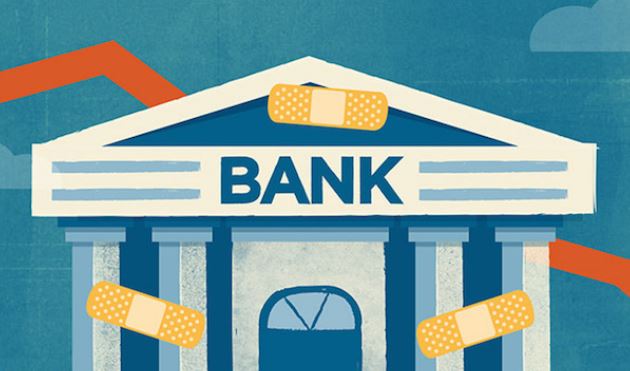 Most people are too busy with their day to day lives to know about the current G20 Bank Bail-In law of our land. These supranational financial laws have been on the books for now roughly 5 years of time.

Under them, mega-bank derivative bet winners also know as first in line secured creditors, they stand to first inherit the assets of any large potentially failing derivative betting mega-bank. According to Bank Bail-in Laws, to the winning derivative bet first go the spoils and leftovers.

Those who had unsecured deposits with a potentially failed global systematically important bank or G-SIB.

Well let’s have a look at the FDIC’s latest updates to garner a better understanding of what is happening there.

In the USA, like virtually all national bank deposit insurance schemes, we are too running a confidence game against potential future bank runs.

Current FDIC bank deposit insurance promises up to $250,000 per depositor, per FDIC-insured bank, per ownership category.

For viewer convenience, here is a basic category-by-category overview of FDIC deposit insurance coverage from their website.

In terms of the FDIC’s latest balance sheet through the middle of this year 2019. They have just over $100 billion saved to insure about $7.5 trillion leaving just over $5 trillion of US domestic deposits which are likely over the $250,000 threshold, uninsured.

It is unlikely that your local bank or savings thrift is the big national issue. It is more about the derivative betting mega-banks and the growing illusion of competition within our crony capitalistic banking system, that deserves a further flush out here.

Since just before the 42nd US President Bill Clinton repealed the Glass Steagal Act, the United States then had over 10,000 FDIC insured deposit banks and financial institutions.

Today that number has halved to just over 5,000 FDIC banks.

US Congress’ Committee on Financial Services noted in a Memorandum late last month, that from 2006 through the end of 2017, over 3,800 bank merger applications were submitted to the private Federal Reserve.

Not even one of these thousands of bank merger applications was rejected by the Federal Reserve over an 11 year time span which included the global financial crisis that peaked with the failures of Bear Sterns and then Lehman Brothers.

Currently today, just six Wall Street mega-banks: JPMorgan Chase, Bank of America, Citigroup, Wells Fargo, Goldman Sachs, and Morgan Stanley. They collectively hold approximately 48% of US bank assets and deposits. The other 5,000 plus smaller banks and thrifts, they make up the remaining 52%.

If anyone of these large derivative betting US based banks were to somehow fail, dubious at best to believe the FDIC could make most unsecured depositors whole.

Onwards to some important news from this week.

The former BIS power behind the 2014 G20 Bank Bail-in Law, the Bank for International Settlements or BIS had an interesting take on what is driving the now over $5 trillion in notional short term overnight REPO loans, that the NY Federal Reserve has has had to make since September 16th, 2019.

This week also making headlines was financial system plumbing expert, Zoltan Pozsar of Credit Suisse stating that the Federal Reserve will likely have to begin official QE4 by the end of this month December 2019, due to lacking foreign exchange swap market liquidity and G-SIB balance sheet constraints year end.

Sounds alsp like the mega-banks want to dump bad coupons on the Federal Reserve’s expanding balance sheet. Who would ever put anything beyond the major banks aside from their bonus yielding self-interest these days?

Both this Credit Suisse and the former BIS report on what is contributing to the overnight REPO loan saga ongoing, got so much financial market attention, the Federal Reserve literally had to plant the question in their press conference this week.

For about 2 minutes here, Federal Reserve chairman Jerome Powell reiterates the Fed’s talking points that the ongoing Repo Loan saga is not going to affect the global macroeconomy.

But when referencing the end to this year, note that he leaves the door wide open for further Federal Reserve balance sheet expansion and financial market interventions to come.

Oh wait a second, right before finishing this video they NY Fed published a partial Unsolved Mystery update to their end of 2019 plans.

It appears instead of QE4 the Federal Reserve is going to flood the overnight REPO loan market with more liquidity than ever before with promises of over $500 billion in swinging loans to come through middle January 2019.

Will this be enough to stave off major market volatility at the end of this calendar year?

Only 3 weeks to find out.

Will this additional not-QE4 blow the Fed’s balance sheet above the all time high of $4.5 trillion on its way to eventaul doubling next decade?

Come back in ten years from now, to find out this ‘Unsolved Mystery.’

Seriously though, you probably remember too, it was only this past Christmas eve-eve last year in 2018. When the US stock market had rolled over nearly -20% and the US Treasury Secretary Steve Mnuchin while vacationing in Mexico announced on twitter that he had spoken to the US heads of the 6 mega banks. The same 6 investment banks who we already mentioned by name. Ones who own about half of the US banking industry’s assets today.

In that late 2018 tweet, the US Treasury Secretary also mentioned his key then upcoming phone call with the President’s Working Group on financial markets (the plunge protection team as some quaintly refer to it).

You can again reread what information that tweet contained.

For myself, this remains the fin twit, tweet of the two thousand and tens decade.

It tell you how precarious this supposedly best economy ever remains.

As we again reach new nominal highs in the S&P 500, you can choose to bet on these people, having your back and best interest if you like.

I and many of our clients will prudently continue hedging our long term savings with physical precious metal bullion products as we look forward to the new year and a new decade to come.

That is all for this week.

by James Anderson for SDBullion